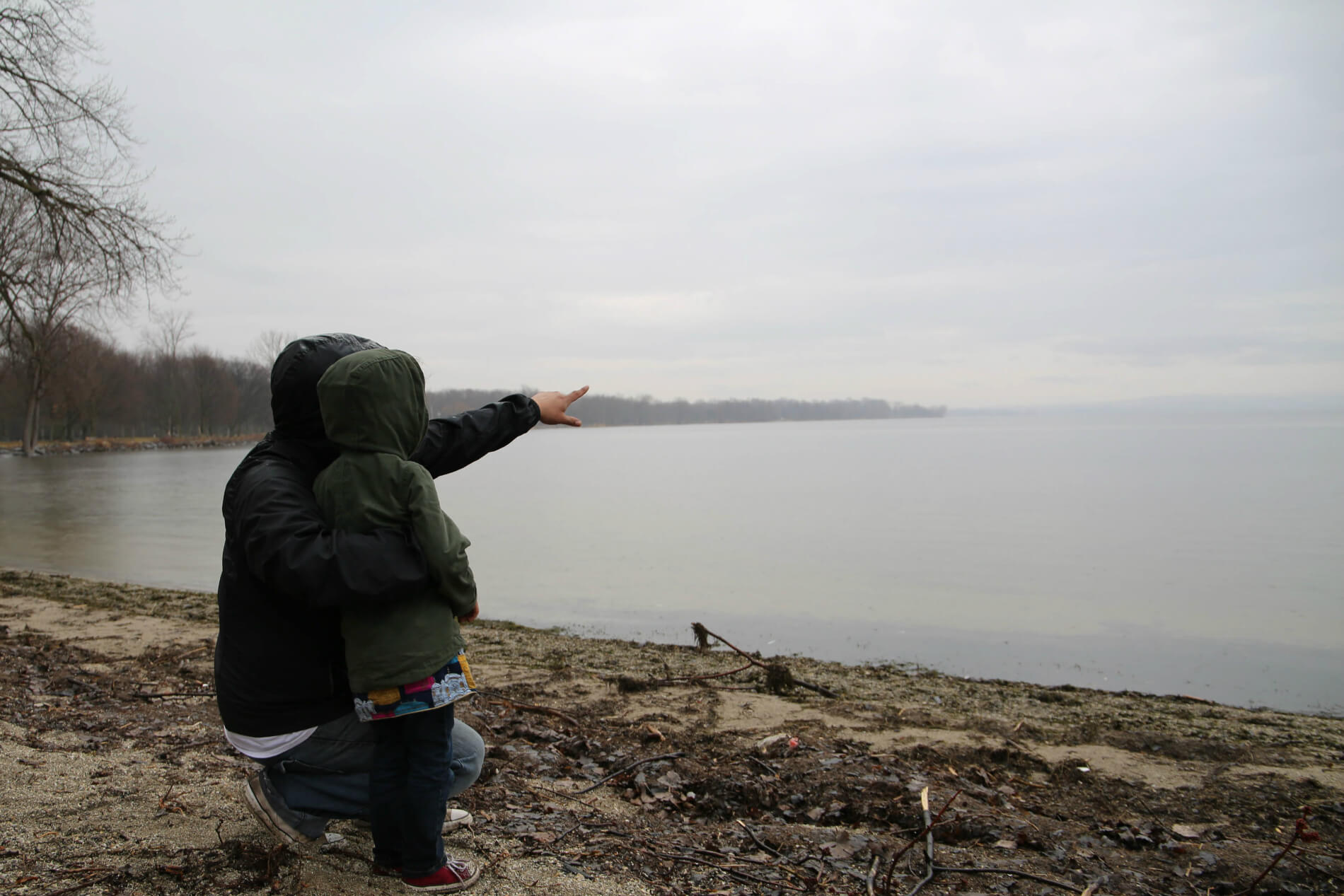 Hickory Edwards: "We are all connected like brothers through the water within us"
Hickory Edwards and his daughter. Photo: Natalie Brigham
Support our journalism. Become a Patron!

For the last decade, Hickory Edwards of the Onondaga Nation Turtle Clan has paddled around the Northeast Borderlands of Turtle Island (North America), an activity that connects him to these waters but constantly reminds him of the water quality and pollution issues plaguing Onondaga Lake and Onondaga Creek in Syracuse, New York.

After seeing similar problems surrounding rights to land and clean water in North and South Dakota, he was compelled to join the movement that began at Standing Rock. He has come into the spotlight lately, as one of his creations from the Standing Rock movement ended up in a display at the Smithsonian National Museum of the American Indian in Washington, D.C.

However, Edwards’ entrance into water activism began many years before Standing Rock—it began when he first went paddling. It is something he says his ancestors have done for thousands of years. He borrowed a kayak and began to paddle with friends: one mile the first day, then two miles the next, then four, continuing further and further until his friends decided to stay behind while he continued on. 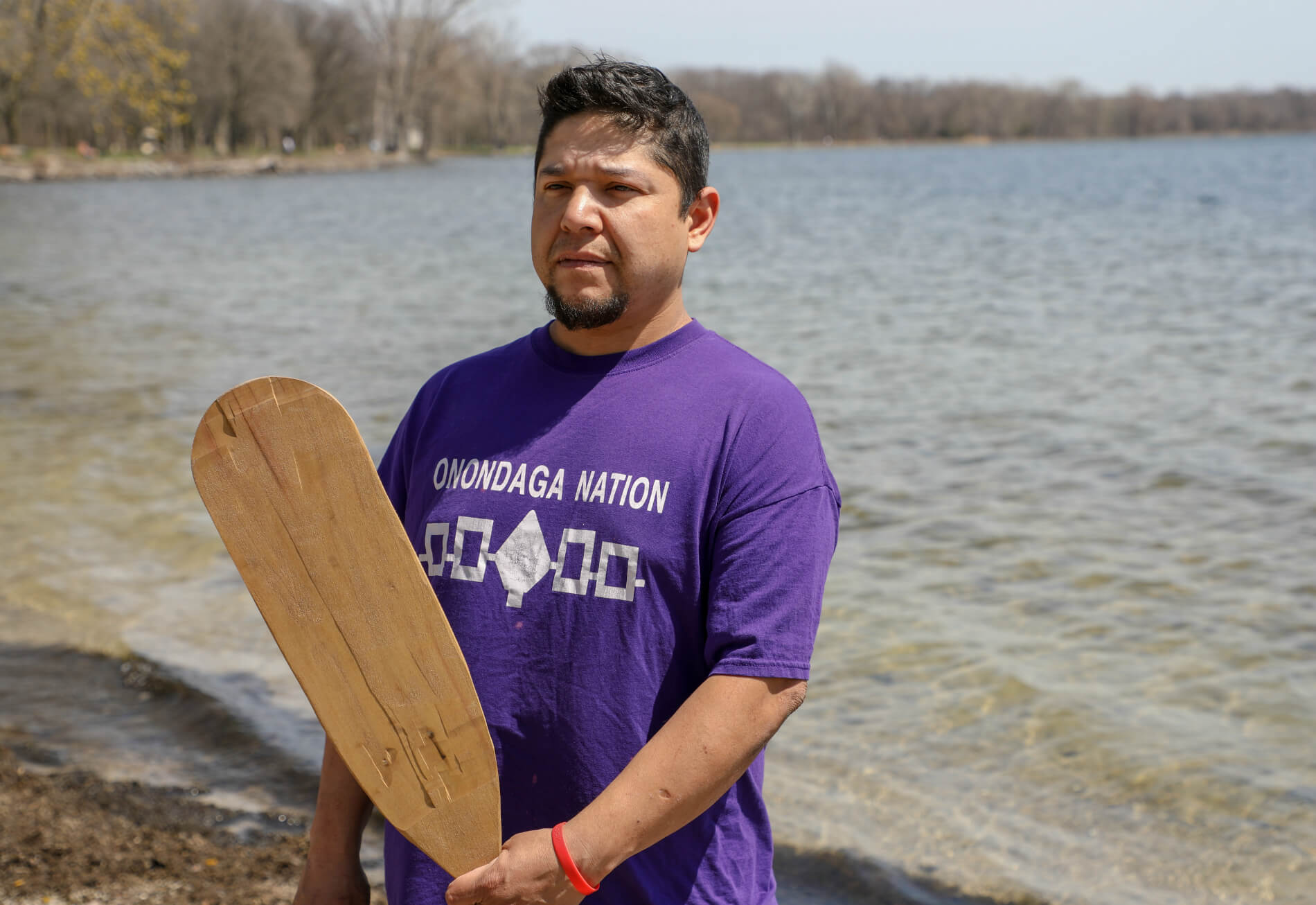 He first noticed the Onondaga Creek, muddied by mudboils dumping up to 20 tons of silt and sand into the creek each day and the city of Syracuse’s long history of brine mining. Eventually, as he started making the nearly 15-mile journey by kayak to Onondaga Lake from the Onondaga Nation, Edwards saw the water quality issues plaguing the lake firsthand. According to Edwards, the lake sacred to the Onondaga Nation has become something one wouldn’t even want to put one’s hands in.

According to the Onondaga Nation, “Centuries ago, the Peacemaker brought the Seneca, Cayuga, Onondaga, Oneida, and Mohawk Nations together on the shores of Onondaga Lake. At the lakeshore, these warring nations accepted the message of peace, laid down their arms, and formed the Haudenosaunee Confederacy – the first representative democracy in the West. The lake became a sacred place, one that must be cared for and respected.” 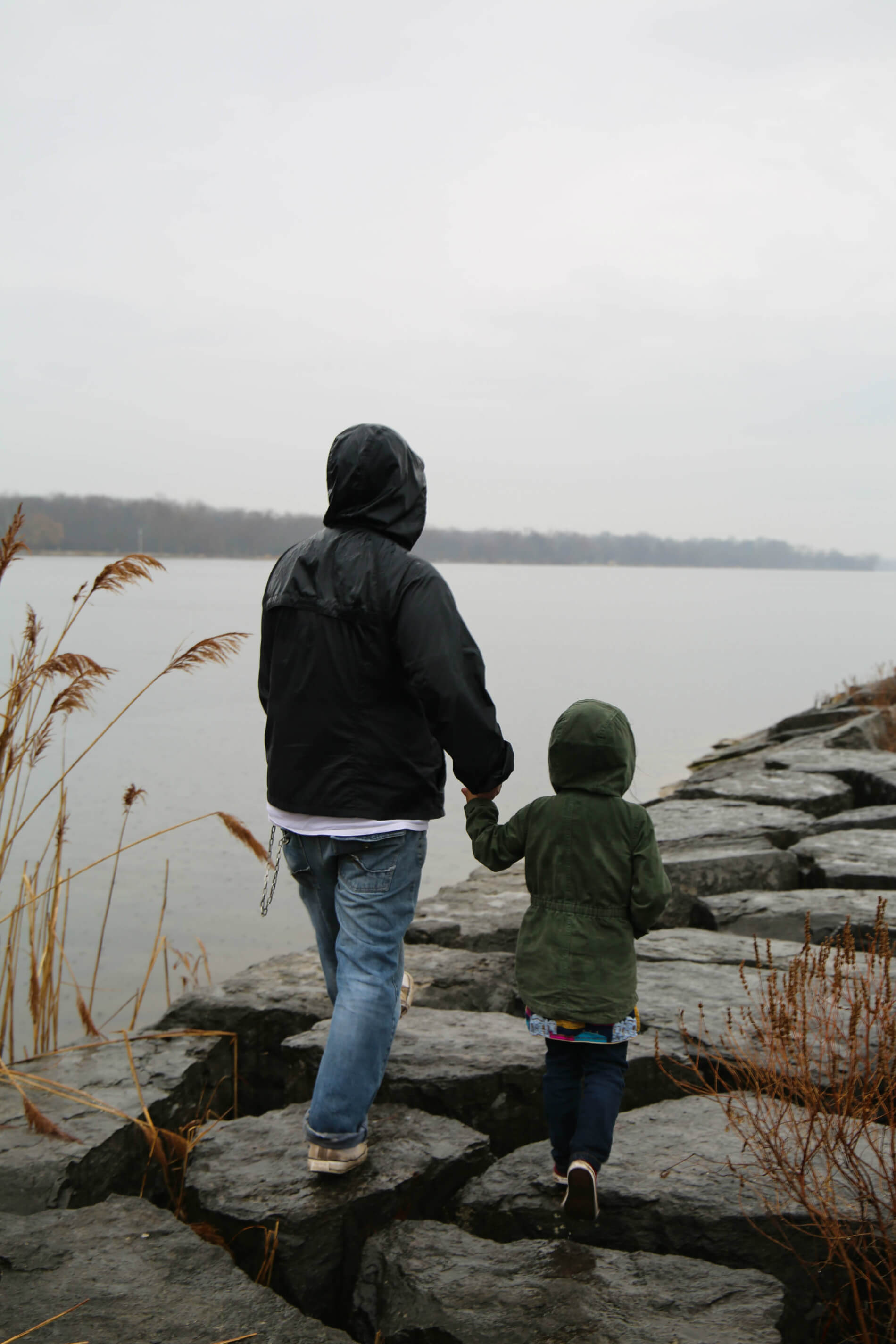 Since then, the sacred site has been labeled the most polluted lake in the U.S. by late Senator Daniel Patrick Moynihan after years of sewage and industrial dumping. Although the final stage of the lake cleanup process began in 2017, controversy remains over whether the lake will ever be considered fully restored.

“Seeing the lake like this started giving me the idea of what I could do to help,” Edwards says. “Anything to do with water, I’m fighting.” The water pollution near his home inspired Edwards to unite in the national fight for water, land, and treaty rights in the almost year-long movement at Standing Rock that earned the world’s attention. Edwards says that activism in defense of water is a large undertaking because “anywhere you go on this continent, there’s water being endangered of being polluted, misused, mismanaged, or mistreated.”

Edwards says Indigenous peoples are taught that throughout the whole circle of life, water remains the constant, necessary element.

Edwards says we are all connected like brothers through the water within us, which is why he wanted to go to Standing Rock and help in any way possible. 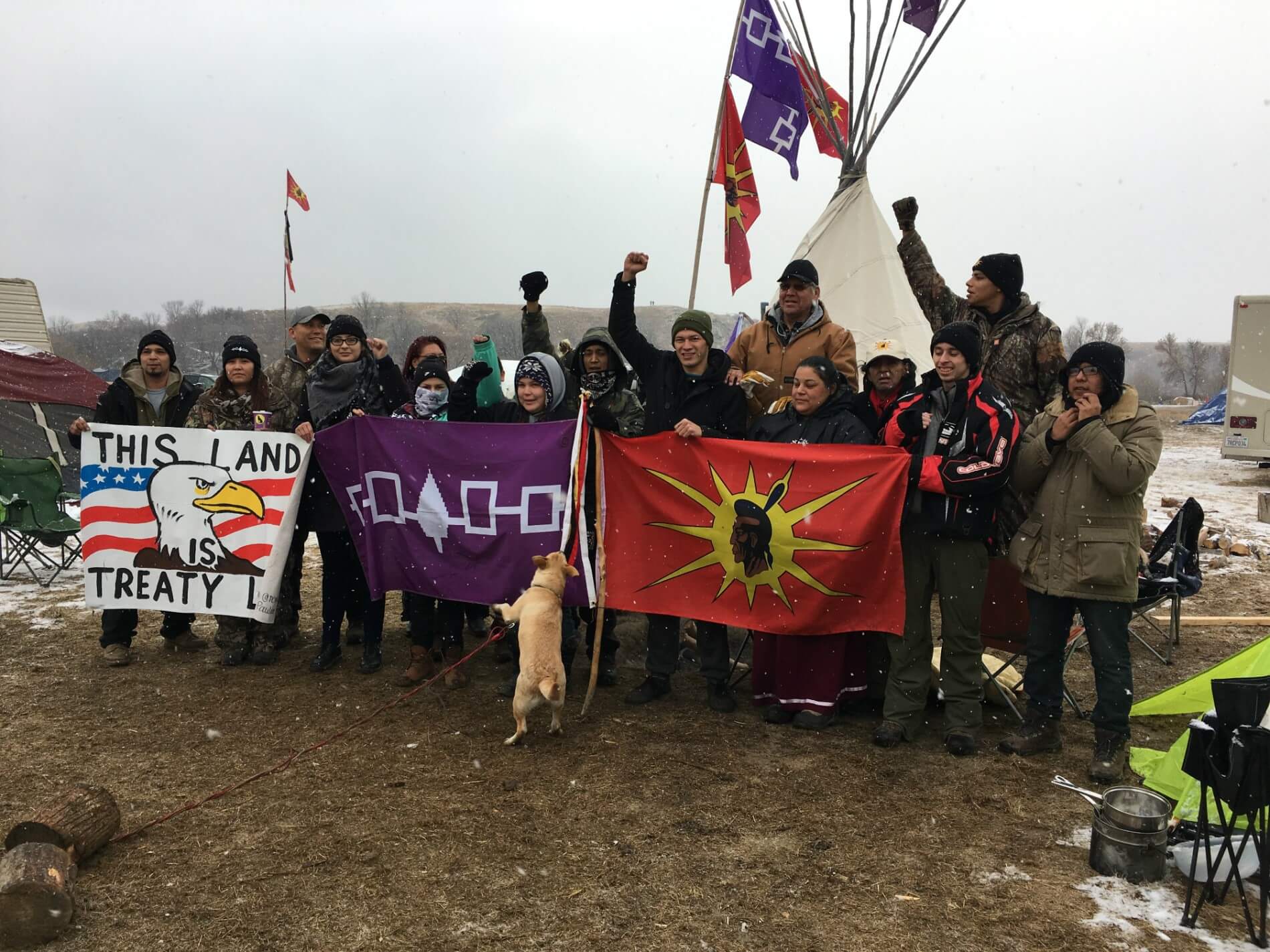 In total, Edwards took six trips out to Standing Rock, each for up to several weeks at a time. But, as a single father with a daughter in school, Edwards needed to limit his time in the prayer camp. On his numerous trips back and forth, he brought donated supplies to the camp as well as more people.

On September 22, during Edwards’ second visit, he made the iconic mile-marker pole right on the corner of the Haudenosaunee camp. The wooden pole was nailed with dozens of wooden boards, each pointing to the cardinal direction of a camp members’ home and stating the distance from Standing Rock. Edwards came up with the idea from signs he saw on various paddling trips around Syracuse.

“The first sign up was Onondaga, and then the rest of our camp and six nations,” Edwards says. “Then we just sat there with a hammer and nail. Anyone who passed by we said, ‘Hey where are you from? Put your home up there!’” Within the week, signs from all over the globe covered the pole — from just a couple hundred feet away to the Onondaga Nation’s 1,500-mile trip and all the way to the Artic Sami Indigenous peoples, 3,900 miles away.

Edwards returned on his third trip in November, after raising enough money to buy a 32-by-16 foot military-style tent for the Haudenosaunee camp. In order to test it, he set up the tent in Syracuse and would stay in it at night once it started getting cold. Once in Standing Rock, he slept outside until he could set the tent up, then slept there for another two weeks until the day before the Blackwater Bridge incident.

That day, Edwards was getting into the car with his niece, cousin, and her son. As Edwards and the others were jumping into the truck and saying their goodbyes, someone came by with a loudspeaker in the back of a truck yelling, “They’re hosing everybody down! They’re shooting everyone with rubber bullets,” urging people to the front lines of the barricade at Backwater Bridge.

“Me and my cousins, we looked at each other like, well we can’t leave,” Edwards says. “This is what we came here for. This is why we’re here, so we told the kids with us that we’d be back and left them with everyone in camp. And so we went up there right on that front line.”

Edwards was sprayed with fire hoses. He blocked rubber bullets with a shield. He watched as one of the police officers on the other side of the barricade shot his friend in the leg.

“My friend went down,” Edwards says. “I jumped in front of him with my shield and blocked a couple of bullets.”

Frozen from the water hoses that night, Edwards lost his voice for about two months. Among numerous other injuries, hundreds were diagnosed with hypothermia after being soaked by chemical-filled water cannons. Some had their corneas detached from being shot in the eye with rubber bullets, and a concussion grenade thrown by the police and security forces blew off one girl’s arm.

Even after that brutal night, Edwards wasn’t dissuaded from going back to Standing Rock. Less than a month later, Edwards returned with veterans who had come out for the publicized Veterans’ March at Standing Rock. Following this, Edwards wanted to save what he left in Standing Rock on one of his first trips there — the mile marker pole. Members of the Standing Rock camp had just received notice that the entire camp would be evicted by police and security forces. Edwards wanted the mile-marker pole to be saved as a symbol of the unification from around the globe. So he called the National Museum of the American Indian and explained that security forces would be there to demolish the camp in just days. Although museums’ portrayals of indigenous culture are controversial throughout indigenous rights movements, the National Museum of the American Indian has taken significant steps to have indigenous peoples leading and working with both branches of the museum, in New York City and in Washington, D.C. So, Edwards felt that it was the best way to present the piece in a respectful manner and would be seen by many to come.

He also explained that he lacked the money to get there in time to save the mile-marker pole. With just two days left before eviction, the museum decided to fund the costs of sending Edwards to save the pole. They wanted it be included as a featured piece in the end of the National Museum of the American Indian’s “Nation to Nation” exhibit, which featured items documenting broken treaties between the United States and American Indian Nations. “They had an emergency meeting and decided right there as fast as they could,” Edwards says. “So within ten minutes, they called me back and sent me the money to go out there. The next day, I was on my way, dug it up within the night, and made it back onto the airplane because the next morning was when they evicted everyone.”

Edwards says although Standing Rock was a momentous movement, the unity is not something that has surprised him.

“I have known that that is how we come together for each other and we do all these things,” but now “the world sees it too,” Edwards says. “We’ve always talked in between each nation, and we are aware of each other’s rights. I think the whole thing was the surprise to the non-native people, but it was definitely a nice surprise that a lot of non-native brothers and sisters came in on this fight with us.”

In terms of what the Syracuse community could do to be better allies to the Onondaga Nation and other surrounding nations, Edwards suggests finding groups in the area that are taking action and encouraging others to get involved. He said they are currently fighting the plan to dump fracking water directly into the Alleghany River.

Now, Edwards is preparing for a 13-day canoe journey, paddling across Haudenosaunee country from Seneca Lake to Cayuga Lake and then Mohawk River in early July. Edwards says the trip, 10 years in the making, intends to “bring our people back to the waters and back to the lands.” 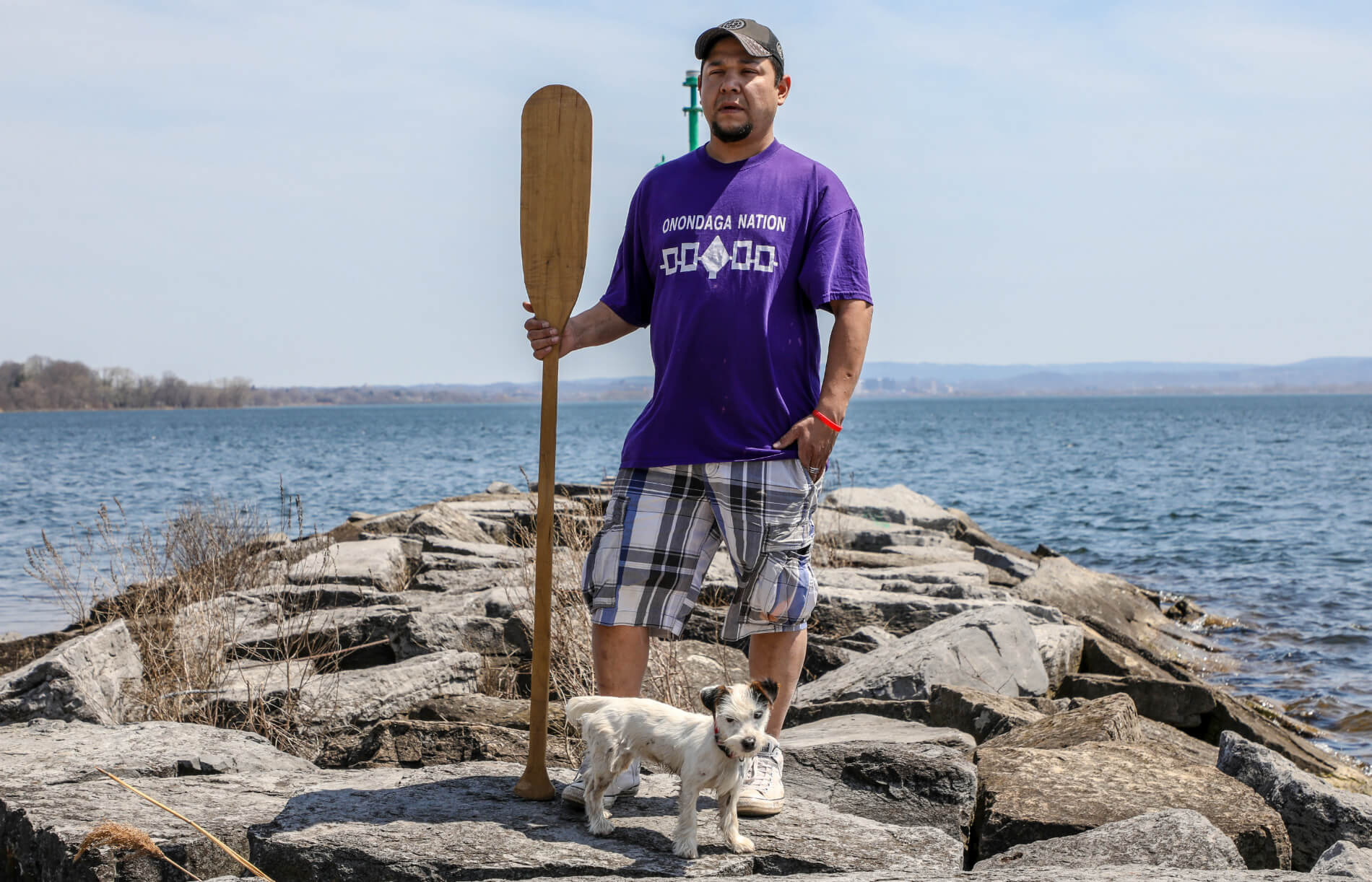 Garet Bleir is an investigative journalist working for Intercontinental Cry documenting human rights and environmental abuses surrounding uranium mining in the Grand Canyon region. To follow along with interviews and photos highlighting indigenous voices and to receive updates on his 12 part series for IC, follow him on Instagram or facebook.

This article was originally published in 360 Magazine. It has been re-published at IC with permission.