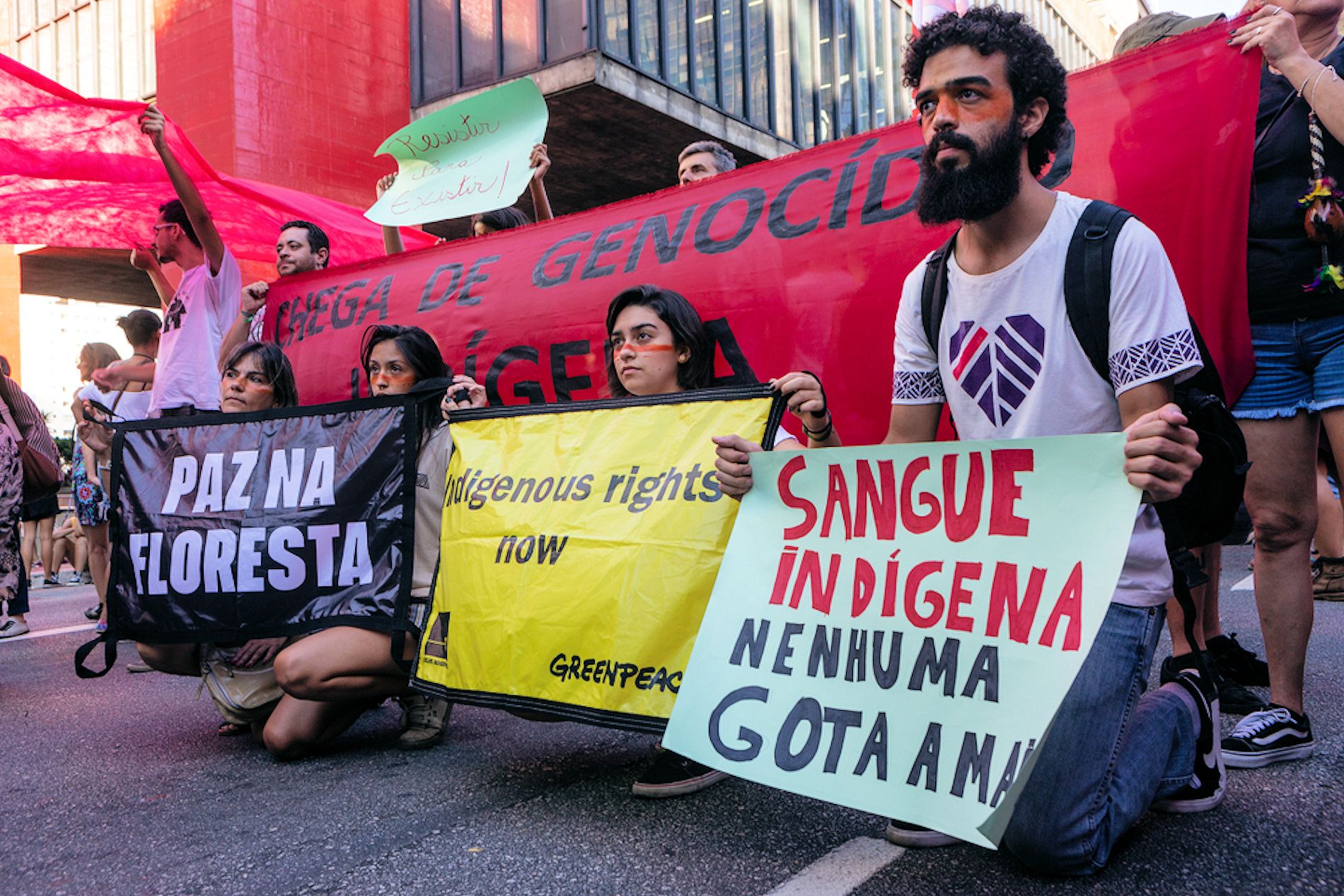 Environmentalists and activists with posters “peace in the forest and an end to indigenous genocide” in protest of the rights of indigenous people, in São Paulo, Brazil, January, 2019. PARALAXIS /Shutterstock
Support our journalism. Become a Patron!

Despite centuries of persecution, indigenous groups still manage or have tenure rights over at least a quarter of the world’s land surface. Often inhabiting these lands as far back as memory extends, they share a deep and unique connection to their environment.

Recently released figures show that indigenous groups are continuing to pay a heavy price for standing up for their ancestral lands. In 2018 alone, at least 164 indigenous people were killed defending the environment, adding to hundreds more deaths in preceding years.

They’re not the only ones – numerous lawyers, park rangers, and journalists have also been killed attempting to protect both resource and biodiversity-rich land from extractive industries. But indigenous groups account for the largest proportion of these killings, in a global battle that according to new research published in Nature is now more lethal than some war zones.

We must make sure that these deaths aren’t in vain. The same key UN report that declared a million animal and plant species as at risk of extinction also highlighted that nature under indigenous control is declining less rapidly than in other lands. It’s time for us to sit up and take note of how they safeguard biodiversity, and why they’re willing to put their lives on the line for nature.

Sharing a worldview that is centered on the land and their place within it, indigenous knowledge contains two central ideas that place nature front and center. The first is connectedness. Constantly observing the surrounding environment, indigenous peoples have an intimate understanding of the interconnected nature of all living beings and natural systems. Tied to the changing world, this understanding is thorough but pragmatic and local in scale, always open to be altered in the face of evidence.

The second idea is collectiveness. Knowledge is not considered to be owned by individuals, but held collectively by people as shared experiences that represent the sum of their wisdom. People are responsible for one another, nurturing values of cooperation, sharing and reciprocity.

Research on indigenous livelihood practices shows how these values preserve the integrity of nature. In Amazonia for example, centuries of attention to crop health, climate, and forest regeneration has led to the development of rotational farming practices, whereby diverse crops are grown within a small farming area and continually rotated across a larger natural landscape over successive harvest seasons.

Compared to modern intensive monoculture farming, this traditional method improves soil water and nutrient retention, reduces erosion and degradation, stores carbon more efficiently, increases crop biodiversity, and preserves forest habitats. The system provides a continuous flow of food through different seasons, where surpluses can still be sold, and its diversity makes it more resilient to environmental threats. The involvement of many in the success of the crops reinforces community cohesion, and a closer connection with the natural world.

At a larger scale, indigenous territories have been recognized as crucial for maintaining vital natural stores of carbon. For example, studies using satellite imagery from northern South America suggests that indigenous lands have lower incidence of deforestation rates as a result of less invasive methods of farming, fishing, hunting, and land management. These methods not only require much less open space, but also support healthy soil and animal populations, creating much more resilient ecosystems. 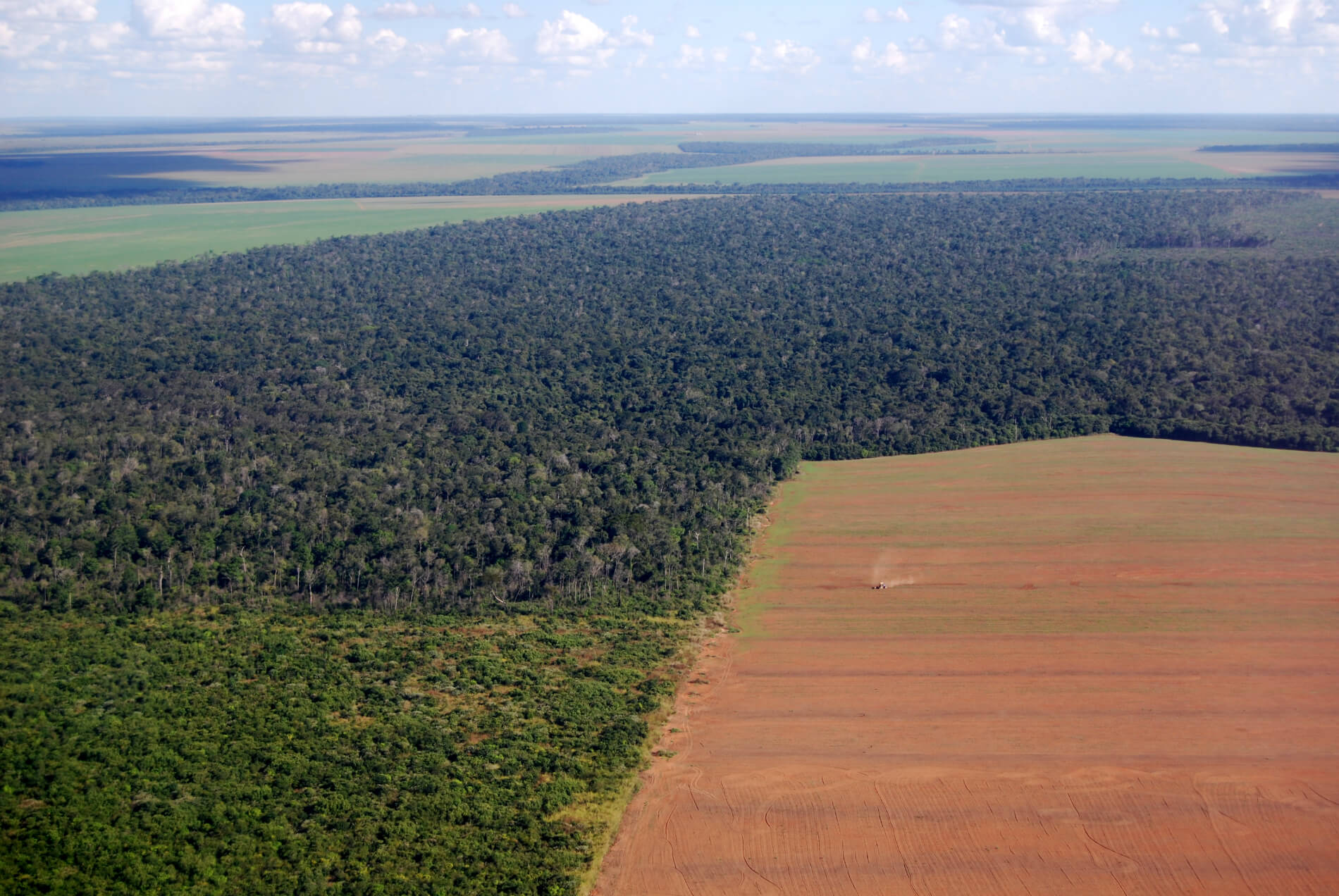 Monocultures of crops such as soy in the Amazon are causing deforestation and environmental degradation. Frontpage/Shutterstock

Indigenous fire management practices have also been shown to support biodiversity. By performing small-scale burning at different times during the year linked to cultural customs, the resulting mosaic landscape of burned and unburned patches makes it harder for large-scale, catastrophic wildfires to spread.

The above examples are just a few of many ways in which indigenous peoples live in greater harmony with the natural world. The UN is right to emphasise that global ecosystems would benefit from greater recognition for Indigenous knowledge and perspectives. But we must also heed the words of indigenous scholars such as Linda Tuhiwai Smith and Renee Pualani Louis, who warn us that only engaging with the academic “usefulness” of indigenous knowledge is a colonizing practice.

While indigenous people account for roughly 5% of the global population, they make up about 15% of the world’s extreme poor. Many do not have adequate access to basic services such as health and education. In recognizing the value of indigenous knowledge, we must also recognize that the legacy of colonialism has already eroded countless knowledge, values, and rights, and made indigenous peoples among the most marginalized on the planet. And the growing number of environmentally motivated murders of indigenous individuals shows that their access to justice is still severely lacking.

Research with indigenous people must not just draw from their knowledge, but prioritize their well-being and fundamental rights. This means acknowledging and respecting the distinctiveness of Indigenous worldviews and knowledge. It also means interacting in ways that build on Indigenous traditions of collaboration, reciprocity and oral communication.

For example, a Darwin Initiative project in Guyana is using participatory video to allow local indigenous communities to showcase their knowledge and concerns about the management of protected land through autonomous storytelling. This allows indigenous people to communicate and codify their values in their own words, but more importantly, strengthens their ability to build more equal, collaborative, and responsive exchanges with decision makers. In conjunction with the Guyanese government, the project is developing a unique evidence-based national action plan that aims both to implement and maintain Indigenous knowledge, and empower indigenous people.

Indigenous peoples should be a source of inspiration for the global community. The sooner decision makers represent their knowledge at the table, the better for biodiversity and the climate. Crucially though, we must not just value their practices, but their rights too.