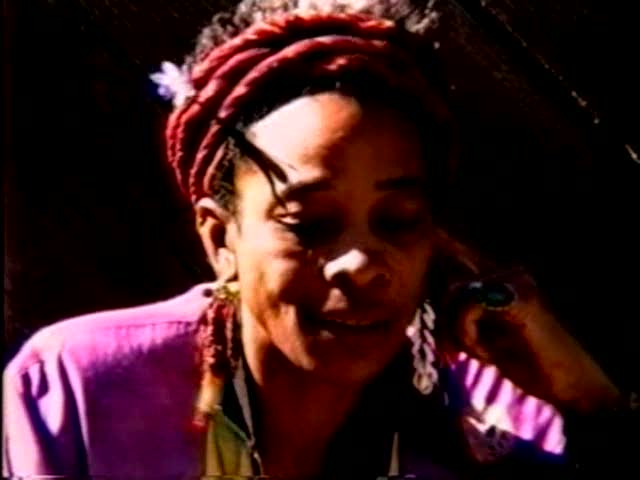 Set completely against dub influenced music, Dancing on John Wayne’s Head explores the connections between Blacks and Indigenous Peoples in the Americas. It was produced in 1997.

There’s been a lot of debate over the years about whether or not John Wayne–aka Marion Mitchell Morrison–the so-called “true American icon” was a racist. Alot of people have vigorously tried to defend him, claiming it’s “impossible” because of the odd character he played over the years, where “he defended the Indians” and “treated them like Equals.” One time, “he even had an Indian sidekick,” they argue; while others, claim he was “justified” because “he was a product of his time.”

Rational thinking people, on the other hand, need only look at what the man said in his life to know where he stood.

One time, for example, he asserted that slavery was natural, comparing it to a “kid who gets infantile paralysis and can’t play football like the rest of us.” It’s a claim as old as slavery itself, and one that continues to make its way around the Americas. Even now there are upwards of 40,000 Brazilians working and living as slaves.

Then there was the time he said, “When we came to America, there were a few thousands Indians over millions of miles, and I don’t feel we did wrong in taking this great country away from these people, taking their happy hunting grounds away.”

While not exactly racist, this comment shows just how ignorant he was. But even if he understood the history—that the colonists, settlers, and missionaries (the archetypes of colonialism) together committed genocide against millions of people—this “model American” would have probably stood by his guns. After all, according to him, “there were great numbers of people who needed new land” and “the Indians were selfishly trying to keep it for themselves.”

The film Dancing on John Wayne’s Head doesn’t really have anything to do with this obvious racism and ignorance, or the silly distractions people bring forward to defend it. It does, however, explore something he surely would have found objectionable: The connections between Blacks and Indigenous Peoples in the Americas.

Whether we’re talking about the Reggae-loving Havasupai (who are still struggling against uranium development on their land), the Black Indian Coca farmers in Bolivia; the Quilombolas of Brazil—or, the Olmecs, who carved statues in honor of their African visitors long before Columbus staggered on to this land—it’s a story for which there is little narrative.

There are many other stories the film had no time to explore. For instance, that Indigenous people were enslaved right alongside our African Brothers and sisters in America; and that some Tribes even practiced their own form of slavery, “owning” both Africans and members of other tribes. This bit of history is fairly well known today, though few have ever pointed out the far more common reality… that Indian Country was a safe haven for those who managed to escape the horrid slave-master relationship.

If you like this film, you may also want to check out the feature-length documentary American Red & Black: Stories of Afro-Native Identity; and the book Black Indians: A Hidden Heritage