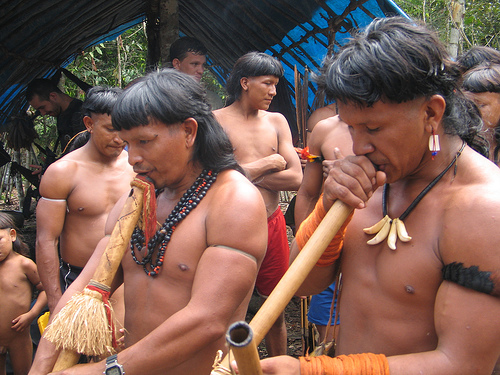 In Brazil, hydro dam workers have reportedly attacked a small group of Enawene Nawe who were fishing near a dam site last week.

“Enawene Nawe spokesman Daliamase said the workers made the four Indians, two adults and two children, lie on the ground. They then threatened them, beat them with sticks and forced guns into their mouths,” says Survival International.

“The workers only released the Indians much later when policemen put an end to the ordeal. The Enawene Nawe children were visibly frightened.”

“A representative from the company building the dam has denied that the workers had acted aggressively, and claimed that the Indians had attempted to enter the site without permission,” Survival adds.

This news comes just two months after 120 members of the Enawene Nawe occupied the construction site of another hydro dam, and then burned it to the ground.

“They came armed with axes and pieces of wood, banished the employees and later set fire to everything” said Frederico Muller, a coordinator working at the site. At least 12 trucks were destroyed, along with a number of offices and housing units. All told, Muller suggests that there was at least a million dollars in damages.

Shortly before the action the Enawene were participating in a “consultation process,” when they became aware of the full extent of the dam project and immediately withdrew.

In total, there are many as 77 dams proposed for construction along the Juruena River, which flows through the Enawene Nawe’s territory.

The Enawene have maintained opposition to the dams out of fear that they will have a devastating impact on the breeding cycle of the fish in the Juruena River, when they depend on for subsistence.

They also say the dams threaten their very survival, as the Enawene Nawe have explained many times in the past. According to their beliefs, if the fish and the river and the land is destroyed, “the yakairiti [ancestral spirits] will take vengeance and will kill all the Enawene Nawe.”

If you would like to support the Enawene Nawe, you can send a letter online that urges the demarcation of their land. For more news and background, visit Survival International’s page on the Enawene Nawe. Photo by Leo Wery