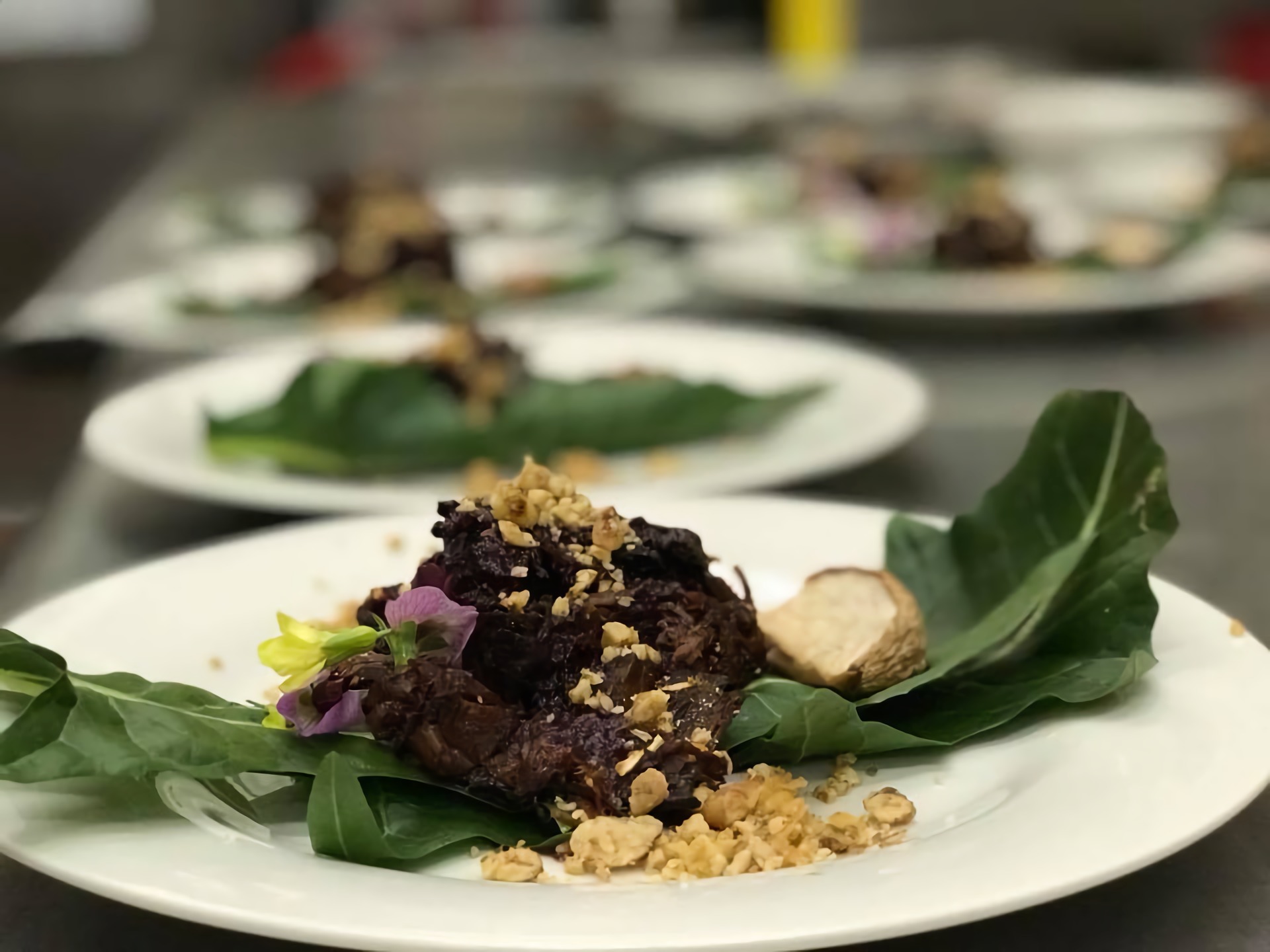 Preparing food—and letting others in our communities cook for us—is how we become good citizens who engage with the communities around us.
Photo: www.facebook.com/thesiouxchef/
Support our journalism. Become a Patron!

My arms hurt as I walked through Brooklyn on a cold December night. I was carrying a 10-pound, party-size tray of macaroni and cheese with three cheeses, cooked to just a touch beyond al dente, with a breadcrumb topping. I was headed to a community potluck and had spent the better part of that morning making (read: babying) a mornay sauce, cooking the pasta, and baking the mixture in the oven. As I walked the six blocks from the subway station to the venue where the meeting was being held, my arms started to shake. I started to wonder why I didn’t just pick up a bag of chips and a jar of dip and call it a day, but then I remembered the excited messages I received when I told my fellow event-goers that I would be bringing macaroni and cheese to our potluck. It was my way of making my friends and community members happy on a cold night and my way of providing comfort as we talked about the future of our community.

Why do we cook? First, we cook to sustain ourselves and our families. But in the current culture of food-as-art-form, we also cook to express ourselves. Cooking may seem like an act of self-preservation, an act that is both self-serving and necessary, but if you look beyond the immediate and beyond the narrow definition of what cooking is, you can see that cooking is and has always been an act of resistance.

Sometimes what we don’t cook says more than what we do cook. For chef Sean Sherman, fry bread is a dish that he will not make. In his cookbook, The Sioux Chef’s Indigenous Kitchen, he talks about fry bread, viewed as a sacrosanct part of indigenous cuisine, and explains why this seemingly simple dish is more than the sum of its parts. “I’m often asked why we don’t have fry bread on the menu or offer a recipe for fry bread in this book,” he writes. “It originated nearly 150 years ago when the U.S. government forced our ancestors from the homelands they farmed, foraged, and hunted, and the waters they fished.” For Sherman and for many indigenous communities, fry bread is an edible reminder of the injustices of colonialism and the loss of the ability to explore and develop indigenous cuisine using ingredients from the region. “They lost control of their food and were made to rely on government-issued commodities—canned meat, white flour, sugar, and lard—all lacking nutritive value,” Sherman explains. “Controlling food is a means of controlling power.”

Every time we step to our stoves to make a meal we’re engaging with the society around us. Each ingredient that we use, every technique, every spice tells a story about our access, our privilege, our heritage, and our culture. The foods and dishes we consume are all part of larger forces that impact our lives. Our appetites and what we crave are the result of our place in the world at that time.

Three cookbooks—Feed the Resistance, The Sioux Chef’s Indigenous Kitchen, and The Immigrant Cookbook—show how the act of cooking can be a platform for social justice and social action.

For Sherman, creating dishes using ingredients that were available to his ancestors is how he reclaims Native American foodways and supports the indigenous community. In his book, he explains how the work that he does now is about continuing to explore these foodways and create dishes using ingredients that are native to Minnesota. Instead of fry bread, Sherman creates corn cakes with braised bison or smoked duck because these ingredients represent indigenous cuisine and its reliance on the land and ingredients in a more holistic way.

“They taste of a time when we, as a people, were healthy and strong, and of the promise that we can stand up to the foods that have destroyed our health, the forces that have compromised our culture,” he writes. “And our corn cakes are easier to make and far tastier than any fry bread.”

Reclaiming a culture’s cuisine is a clear act of using food in a way to create social change. But home cooking can create change in smaller communities and ways. Feed the Resistance is technically a cookbook, but it’s also a collection of essays from chefs, writers, nonprofit founders, and others who are busy using their stoves in their resisting. Author Julia Turshen writes cookbooks and recently created Equity at the Table, a database for women and nonbinary people of color in the food world. She’s also an activist and intends for the book to be used as a way to support local activism. The recipes are divided into sections for activists who need to feed a crowd or bring portable snacks to a bake sale, or if someone just needs to make a quick meal for herself. They are accompanied by an introduction or essay by the creator of the recipe about what this specific dish means to them and what they are actively “resisting” when they make it. “Homemade food is an act of self-care that will serve you while you’re resisting,” Turshen writes above a simple recipe for roasted broccoli and quinoa with cashew dressing. “It’s important to take care of yourself so you can better take care of the world.”

Feed the Resistance can feel like a diary at times and offers readers a peek into the kitchens of people all over the United States who are actively working in the social justice space. In the essay “How Food Can Be a Platform for Activism,” Shakirah Simley, co-founder and organizer of Nourish/Resist in San Francisco, talks about using food to discuss police brutality with her brother and the function that food has when it comes to activism. “In my work, we seek to nourish so that we may resist,” she writes. In this way, it isn’t just the food that is important, but the act of eating together that creates a platform where activism can happen.

In activism, and in food, there’s also the question of who gets the mic and who gets to tell their story or share their ideas. In The Immigrant Cookbook the recipes are courtesy of chefs and writers from all over the world who have made America home. Well-known chefs like Daniel Boulud, José Andrés, and Nina Compton share recipes alongside chefs who are less known, but each one represents the story of a person or family coming to this country—and bringing their heritage and foodways with them.

Cultures and history come to the stove with us each time we cook, and every recipe in The Immigrant Cookbook is proof of that. Immigrants bring their food and recipes to this country and add to our shared American table. We may think of “American” food as apple pies and hot dogs and hamburgers, but these recipes, with their substitutions and roots in cuisines from other countries, are just as American. American food is a mixture of indigenous cuisine and food from other places adapted to incorporate American ingredients. Cooking these dishes is a way of embracing all of the “recipes that make America great,” as the book says.

When I think about cooking at my stove, or going grocery shopping, I often think about the feeling that I want to have when I sit down to eat. Am I trying to make something healthy so I feel good? Am I trying to comfort myself? Am I trying to make my partner feel loved? Food and cooking tap into what we want to feel, and that’s why they’re the perfect way to create change. Everyone puts down their guard over a good meal, and in that space, change is possible.

In her book Animal, Vegetable, Miracle, Barbara Kingsolver wrote that “cooking is good citizenship. It’s the only way to get serious about putting locally raised foods into your diet, which keeps farmlands healthy and grocery money in the neighborhood.” I would expand that to say that cooking—and letting others in our communities cook for us—is how we become good citizens who engage with the communities around us. That connection is how we create change. That’s why cooking is and will always be an act of resistance.

This article was originally published at Yes! Magazine. It has been re-published at IC under a Creative Commons License.