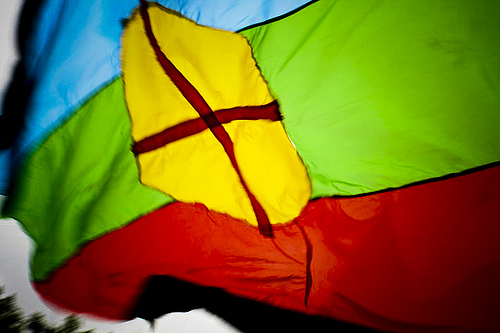 Continued aggressions of the Chilean state has led the Arauco Malleco Coordinator of Mapuche Communities in Conflict (CAM), a radical indigenous Mapuche organization, to formally renounce their Chilean citizenship and declared war on the government.

The declaration was issued on Oct. 20, the same day that two trucks belonging to the El Bosque forestry corporation were intercepted by CAM and set on fire in the province of Malleco.

As reported by the Latin American Herald Tribune, “the attacks, which began at 1:10 a.m., came hours after five Mapuches were formally indicted under a Pinochet-era anti-terrorism law for similar assaults carried out Oct. 11 near the city of Victoria.”

The declaration, much more than a symbolic gesture, comes at a time of increasing violence against Mapuche children and youths, particularly over the past three months, when Mapuche communities began reclaiming illegally occupied lands in the region of Araucania.

For instance, according to the International Federation of Human Rights (FIDH), on Oct. 16 “a large group of police, for as yet unknown reasons, began to fire pellets and tear gas canisters” in a school in Temucuicui, Araucania. “Several children suffered pellet wounds and had trouble breathing,” reports IPS News.

Hundreds of Mapuche and non-Mapuche activists protested the attack on Oct. 23—including several children, who carried the empty canisters with them as the marched in Temuco, Araucania’s capital.

Mapuche delegates also reached out to the United Nations Fund for Children (UNICEF) to “make a clarion call to the… government, civil society, churches, international institutions, world-renowned personalities and millions of volunteers who are responsible for protecting children’s rights.”

UNICEF responded on Oct. 26 by urging the protection of indigenous children and calling for a full and impartial investigation by the government. “What we have now is completely contradictory reports,” states Gary Stahl, the organization’s Chile representative. Nonetheless, “there is a different way to act depending on whether there are children present,” he adds.

IPS news reports on another serious case—“that of a 17-year-old Mapuche youth with a badly injured leg, who was wounded by about 100 pellets allegedly fired by Carabineros (officers) in the area where the land disputes are raging, on Oct. 20.”

“After being shot he was not seen for a week, nor did he contact health services. At his village he was given up for dead. However, he reappeared Monday and was taken to the Traumatology Hospital in Santiago, where the damage to his leg was being assessed, according to local press reports. He said that he had been rabbit hunting when he was shot, that he did not know who shot him, and that he had gone into hiding because he was afraid.”

In another case last week, a group of military police were caught on film beating a Mapuche youth who was trying to find some information about a member of his community who was arrested a week earlier. According to Aporrea, the beating “stopped only when other police shouted that the press was there and they were being recorded.”

When faced with the video, Eros Negron, the general chief of Araucania, said that the carabinero most active in the beating was fired.

At least nine other Mapuche youths were injured this month, including Felipe Marilan Morales, a ten year old boy who was shot in the forehead after the failed eviction of Mapuche from the estate of La Romana, one of dozens of privately-owned estates scattered on Mapuche lands.

Speaking on the reclamation, the Arauco Malleco Coordinator further demanded that the Chilean government cede the Mapuche’s historical territory, lands south of the Bio Bio River, in accordance with the 1825 Treaty of Tapihue.

Historically, the Bio Bio River marked the border separating the Mapuche from the region controlled by the Spanish. The territory did not become a part of the Chilean state until the late 1800’s following the “Pacification of Araucania.”

The territory has been steadily chipped away by multinational companies, farmers and land barons ever since.