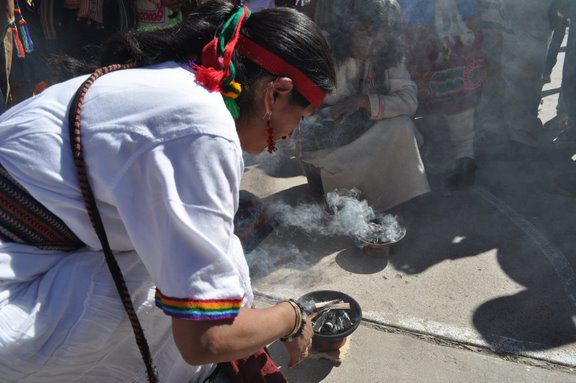 Below, a Press Release from Tonatierra discussing the IV Continental Indigenous Summit of Abya Yala, which began three days ago in Puno, amidst the ongoing Mobilization of Indigenous Peoples of Peru.

The Summit, which comes to a close on May 31st, has brought together more than seven thousand indigenous delegates from Continental Abya Yala (Americas) to share experiences, develop a proposal for “plural nationalities in the Americas” as mentioned on peruanista.blogspot.com, and, as Tonatierra explains, to “Unite the Indigenous Decolonization Movement” and give rise to a structure that will parallel the United Nations.

The importance of each effort goes without saying.

Puno, Peru- Gathered at the shore of Lake Titicaca, sacred site of the ancient Tiwanaku cultures of the Aymara and Quechua Nations, five thousand delegates of Indigenous Peoples from throughout the continent of Abya Yala [the Americas] today initiated the IV Continental Indigenous Summit Abya Yala with spiritual ceremonies and a march of continental solidarity.

Present from Abya Yala North, were delegations from Mexico, USA, and Canada who plan to meet during the summit to formalize a regional compact of communication, coordination, and commitments in order to address issues collectively and strategically as Indigenous Peoples of Abya YalaNorth.

Addressing the inaugural session of the IV Summit Abya Yala, Tupac Enrique Acosta of Izkalotlan Pueblo, also clarified the distinction of indigenous peoples in relation to the US-Mexico border, stating that “We did not cross the border, the border has tried to cross us,” and that “As indigenous peoples of Abya Yala, we are not immigrants in our own continent.”

In fact, the Human Rights issues of Indigenous Peoples related to international borders of the states of the Organization of American States – OAS is the theme of one of the working groups of the IV Abya Yala Summit,
and where Jose Matus of the Alianza Indigena Sin Fronteras of Tucson, Arizona will be sharing the experiences of border issues such as militarization, human rights violations and border crossing policies for Indigenous Peoples. As the US government is staging the implementation of the Western Hemisphere Travel Initiative for implementation, the IV Summit Abya Yala proposed to address the issue comprehensively at the continental level of national and hemispheric policy that would include for the first time the position of Indigenous Peoples rights of self determination.

A specific point of reference in all of the deliberations during the working group session is the adoption on September 13thof 2007 of the United Nations Declaration on the Rights of Indigenous Peoples, and its implementation across the continent of Abya Yala.

Also in attendance from Abya Yala North is Larson Bill of the Western Shoshone Nation who is to address the Abya Yala Summit on the issue of the impact of mining and extractive industries on indigenous territories and the demand of free, prior and informed consent for any form of development on indigenous lands.

Shannon Rivers, of the Akimel O’Otham Gila River Peoples also brings to the summit the process of education, engagement, and commitment that has been led in Arizona to establish the framework of Indigenous Peoples Day, and annual event that affirms the UN Declaration on the Rights of Indigenous Peoples (UNDRIP). One of the tasks of the Abya Yala North alliance (Canada-US-Mexico), is the endorsement of the UNDRIP by the three NAFTA governments as a prerequisite for any trade agreements whether already negotiated or to be negotiated.

In this same regard, Trade Agreements across the hemisphere are priority issues of immediate concern at the IV Abya Yala Summit. Presently in the Amazon region of Peru, indigenous peoples have declared insurgency and a military intervention in the Amazon region is in effect, as the Peruvian government attempts to usurp indigenous peoples territorial rights, and proprietary rights, by signing extraction contracts with multination petroleum interests and other extractive industries. The IV Indigenous Summit Abya Yala has taken a strong stand of solidarity with the indigenous peoples of the Peruvian Amazon, acting upon the message brought to the inaugural assembly by one of the representatives from that region.

The same scenario in terms of trade agreements is taking place in Colombia, Ecuador, and through the continent in different degrees of assault and collusion with government officials to the point that the statement has been made that: “These aren’t governments, they’re accomplices.”

In contrast, President Evo Morales of Plurinational State of Bolivia sent a message of greetings and solidarity to the IV Indigenous Summit Abya Yala, saying:

“We should not forget that for the liberation of our peoples, we must recognize that the land does not belong to us; instead we belong to the land.”

Speaking from the unique position of a president of a recognized republic, a member state of both the OAS and the United Nations, the statement read in its entirety to the opening assembly of the summit also framed one of the boldest, and ambitious goals of the movement given expression by the IV Summit Abya Yala. In his opening remarks at the inaugural ceremony, Miguel Palacin of the Coordinating body of Indigenous Organization stated that the path of the Indigenous Peoples of Abya Yala was to join in confederation with all other indigenous peoples of the planet with the purpose of constructing an alternative parallel structure of global governance to the UN system. The activities of the IV Summit Abya Yala for the next two days are intended to allow for discussion and dialogue on the challenges of such a global initiative: the plan to save Mother Earth.