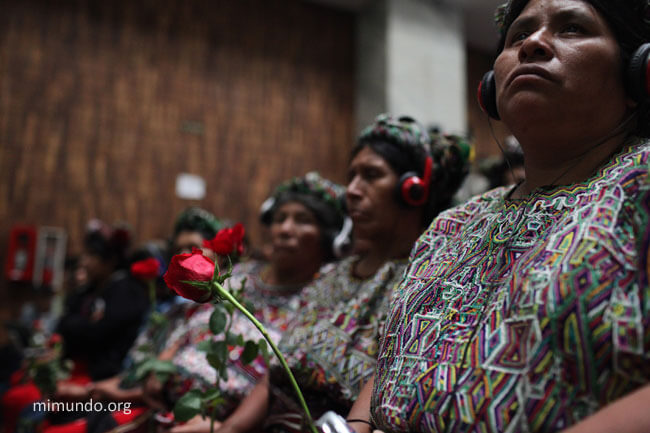 On May 10, 2013, Guatemalan ex-dictator Jose Efraín Rios Montt was sentenced to 80 years in prison for genocide and crimes against humanity in an historic case. This victory occurred after an unwarranted suspension of the trial and many other delay tactics utilized by Montt’s representation. The ruling came as an immense victory for Indigenous peoples of Guatemala, who had yet to see any justice for the rapes and murders of family members, the massacres, and the destruction of their homes and their lands that occurred during the 36 year armed conflict in Guatemala. For many, the ruling against Montt was a sign that injustice against Indigenous communities would no longer be tolerated, and that justice, even against the highest powers, could be sought.

Then, just ten days after the historic conviction of ex-dictator José Efraín Ríos Montt, on Monday, May 20, 2013, the Constitutional Court of Guatemala threw out the ruling on a technicality. The trial was then postponed and was to take place under a new tribunal. It soon became clear that the case was not going to trial again any time soon. Since the throwing out of this trial, the progress that was made towards justice was being slowly erased.

[On] May 13, 2014, 111 members of congress voted on whether or not genocide occurred here in Guatemala. 87 of those congress members voted that genocide did not occur in Guatemala. This deplorable decision is another step towards relieving Rios Montt, and thus current President of Guatemala, Otto Pérez Molina, of all responsibilities for his crimes against humanity. There is no time limit on the penal responsibility regarding crimes of genocide. If the crimes are not considered to be crimes of genocide, then those accused can no longer be considered legally responsible for crimes committed some 30 years ago.

Amilcar Pop, an Indigenous congressman, who is one of few congressmen defending the rights of Indigenous people in Guatemala, refers to the ruling as “a vote of betrayal to human rights”. According to Pop, the vote strengthens the already existing impunity and human rights violations in Guatemala.

The president of Congress, Arístides Crespo, stated, “What we as a Congress are saying is let’s forget the past and start working to search for harmony, peace and reconciliation”. His statement on forgetting the past and moving on was one that was declared by multiple congressmen. This statement ignores the fact that without justice, one cannot move towards reconciliation and peace. Our team at Cultural Survival is saddened, but not surprised by this terrible news. Yes, there was genocide in Guatemala, and until that fact is recognized and accepted, the Indigenous people will not receive the justice they deserve.