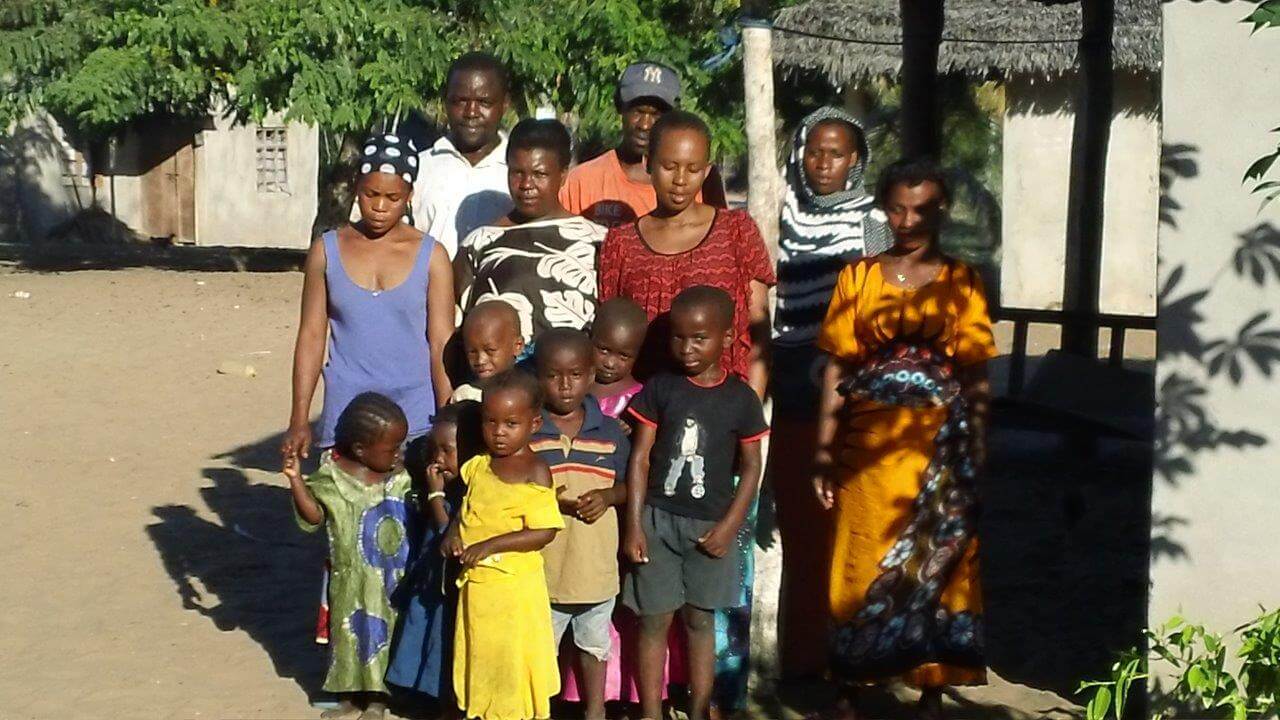 Members of the Uvinje community, considered illegal inhabitants in their own ancestral lands by TANAPA. Photo: A Orozco-Quintero, Taken Feb 2014.
Support our journalism. Become a Patron!

ICCA Consortium
In the following letter, originally dated January 11, 2016, the ICCA consortium asks the new president of Tanzania, Dr. John Pombe Magufuli, for a positive resolution to the situation that continues to face Uvinje villagers in Saadani Village, Pwani, northeast Tanzania. We republish it here for posterity. /IC

May we, the ICCA Consortium, an international organisation based in Switzerland, offer our warm congratulations on your election by the people of the United Republic of Tanzania. We take great pleasure in noting the immediate and well-received impact that your Presidency has achieved to date.

The ICCA Consortium is an international association registered under Swiss law uniting organisations and federations of indigenous peoples and local communities and their supporting NGOs concerned with the appropriate recognition of the territories and areas conserved by indigenous peoples and local communities (ICCAs) throughout the world. We are a partner organisation of the Secretariat of the Convention on Biological Diversity (CBD), the United Nations Development Programme (UNDP GEF SGP) and the International Union for the Conservation of Nature (IUCN). Our Members and Honorary Members span over seventy countries.

The ICCA Consortium’s worldwide engagement is part of the global recognition of the importance of community conservation practices, including by those who define themselves as indigenous peoples and those who do not, to achieve global conservation goals and targets. This recognition is enshrined in the Convention on Biological Diversity (CBD), which recommends Parties to “recognize the role of indigenous and local community conserved areas in biodiversity conservation and diversification of governance types” (CBD COP 10, Decision X 31), a role considered fundamental to reach Aichi Biodiversity Targets 11 and 18, among others.

We would like to draw your attention to a matter which has for some time troubled the international conservation and land rights community as well as your own Tanzanian affected citizens. These are the coastal communities surrounding Saadani National Park, Bagamoyo District. Concerns particularly focus on the most profoundly affected community of Uvinje, a sub-village of Saadani village.

This matter concerns persistent attempts to evict the Uvinje community on what we conclude are spurious and possibly illegal grounds. This attempted eviction is also unnecessary due to Tanzania’s innovative conservation strategies. Once you have scrutinised the facts, we have one request that we hope you will find fit to pursue: to direct your agencies to resolve the matter in a fair and practical manner that puts the interests of ordinary and poor citizens first, however few they may be. Given the controversial role of Government institutions in this matter, and particularly of the Tanzania National Parks Authority (TANAPA), we would further urge that any delegation you send to investigate the case is independently led and advised.

The issue on which we seek your attention is not a new matter. It has origins in the redrawing of village boundaries more than ten years ago to create the Saadani National Park. This process incorporated significant village lands. There are procedures for this to occur when it is deemed to be in the public interest. In this particular instance, incorporation was effected through covertly redrawing a critical boundary of the Saadani Game Reserve, whilst claiming this had not taken place. This had a resulting detrimental effect on the local population.

As background: in the 1960s, Saadani village, including its sub-village Uvinje, invited the Department of Wildlife to help them conserve the wildlife being indiscriminately killed on their village lands by outsiders. A partnership evolved and Saadani Game Reserve was officially established in 1974 with the full support of Saadani village; the village gave 50% of its territory for the Reserve. In the 1970s, this seemed a logical measure. Today, globally and in Tanzania, we know that more modern approaches can be adopted to help communities themselves create protected and conserved areas.

In the late 1990s TANAPA arrived to ‘upgrade’ the Reserve into a National Park and a process of consultation ensued. The National Park was to be larger than the Reserve and additional land was added from Saadani and other villages to the north, west and south sides of the Reserve. However, never in the course of these consultations was there any agreement to annex land from the eastern side of the Reserve; this comprises the coastal strip of Saadani village settlements, among them Uvinje. Furthermore, Bagamoyo District authorities secured a written commitment from TANAPA to return to the village an area of 1.5 square kilometres on this boundary to add to the very narrow strip of land that had been left for the Saadani village centre. Not only was this commitment never honoured, but also, the eastern boundary was almost entirely redrawn. The Park was said to include the totality of Uvinje and Porokanya, Saadani’s two main coastal sub-villages, as well as part of the Saadani village centre. Unfortunately, district and other authorities gave their approval for the National Park unaware that the original boundaries of the Reserve at Saadani village had been altered and some of its population dispossessed.

TANAPA has since argued that the Park boundary in the east simply followed the boundary of the original Reserve. Retrieval and analysis of the original gazettement and of a map provided by the Department of Wildlife shows that this assertion by TANAPA is entirely incorrect, and therefore legally untenable: the relevant area never formed part of the Reserve. While many of those affected by the gazettement of Saadani National Park (2005) have eventually accepted the compensation offered by TANAPA to resolve the complaints, Uvinje villagers who would lose their lands entirely, have stood firm against this.

The Uvinje community’s reasons for standing firm are not only due to the loss of traditional livelihoods that any relocation or eviction will cause. This is an old coastal community, deeply concerned at the prospect of social fragmentation and the loss of its heritage. No compensation mechanism could make up for the losses that are contemplated. The community considers the threatened loss of their lands to be both unnecessary and an insult to them as law-abiding and helpful citizens. Such loss would also be a profoundly inappropriate response to the community’s own initiative to engage with Government in 1965 to protect their wildlife and communal lands from poaching. Uvinje villagers were key actors in this early conservation effort, and they remain committed to the same goals.

For its part, the Department of Wildlife at the time took care to exclude inhabited coastal areas in order to minimise interference with fishing and coconut palm livelihoods. The area was mapped and boundary beacons were installed, this was duly recorded at the time of gazettement. Both were ignored by TANAPA in the process of converting the Reserve to a Park. Since its gazettement (2005), TANAPA has deemed the Uvinje villagers to be unlawful squatters, and has made repeated attempts to persuade or force them to leave their small homeland.

The ICCA Consortium has consulted widely on this matter with experts, including with a geographer who carried out research in this area, among other sites, and who collated the mapping information provided in the annexes. Enormous claims are made upon our time as a global organisation, and we do not give our support to issues lightly. In this instance, we find the cause just, and also pertinent to growing concerns as to how state bodies operate in the name of conservation. Our own legal reviews also conclude that there are means in Tanzanian legislation through which village land rights can be respected and conservation can be achieved. We submitted letters on this matter to President Jakaya Kikwete, first in August 2014, then again in February 2015 and May 2015. No resolve or response has been forthcoming. It is understood that at least one investigation team was formed but at no time did it reach the Uvinje community.

We have compiled a complete dossier detailing this issue in the documents attached to this letter. Appendix 1 provides a chronology of events since 1965. Annexes to this appendix are also attached providing additional information and documentary evidence.

There are several points that should be highlighted: –

Your Excellency, we thank you for your attention and look forward to this matter being justly resolved once and for all.