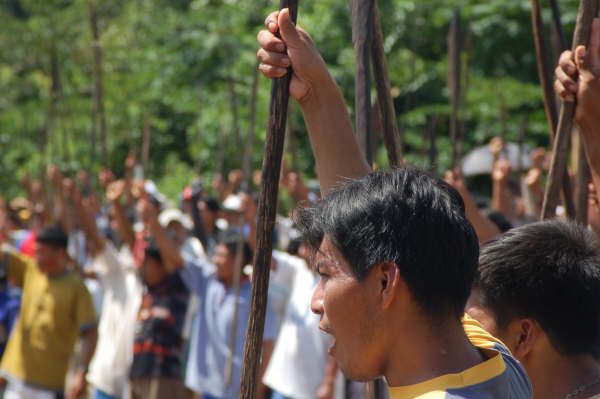 Peru’s Ministry of Energy and Mines announced this week that it is “indefinitely suspending” Minera Afrodita’s exploration activities in the Cordillera del Condor region of Peru.

As reported by Servindi, the announcement follows a recommendation by the Supervisory Agency for Investment in Energy and Mining (OSINERGIN), which recently that found that Afrodita, a subsidiary of the Vancouver-based company Dorato Resources Inc., has no concession rights in the Cordillera del Condor region, which straddles the border between Peru and Ecuador.

The Interethnic Development Association of the Peruvian Rainforest (AIDESEP) has welcomed the Ministry’s announcement, however, AIDESEP says it is still a far stretch from the “permanent removal” that the Ajwun and Wampis Peoples have been calling for.

They say Dorato has never consulted them or obtained their prior and informed consent. In August 2009, they issued an eviction notice to the company.

As well, more than 50 communities have singled out Dorato, because, they say, the company is actively contaminating the Cenepa and Maranon rivers with mercury and cyanide waste. As many as 13 thousand indigenous people in Peru and Ecuador depend on these two rivers.

AIDESEP also points out that, while the suspension blocks the company’s operations in the Cordillera del Condor, they will still be able to operate in the surrounding region.

Further, it is unclear how long the suspension will actually last for, given the timing of the decision. It was issued just four days before Indigenous Peoples in northern and eastern Peru—along with several social organizations, unions, and advocacy groups—are scheduled to mobilize for a “day of peaceful struggle.”

According to the chair of Peru’s Council of Ministers, the suspension “has a lot to do with the mobilization” which, he says, “some indigenous communities in the Cordillera del Condor were preparing in order to show their disapproval of this company’s operations.”

The Chair’s statement unfortunately downplays the reasons for the effort. According to AIDESEP, it is not simply to show disapproval of one mining company. Rather, it is being held: to demand an end to the persecution of indigenous leaders; to reject the main points of the Commission report surrounding the tragic events of Bagua; to condemn the constant discrimination of Indigenous Peoples by the highest levels of government; to encourage respect for the laws of indigenous communities, including ILO Convention 169; and, among many other points, to call for an end to all mining and oil concessions in the Cordillera del Condor.

The mobilization will start two days from now, on February 22, 2010.