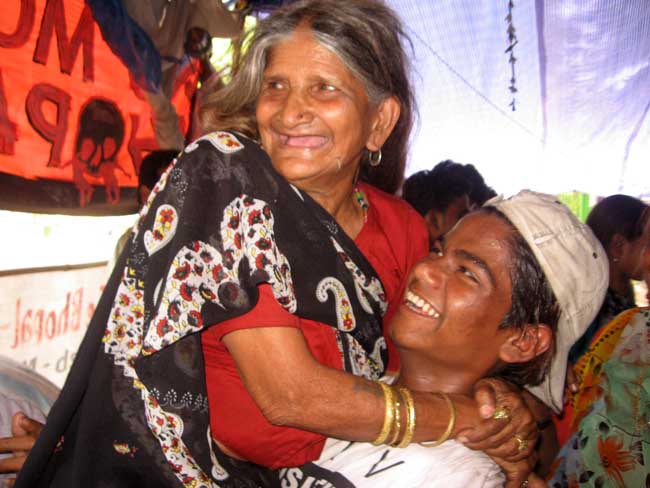 After protesting for a solid three months, victims of the 1984 Bhopal chemical disaster have gained some important victories. On May 29th, the Prime Minister of India agreed to some of their key demands: that a commission would be established to carry out their medical, social, economic, and environmental rehabilitation; and that by the end of this year Bhopali’s will have safe water (it is still contaminated from the massive chemical spill which occurred 23 years ago).

“It was a day won by sheer single-minded, undaunted, persistence;” says the International Campaign for Justice in Bhopal, who’s currently blogging the protest. “A day that was the motivation for every painful step over 38 gruelling days; a day that has sustained the tedium, discomfort, personal risk and self sacrifice borne over 62 days of roadside life; a day that vindicated the Bhopalis faith in their own unflagging strength: the day the Prime Minister of India could no longer ignore the tide of approbation heaped upon him these last 100 days.”

Among numerous actions and statements that have come forward, activist and writer Arundhait Roy recently said,

The lessons of Bhopal do not lie in our past but in our future. By refusing to meet the people of Bhopal who have suffered for decades after the Union Carbide/Dow Chemicals gas leak Prime Minister Manmohan Singh, who is at the forefront of the Corporatization of India’s Economic Policies, is sending out a clear message to the Corporate World: In India you are free to poison, rob and kill our people. The Government will protect you. You will never be brought to book.

It would seem the Prime Minister wants to prove this wrong… though that sure wasn’t the case on May 21st, when 20 of the protesters were arrested for chaining themselves outside the PM’s home. Fortunately they were only detained for one day.

The Protest will continue

Following the Prime Minister’s announcement, three organizations of the survivors wrote a letter applauding his decision, though vowing to continue protesting until all of their demands are met. The letter reads in part,

On behalf of the survivors of the Union Carbide disaster in Bhopal and those poisoned by contaminated ground water, we thank you for your positive response in meeting some of our demands for rehabilitation and justice.

We are happy to know that the government headed by you: agrees “in principle” to set up a Commission on Bhopal, will ensure supply of safe water to contaminated communities before the end of the year, has directed Indian Council of Medical Research to resume medical research in Bhopal and will pursue the application in the MP High Court seeking Rs. 100 Crores from Dow Chemical as advance for clean up of toxic waste and contaminated ground water.

The remaining demands – relating to extradition of Warren Anderson and Union Carbide, deregistering the pesticides Dursban, Nurelle and Pride, and revoking the license granted to Reliance to import Union Carbide’s Unipol technology – are all legally mandated. By asking you to meet them, we’re merely demanding that the Government assist the law in taking its course.

[…] we will continue with our protest *dharna* till we receive your government’s response to the specific demands for appropriate legal action against the two criminal corporations: Union Carbide and Dow Chemical.

Criminal indeed. The 27 tons of methyl isocyanate and other deadly gases that turned Bhopal into a gas chamber, did so because “none of the six safety systems at the plant were functional, and Union Carbide’s own documents prove the company designed the plant with “unproven” and “untested” technology, and cut corners on safety and maintenance in order to save money,” notes the Students for Bhopal website.

This negligence resulted in the tortuous death of at least 20,000 innocent people – with at minimum, another 150,000 becoming severely disabled.