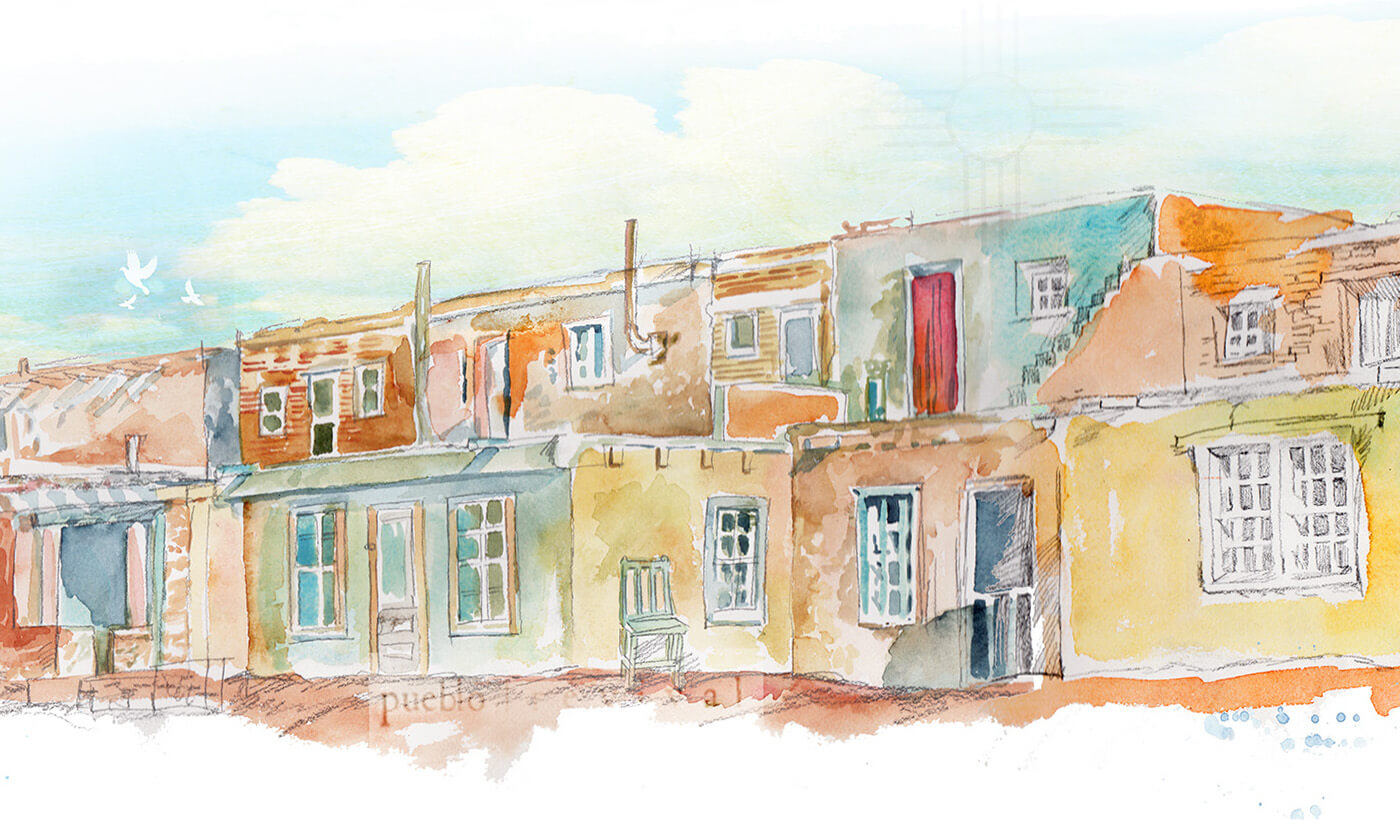 Imagine a community where every home maintains a comfortable temperature without the use of electricity. Designed with local materials and aligned to maximize use of solar energy, these homes are more than just a place to live: They are also perfectly suited for processing food, participating in religious gatherings, and maintaining social relationships. These houses are also incredibly durable to the test of time—so durable, in fact, that they’ve survived thousands of years.

The Sky City village in the Pueblo of Acoma epitomizes intelligent architectural design exactly as described. About 60 miles west of Albuquerque, New Mexico, this community has thrived in its Southwestern desert atop a mesa for what tribal elders estimate to be over 2,000 years.

These days, not everyone lives in Sky City. After centuries of oppression and violence from Spanish and American colonial governments, the Pueblo of Acoma retains only about 10 percent of its original land base. And the federal government maintains a significant stake in the Pueblo of Acoma’s tribal housing programs.

Today, indigenous communities are impacted by U.S. housing practices. In the case of the Pueblo of Acoma, for example, the primary source of funding for the tribe’s housing authority is through a grant program that funds tribal housing projects—so long as they meet standards set by Housing and Urban Development. These standards force projects to conform to Western design principles. As a result, tribal members live in Western-style project homes—homes that don’t incorporate cultural needs, aren’t energy efficient, and undercut community self-sufficiency.

In my work as a master’s candidate of American Indian studies at Arizona State University, I’ve studied the impact of housing policy on traditional housing, energy resilience, and culture in indigenous communities in Arizona. This work brought me in contact with Wanda Dalla Costa, an architect who is leading efforts to revitalize traditional architecture in Arizona.

Dalla Costa is a Saddle Creek Cree and visiting professor at ASU. She views housing as not only an expression of tribal sovereignty, but also as a pathway to nation-building.

Currently, Dalla Costa collaborates with the Gila River Indian Community, south of Phoenix, on what she calls “re-operationalizing their traditional homes” in a modern context. As part of this project, students from ASU partner with tribal members to learn about traditional building techniques and the role that architectural design plays in supporting and maintaining cultural values.

One outcome of this partnership is to provide the community with recommendations for architecture that integrates traditional design principles into modern structures. Dalla Costa’s team has gathered information on the role traditional structures played in the daily life and culture of the tribe’s O’otham ancestors. In this process, students have listened to community members tell stories of the important role these structures play in social gatherings.

By gathering this information, Dalla Costa and her team will establish cultural priorities that should appear in the design of modern homes. Currently, Dalla Costa is fundraising to build a housing prototype in 2019 and plans to start co-designing with tribal members soon.

Research shows that architecture that reflects local traditions and heritage provides social and cultural benefits. According to award-winning East Indian architect Balkrishna Doshi in an interview for Reuters, architecture that uses interlocking spaces, colors, and designs rooted in local traditions provides residents—especially those in vulnerable communities—with security, and can lead to social change. Yet, in an interview by Dezeen, Doshi notes that India’s desire to compete globally has led it to construct characterless skyscrapers. This kind of growth reflects a “desire to be like somebody else” rather than a desire to reflect local heritage, he says. In his designs, he seeks to revitalize traditional architecture by incorporating aspects of traditional design, such as architectural elements from Hindu temples. 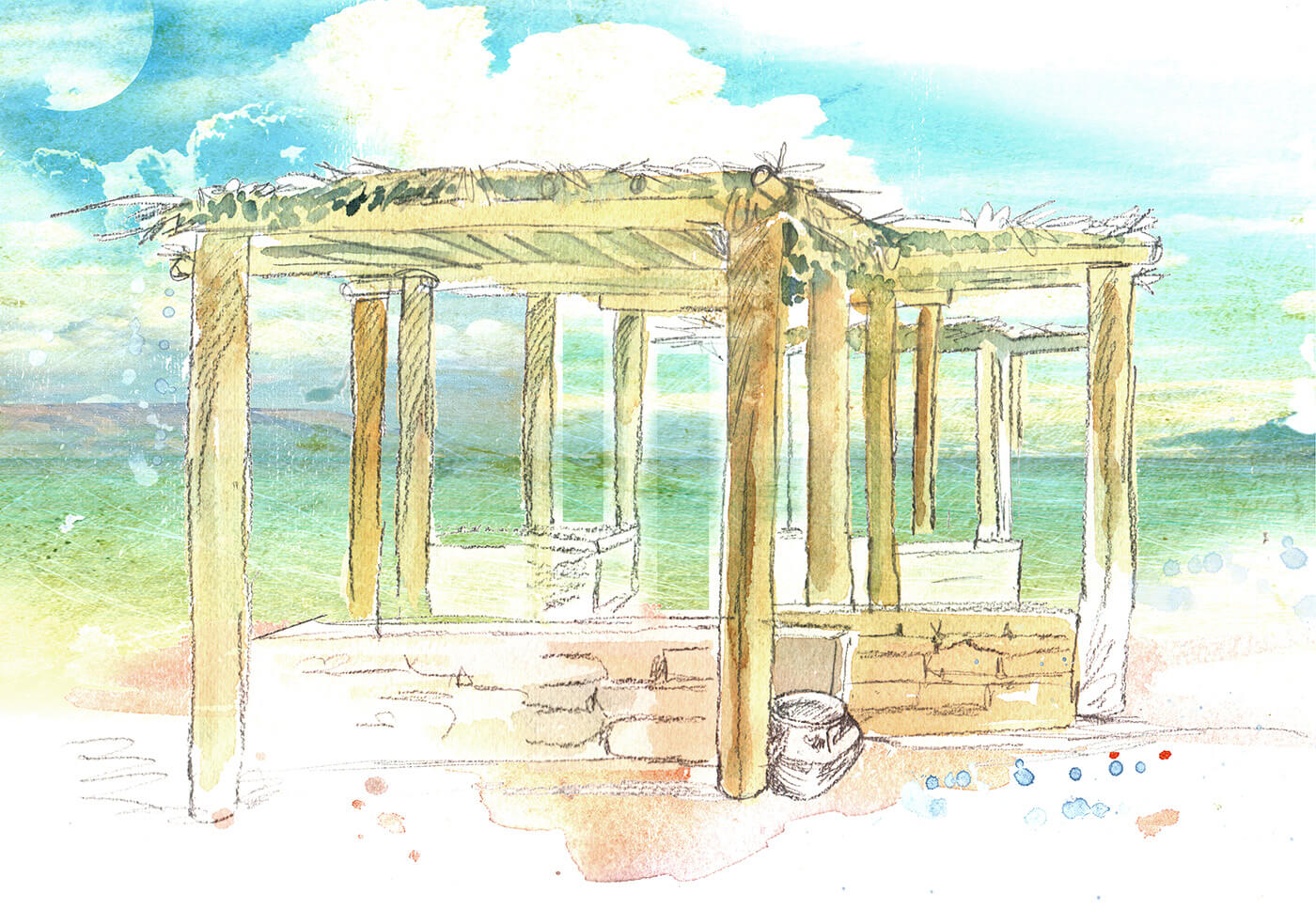 Indigenous architecture is well-suited to extreme Arizonan heat and climate.

These cultural and environmental benefits stand in contrast to Western architecture in the U.S. and Canada, where housing laws, markets, and architectural standards have commodified housing and stripped non-monetary values from design priorities—values like community strength and resiliency. A typical suburban home may have a yard to impress the neighbors, but it isn’t designed to invite those neighbors in. Western architects are trained to build housing for “efficiency and mass appeal,” such as the developer homes, or “purely aesthetic,” overly reliant on slick or sexy imagery, says Dalla Costa.

In her work, Dalla Costa hopes to build traditional values into Western architectural training programs while helping indigenous communities begin to revitalize traditional architecture in Arizona. And there are others working to do this, too.

The organization Red Feather partners with indigenous communities in Arizona to increase access to healthy housing. Instead of promoting the creation of new homes and communities, Red Feather works with tribal members to eliminate health risks in traditional—but dilapidated—houses. Also in the Southwest, the Sustainable Native Communities Collaborative plans and researches with tribes to design culturally relevant and environmentally friendly projects that promote community self-sufficiency. Joseph Kunkel, the executive director of SNCC, is a Cheyenne tribal member and visiting professor at ASU who has recently partnered with Dalla Costa.

This movement to revitalize traditional housing in Arizona has implications that extend beyond Indian Country.

It calls into question whether Western housing truly serves our needs as a home—not just a commodity. And it forces us to consider the connection between architecture, design, and cultural values. For example, what do homes with large garages and tiny kitchens say about modern American culture? Do the standard models we see in communities today support the cultural and socio-economic diversity of this country—or do they force cultural assimilation?

And how can we create homes that represent the cultural values we want—homes that are sustainable, healthy, and that build strong communities—without appropriating traditional architecture? Perhaps this is where settler-colonial communities will need to think about how they can support indigenous architects. As more and more Native-owned construction firms open, how can non-indigenous people support them?

Beginning to answer some of these questions is a step toward building housing justice for all our unique communities—on the reservation and beyond.

This article was originally published at Yes! Magazine. It has been re-published st IC under a Creative Commons License.