Members of the Indigenous Guard Killed by FARC Guerrillas in Toribio, Colombia

The Guard had encountered guerrillas from the Sixth Front of the FARC erecting signs throughout the community commemorating the third anniversary of the death of FARC leader Alfonso Cano, killed by the army in November 2011. The guerrillas rejected the Guard’s request to leave the community and continued dispersing propaganda materials related to the FARC’s on-going peace negotiations in Havana.

When the Guard returned in greater numbers to remove the signs the guerrillas shot the Toribio Guard Coordinator Manuel Antonio Tumiñá twice, killing him instantly. Daniel Coicué of the San Francisco Guard also received two bullet wounds and died while being taken to Toribio’s medical centre.

The Nasa have requested the departure of all legal and illegal groups from their territories, and declared themselves to be in a state of permanent resistance while such groups remain on their land. Colombia’s Defence Minister responded to the request by alleging that the indigenous movement had been penetrated by the FARC, despite frequent guerrilla attacks on indigenous spiritual leaders. The army has conducted unprovoked killings of Nasa people, and paramilitary forces have issued death threats against indigenous leaders in the region.

Nasa villages are spread out across a narrowing in the plains between the eastern and central cordilleras of Cauca province, a territory which offers a highly strategic corridor for the trafficking of drugs and arms between the two mountain ranges. Toribio itself has been so beset by conflict that Colombian Pres Juan Manuel Santos held a cabinet meeting in the town to assert that nowhere was off limits to the government, during which rebels fired on helicopters from the neighbouring hills.

IC visited Toribio and San Francisco in March this year, following a four day battle that involved FARC guerrillas fighting the army over possession of Toribio’s main square. The Indigenous Guard had gathered the community inside Sites of Permanent Assembly, buildings in which bedding and stocks of food are held to last civilians through the frequent conflicts. 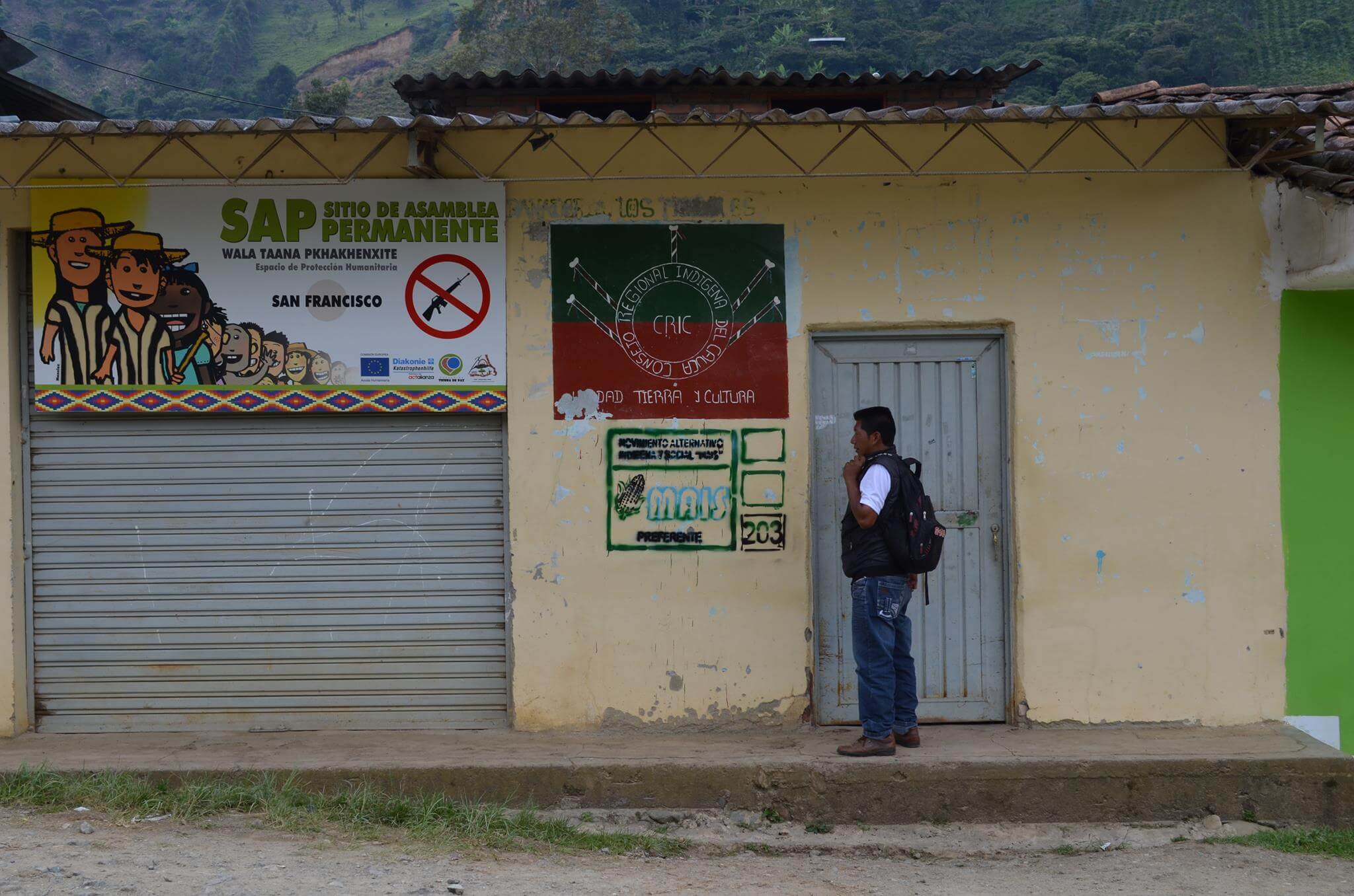 Site of the permanent assembly in San Francisco (Robin: Llewellyn)

Neíder Escue is Coordinator of San Francisco’s Guards. Holding the staff of office that all Guards must carry during their two year elected terms, he described how every night the Guards man a roadblock between San Francisco and Toribio to identify all who pass. They also mount patrols through the territory monitoring the activities of armed groups, asserting the authority of the indigenous councils, and seeking to end the illegal mining that is poisoning water sources with mercury. Their work never ends however: “When we’re working on the parcels of crops, we’re also watching the land” he says.

Much of their efforts are also spent persuading the young not to enlist with the FARC who tempt them with goods such as cell phones. Raising indigenous consciousness is a key part of this, he says, and the community as a whole also seeks to develop futures for indigenous youth through developing new business enterprises such as organic coffees and fruit products.

The success of such efforts arguably requires changes in the wider economy, however. In the offices of Toribio’s Radio Nasa, journalists voiced concerns that a successful culmination of the peace talks in Havana would not end armed conflict in a region affected by illegal mining, drug trafficking, and a rising presence of criminal groups such as the Aguilas Negras, Urabeños, and Rastrojos. They argued that the persistence of a neo-liberal economic model which privileges mining and foreign investment at the expense of small scale agriculture will only see continuing desperation, violence and criminality in the countryside. Small scale agriculture has been weakened by free trade agreements, and undermined by a strong peso driven up by mining exports.

The houses of Toribio are covered in murals supporting the ‘Minga of Social and Communal Resistance’, a movement born in the region that seeks to build a new Colombia based on human rights, a rejection of free trade agreements, and the development of communities by themselves in ways which respect the environment. The message has been spread through Colombia by marches and meetings in a process known as “walking the word” of the Minga, and shared values have been developed with non-indigenous campesinos, urban Colombians, and Afro-Colombian communities. 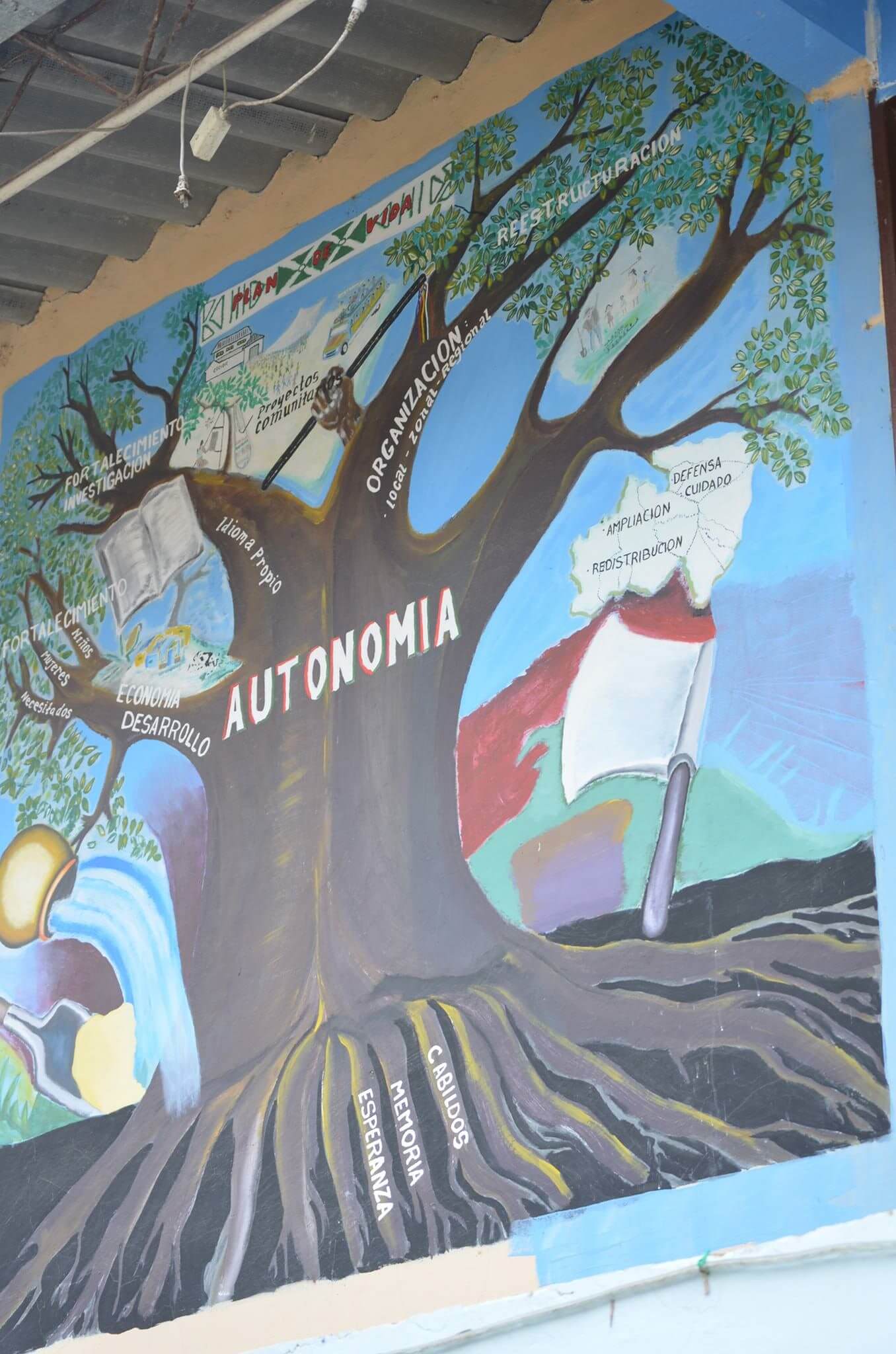 One of many muraled buildings in Toribio (Photo: Robin Llewellyn)

The success of a broad and loose movement has brought its own challenges: Negotiations with representatives of the state inevitably restrict the numbers of those involved, and the propensity of some leaders to make agreements based on new agendas has led to disputes over whether the aims of the movement are being sacrificed. According to an activist in the communications team of the Association of Indigenous Councils of Northern Cauca (ACIN), the movement should be seen as a template for communal action that has achieved significant gains for the Nasa, and one that other communities of Colombia can learn from in reasserting their control over their lands and resources.

The beginnings of the modern Nasa movement saw them struggling successfully to reclaim ancestral lands from illegal takeover by sugar plantations. They overcame massacres and state violence, and then moved on to developing autonomous development agendas and to freeing their territories from armed groups.

The recent killings by the FARC demonstrate how dangerous the process of self-government remains. Dario Tote, Governor of the Indigenous community of Coconuco said that the deaths display the permanent threat posed to those defending their own territory, who must daily risk sacrifice at the hands of those involved in the armed conflict.

Their vulnerability is undeniable, but Tote added: “We are solely armed with thought, with words, and with the staffs of our mandate, and with these we advance our actions.” 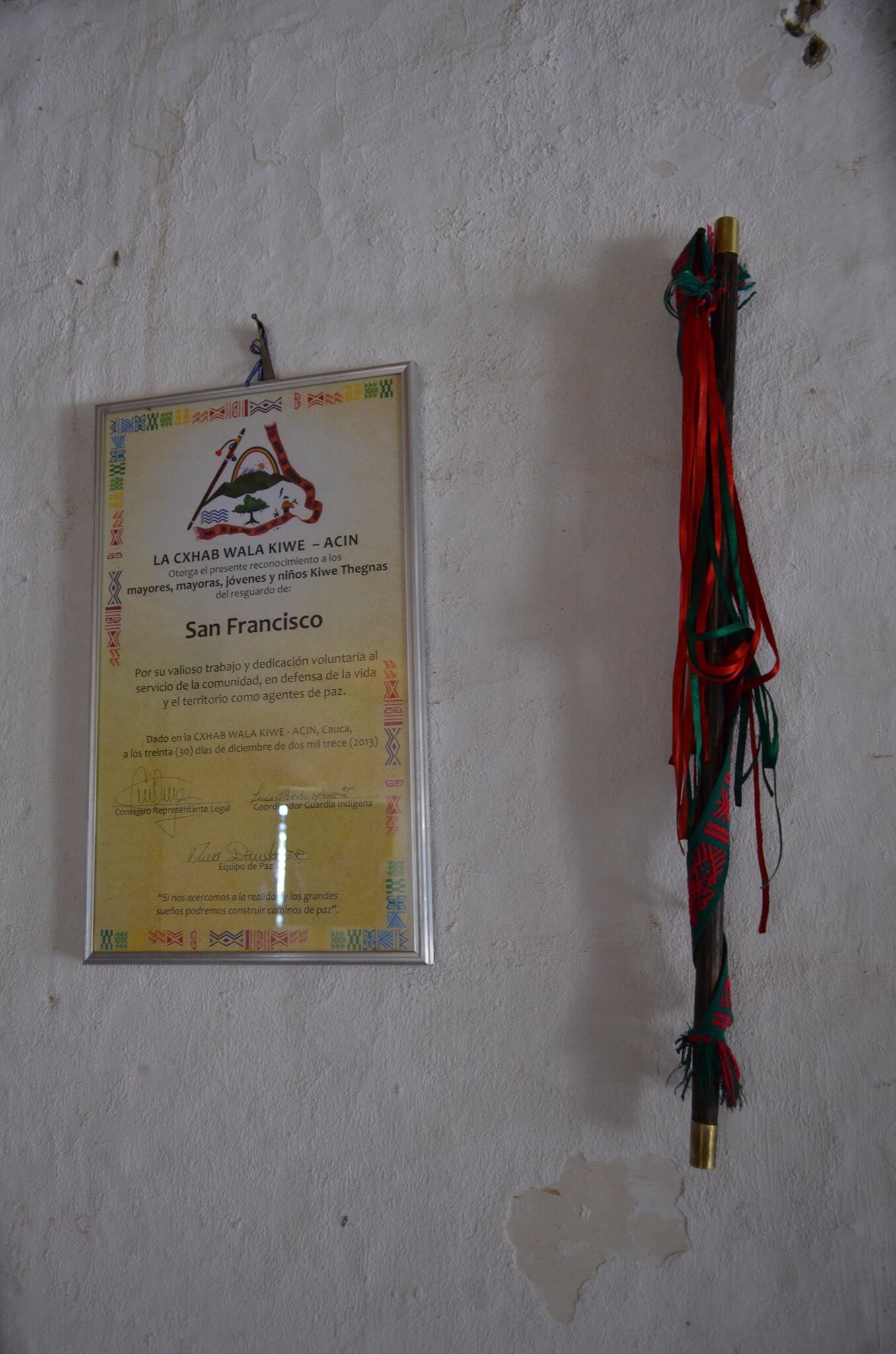 Staff of the indigenous guard in the site of Permanent Assembly in San Francisco (Photo: Robin Llewellyn)