Colombia: “We Will Remove the Machines Ourselves” 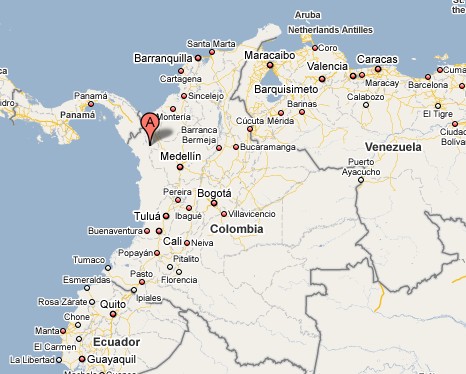 The Embera, an Indigenous community in the Choco region of Colombia, have warned the U.S.-based Muriel Mining Corporation (MMC) to stop exploring for resources within their traditional territory.

According to the Embera, the company is there illegally because it failed to properly consult them or receive their informed consent.

The company claims that they have “letters of agreement” which give them permission to explore for minerals such as gold, copper and molybdenum. However, the Embera say these agreements are fraudulent because they are the result of meetings with only a handful of representatives — all of whom failed to respect the Embera’s traditional, consensus-driven decision-making process.

“Here we are all in contrary to the agreement. Everyone here has said no we are not with the company. We have never arrived at a point to be with them and we will never arrive at the point where we will sign,” states one representative.

The company’s presence is a grave concern to the Embera, because it threatens Ellausakirandarra or Dog Face Hill, which the Embera hold sacred.

“If Muriel Mining does not end its exploration of our sacred lands, we will go up to the mountain and remove the machines ourselves,” states another representative. “This is why we are here, these things are not legal. We did consult with the communities.”

The Embera also fear the company will bring pollution to the rivers, destruction to the region’s biodiversity, and that they themselves will suffer irreparable damage to their natural economy as well as the dispossession and loss of their land rights.

The company holds a concession to operate within the Embera’s territory for the next 30 years, with a possible extension of 30 more.

On January 9 a group of Embera mobilized to confront the company, but they were turned away by the Colombian Army, who was sent in a few days earlier to protect the company’s interests.

Nevertheless, the Embera say they are prepared to return, with hundreds of members from neighboring tribes, if their rights aren’t respected.

Rainforest Rescue has put together a letter you can send to Colombian officials (in Spanish), asking them to respect the Embera’s rights, stop the company’s activities, and end the ongoing militarization of the region. You can read and send the letter here.