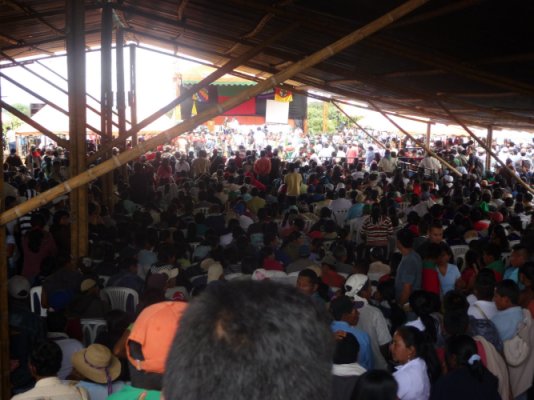 Following Sunday’s unprecedented popular encounter between Colombian President Alvaro Uribe and more than three thousand People, it was decided that, after three weeks of protests, the Indigenous and Popular Minga (Mobilization) will continue.

Here is a communique by the Association of Indigenous Councils of Northern Cauca (ACIN) explaining the reasons behind this decision.

For more updates on the Minga, visit mamaradio.blogspot.com

On Sunday, one of the most insulting aspects of the so-called public encounter between the Government and the Popular Minga in La Maria, Piendamó, Cauca was the condescending attitude the government showed towards its counterparts, the indigenous interlocutors. This attitude was evident in every issue that was discussed in the debate. The President repeatedly asked his ministers to read aloud parts of the laws and of the free trade agreements that are in question. In essence, he was calling us ignorant, ‘you don’t even read what is contained therein.’ ‘Pay attention, you insipient and inferior beings, so that you understand.’

The government did not learn its lesson from that one Sunday night in 2005, when the public referendum on the FTA was concluding, and 98% of the voters said “NO” to the accord. At the time, the Minister of Agriculture called the ACIN to see if he could talk on our radio station. According to him, he had failed to explain the details of the treaty to the people, and that “dark forces” were behind the popular referendum that had just rejected the accord.

The response that the leadership gave back then is valid today. In an attempt to “explain to us,” the government expresses racism and arrogance. They assume that we are inferior, and therefore, are incapable of understanding these issues for ourselves. This is why they supposedly need to explain things to us. Well, we need to remind them that the Constitution of 1886 has been replaced, and we are not “insipient beings.” We, the indigenous people, understand quite well. Don’t treat us like minors.

In the face of “dark forces,” there was (and is) an ongoing threat. The pretext. Those who would oppose the government are “terrorists,” and therefore, should be treated with repression. You are either ignorant, or a terrorist, or you should be on bended knee. These are the options they leave you.

To illustrate clearly that when it comes to the FTA, there is no need for such an arrogant or a threatening position to take towards us, we invite you to read this text, where we review all the concrete reasons that explain clearly why we are opposed to the free trade agreement. These are reasons not only relevant to indigenous communities, but presented by the indigenous communities for all the people and the entire citizenry. Please read:

But furthermore, there is something even more perverse than the condescension, the racism, and the threats. It’s the fact that the President actually said “We all need to ‘desembejucarnos….’ (or calm down). The so-called “”Campesinos embejucados de Colombia,” (The Extremely Angry Peasants of Colombia) made public a racist threat against us on August 11, 2008. This perverse missive of terror, that announced the death of PaHECES (in a derogatory reference to the name Páez, the Spanish term for Nasa) starting at midnight that same day, is the source of this specific term: embejucados.

The President never renounced this text. He never announced that those who wrote the missive should be investigated. He never suggested that the embejucado author of this text should be prosecuted and brought to justice. He never acknowledged that since its release in August, at least four indigenous activists have been assassinated by dark forces in northern Cauca alone. Nevertheless, on Sunday, in front of over 3,000 threatened members of the community, he used this term in such a relaxed and open way, the same term that signs the racist sentence of extermination against indigenous peoples.

It’s either a mental lapse, or it is a reiteration. Regardless, the President has made clear where these threats come from, and who are the embejucados. Read for yourselves this threat, and decide whether or not this comment is just a slip from the embejucado president of Colombia.

It’s a serious matter from which the actual President could be investigated and judged for threats of genocide against the Nasa people. Read for yourselves and respond: Would you have said the same things he said, inviting us all to “desembejucarnos”? http://www.nasaacin.org/noticias.htm?x=8411

After the encounter in La María, Piendamó between the Minga Popular and President Álvaro Uribe Vélez, where it became abundantly clear the profound contradictions of thought between the life plans of the people and the death plans led by the government, the community that had gathered there decided to continue walking their word towards Bogotá, the capital.

On Monday, November 3rd, representatives of all the regional indigenous organizations, as well as some members of various social organizations, met to evaluate the way the Minga has gone up to now, and which way to proceed. The overall objective now is to get everybody together for the Primary Constituent Congress, to listen, share ideas, reflect, with one another, in cities and towns throughout Colombia. And along the way, we will meticulously pick up all the pains and the proposals of various social and popular sectors, in order to begin to build a movement of popular unity, as the first step to achieve a truly participant dialogue of the people and their processes throughout this country.

So therefore, this week, the coordination of all these processes will take place, much like what was done in July 2007 when we organized the national visits in our campaign that we called “The Country We Want,” which took us to Armenia, Ibagué and Bogotá. At the same time, this march towards Bogotá will give us an opportunity to share the truth to the public about what occurred in La Maria Piendamó, and about our political and organizational process, because we are not terrorists. We are common people who work and struggle for the defense of life and our territory. This we are obligated to do because of the constant disinformation of the mass media, which don’t reflect the realities of the many processes of peaceful resistance in the country.

Next Sunday, we will concentrate in the University of Valle in the city of Cali, in order to begin our march on Monday, November 10th, to walk our Word alongside all those Colombians who still believe that it is possible to begin to construct another World: a World of people without owners. That same day, step by step, we will commemorate the 24th anniversary of the assassination of the Nasa priest Álvaro Ulcué Chocué, killed in Santander de Quilichao, for the sole reason of trying to wake up the conscience of his indigenous brothers and sisters and oppose the domination of the large landowners of Cauca.