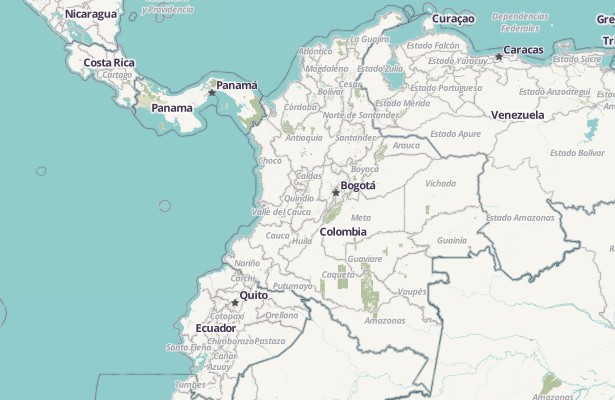 There are serious ongoing concerns for the safety of indigenous protesters in Colombia amid escalating violence against them by the security forces and after their leaders received a death threat from a right-wing paramilitary group, Amnesty International said.

Dozens of indigenous protesters, including many children, have already been injured when Colombian security forces appear to have used excessive force against the demonstrations, which started on 12 October and continue in several regions of the country.

Fears of further violence have been compounded in the past week after the Rastrojos paramilitary group called for “social cleansing” of indigenous leaders and groups involved in the protests.

“Most of the evidence gathered by Amnesty International in several parts of Colombia points to a deeply worrying and largely disproportionate use of force against the indigenous protesters by the police and the armed forces,” said Marcelo Pollack, Amnesty International Researcher on Colombia.

“The Colombian authorities must ensure the violence against the protesters is stopped and death threats by paramilitary groups, as well as the allegations of excessive use of force, are promptly and thoroughly investigated. Those responsible must be brought to justice in civilian – not military – courts. Failure to do so could pave the way for more casualties as the protests continue.”

Indigenous protests
Since October 12, thousands of indigenous people have been demonstrating in several Colombian regions. They are demanding respect for their rights which are increasingly threatened as mining, oil and other economic interests encroach on their traditional lands.

This wave of protests has prompted a violent response by the Colombian security forces, with some of the most serious incidents taking place in the south-western Colombian regions of Cauca and Valle del Cauca.

On October 16, riot police units (Escuadrón Móvil Antidisturbios, ESMAD) moved in to disperse an indigenous demonstration blocking the road to Buenaventura, in Valle del Cauca region. The police reportedly fired tear gas canisters – some of them allegedly filled with shrapnel – directly at demonstrators and also beat them repeatedly.

Concerns for safety
The death threats against indigenous leaders come amid this context of the Colombian security forces reportedly using excessive force.

The paramilitaries told the protesters to return to their homes within 24 hours or they would be considered military targets and would be singled out for “social cleansing” killings (limpieza social). The paramilitaries claimed the indigenous protesters were being used as “cannon fodder” by the guerrilla group Revolutionary Armed Forces of Colombia (Fuerzas Armadas Revolucionarias de Colombia, FARC).

“Given the reports of excessive force used against indigenous protesters in the past 10 days, we have very serious concerns about the safety of the indigenous leaders and members of the organizations named in the paramilitary death threat,” said Pollack. “In the past those labeled subversives or guerrilla collaborators have frequently been the target of serious human rights violations by paramilitaries, either acting alone or in collusion with the security forces.”

Amnesty International is also concerned that the recent reform of the military justice system, which will make it almost impossible to bring to justice members of the security forces implicated in human rights violations, may also have emboldened the armed forces and the police to use excessive forces against the demonstrators.

The organization urges the Colombian civilian authorities to investigate independently all allegations of excessive use of force by the security forces, and the death threats issued by paramilitaries against indigenous leaders and organizations.