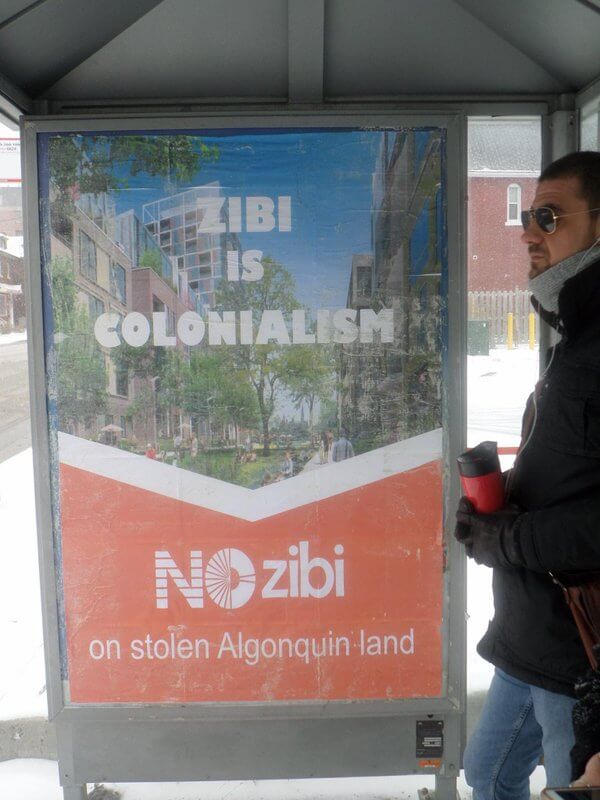 “An exercise in reconciliation” is how an Ottawa Citizen newspaper title describes the ‘Zibi’ development project – timed precisely to counter today’s “It Is Sacred” walk in honour of the at-risk sacred site slated for the development.

But what messages should the general public really be exposed to in order to foster a helpful understanding of this situation?

The Algonquin Grandmothers and Elders leading the walk are doing so with a stated desire to bring unity and protection for their sacred site located at the Chaudière Falls on the Ottawa River just over a kilometre from the Parliament buildings.

Josée Bourgeois of the developers’ Memengweshii Indigenous advisory council opens her Citizen opinion piece by declaring her concerns about the “attacks launched” against the planned development project.

Who is attacking who may depend upon your perspective. Perhaps it is Indigenous Rights and their proponents that are being attacked here?

Nine out of the ten federally recognized Algonquin Chiefs have publicly declared their unified intention to protect Akikodjiwan, the sacred site, from the development – to assert their Indigenous Rights for this special site on their unceded territory – but Bourgeois only mentions one Chief in her piece, that of her community of Pikwakanagan, who has been the only one supporting the development project.

She writes, apparently referencing the sacred walk, “These attacks endorse or rely on self-proclaimed Elders and Kokums (grandmothers in the prophetical sense) in order to create opposition to Zibi, a project mixing condos, office and retail space …”

She doesn’t explicitly refer to the area as being sacred – her description is of a historical gathering place for portages, where “in more recent years” the one island not slated for development has become a place of “celebration and spirituality” (referring to Victoria Island, where Attawapiskat Chief Theresa Spence held her hunger strike).

This is a bit different than the resolutions brought forward by Algonquin Chiefs and passed by the Assembly of First Nations (AFN and AFN-Quebec&Labrador) demanding the return of the site to Algonquin stewardship that clearly state, “The Akikodjiwan (Chaudière) waterfalls and the adjacent waterfront and islands are a sacred area for all Algonquin Peoples,” and the archeology research published late last year that had researcher Randy Boswell describing how, “The newly confirmed location of this [5,000 years old] cemetery, a natural canoe landing that marked one end of a well-worn portage route around Chaudière Falls, only deepens the symbolic significance of that great cataract, an enduringly important spiritual site for First Nations and a natural wonder seen as second only to Niagara Falls by early European explorers.”

The concept of “collaborative consent” is what Bourgeois uses to describe the “spirit” of the United Nations Declaration on the Rights of Indigenous Peoples (UNDRIP), drawing upon terminology from former AFN grand chief and now oil company collaborator Phil Fontaine, and she urges “the Algonquin Anishinabe people who genuinely care about the site and want to have a say in how it is developed to sit at the table with us or at least find out how Zibi can help realize their goals.”

‘Zibi’ was Windmill Development Inc’s choice for the name of their condo/business project, an Algonquin word for river selected in a competition without proper protocol through Algonquin communities (no Algonquins were on hand for the company’s public naming event). What ‘goals’ can this commercial development project realize for those who don’t want commercial development on their sacred site?

In terms of ‘sitting at the table’, the majority of the Algonquin Chiefs have all along been asking for real consultation: not to meet with the developers, but for discussions with the government, who have the responsibility to honour the Canadian Constitution and the UNDRIP, including ‘FPIC’ (Free, Prior, and Informed Consent). Unfortunately, governments of all levels have mostly ignored – and continue to ignore – these requests for communication, discussion, and consultation.

As Maurice Switzer noted in a previous Ottawa Citizen op-ed where he described the ‘Zibi’ project as a “litmus test” of Prime Minister Justin Trudeau’s promises to improve the country’s relationship with Indigenous Peoples: ““We are committed to sitting down early, at the earliest possible moment, on every single thing that will affect indigenous people in Canada,” [Indigenous Affairs minister] Carolyn Bennett told a CBC interviewer in February, adding her belief that it is “hugely important” that all parliamentarians, government departments, provinces, territories, mayors and municipalities understand this approach.”

But Bennett has yet to meet with the nine Algonquin chiefs about this issue, even though the communications to her INAC office on this issue pre-date her taking the minister-ship last October, and it has been half a year since the AFN-QL and AFN passed their resolutions calling for government action – hopefully the wait will not be too much longer before the “earliest possible moment” she committed to is acted upon.

This site, Akikodjiwan, is something of a microcosm for the colonial history of the country:

WHAT ARE WE RESPECTING?

Josée Bourgeois ends her piece by saying, “One way or another, I hope and work for peace and respect – within our Nation, and with our settler friends and partners.”

Hopefully the government – and all Canadians, including the developers – will agree, and this will mark a turn in the course of our country’s history, with government actively ensuring Indigenous Rights are respected instead of pretending not to notice and/or participating themselves in the violation of these Rights. How can we have peace and respect otherwise?

The Algonquin Chiefs cite four different sections of the United Nations Declaration on the Right of Indigenous Peoples – articles 11, 12, 25, and 32 – that they feel apply in this situation. You can look up what these say if you aren’t familiar with them, and then decide for yourself if you think the Chiefs are correct in their assertions. And if so, what is a good way forward at this point?

Many people may instead end up with the impression that the proposed development is a ‘no questions needed’ model of reconciliation that should be celebrated, rather than seeing the opportunity to really deal with some of the deepest issues of Canada’s colonial past/present – thus allowing for new possibilities of different, more reconciled and hopeful futures.

About the author
Greg Macdougall has been involved with Indigenous solidarity work in and around Ottawa since 2008, around the time he helped co-found the grassroots group Indigenous Peoples Solidarity Movement Ottawa (IPSMO); more of his writing and multi-media about this sacred site situation can be accessed at http://equitableeducation.ca/tag/chaudiere-falls

Disclaimer: He was recently told “You and your non native self stay the $%÷@ put [sic] our business” by Josée Bourgeois on Facebook after posting a link to the late William Commanda’s 2010 presentation of the Asinabka Vision to a City of Ottawa committee, but has since been reassured by more experienced Indigenous activists, Algonquin and non-Algonquin, to keep on working in solidarity.

Open Letter to the Memengweshi Council re: their Windmill Development Partnership http://anishinabeknews.ca/2015/07/22/open-letter-to-the-memengweshi-council-re-their-windmill-development-partnership/