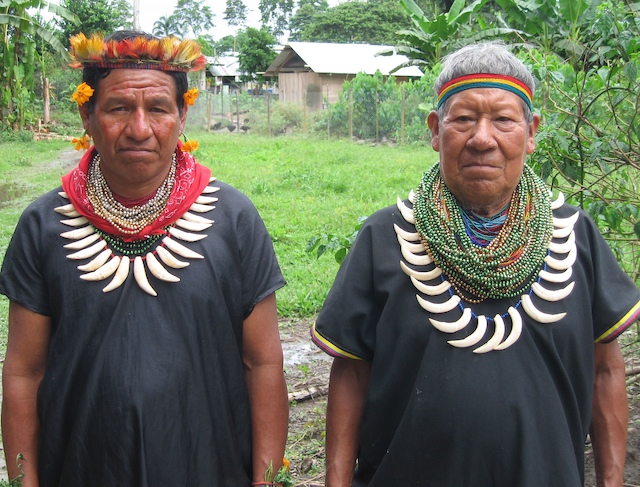 The Transnational Institute (TNI) has just released a report which examines the impact of coca cultivation, petroleum activity and armed conflict on Cofan, a people traditionally living in the tropical forest between Ecuador and Colombia.

Today their territory, culture and very survival are being threatened by the dynamics associated with the drugs trade, the armed conflict and large mega-projects being developed in their territory.

Here’s the Introduction to the report (links added by me) followed by TNI’s recommendations to the Government of Colombia:

By examining the recent history of the Cofán people, this paper shows how, under the guise of the war on drugs and terror, the way is being cleared for major economic interests in the Lower Putumayo. Paramilitary groups have been the principal ally of large investors, corporations and public forces, and are just as active in 2007 as they were before they were demobilised. This paper specifically examines the impact of coca cultivation, petroleum activity and the armed conflict in Cofán territory on this ancestral community.

The Cofán people’s ancestral territory is located in the tropical forest between Ecuador and Colombia, near the major rivers that flow from the Andes mountains to the Amazon basin. About 1,000 Cofán live in Colombia, most of them in 11 communities in the municipalities of San Miguel, Valle del Guamuez and Orito, in the department of Putumayo. Their territory, culture and survival are seriously threatened by dynamics associated with the drugs trade, the armed conflict and large mega-projects being developed in their territory.

Since 1999, many members of Cofán communities have been displaced because of frequent incursions into indigenous territory, selective assassinations, disappearances, forced recruitment, accusations, lawsuits, sexual abuse, destruction of property and the destruction of legal crops by aerial spraying (also see this petition). This displacement is not only the result of armed actions by the various factions fighting in the area; it must also be seen as the outcome of a strategy for expropriating lands that are part of the Cofán’s ancestral territory.

* The Colombian government must enforce the legal groundwork laid by the ILO and the 1991 Constitution, which establishes that when indigenous communities are affected, as in the case of aerial spraying, petroleum exploration and development, and the development of mega-projects on ancestral lands, there must always be prior consultation.

* The Colombian government must also respect the national and international legal framework that protects the right to truth, reparations and justice for victims. Instead of benefiting victims, the Justice and Peace Law and the Rural Development Law are strengthening the political and economic position of those who violate the victims’ rights.

* Instead of eliminating coca cultivation in the Lower Putumayo, aerial spraying has functioned as a strategy for robbing people of their territory in order to promote the development of economic interests in the area. Under no circumstances should the reimplementation of this strategy, which has contributed so greatly to the extermination of the Cofán people, be considered.

* The Colombian state is obligated to guarantee the safety and well-being of its ethnic minorities. This is even more crucial in the case of small indigenous communities such as the Cofán, who live in a constant state of risk.