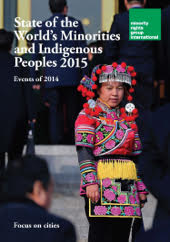 MRG releases State of the World's Minorities and Indigenous Peoples 2015
Support our journalism. Become a Patron!

The battle for respect for the rights of minorities and indigenous peoples is increasingly being played out in cities, says Minority Rights Group International (MRG) in its annual report.

The organization’s flagship annual global report, State of the World’s Minorities and Indigenous Peoples 2015, focuses on cities, and explores the many challenges communities face in urban areas, from segregation and lack of services, to targeted violence and exclusion.

‘The world’s greatest cities, large and small, are all examples of growth founded on cultural diversity, innovation and integration. But the urban reality for minority and indigenous communities is too often marked by slum conditions, police harassment and ghettoization,’ says Mark Lattimer, MRG’s Executive Director.

Minorities and indigenous peoples comprise many of the world’s urban slum dwellers.

From Dalit manual scavengers in ‘sweeper colonies’ in Dhaka, Bangladesh, to Afro-Colombians plagued by violence and extortion concentrated on the fringes of Colombia’s major cities, to communities fleeing ethnic violence in Democratic Republic of Congo congregating on the edges of Goma, minorities and indigenous peoples in informal settlements struggle with grinding poverty, lack of basic services, evictions, violence and sexual assault.

In Burma‘s Rakhine state, thousands of Muslims displaced by communal violence are in isolated ghetto-like camps outside the city of Sittwe, whilst others are concentrated in the city’s only Muslim neighbourhood, which they are not allowed to leave. In Bulgaria more than half of Roma live on the margins of cities, whilst in Paris, France, minorities and migrants are clustered in peripheral banlieues with poor housing, widespread unemployment and high levels of crime. Acholi Quarter in Kampala is largely populated by formerly rural Acholi from Northern Uganda, uprooted by years of conflict. The area is known for substandard housing, poor health and limited job opportunities.

Urban areas, although providing economic opportunities, can often magnify existing patterns of discrimination, says the report. Even among the urban poor, minorities and indigenous peoples may suffer exclusion.

Minority clans living in the informal settlements of Mogadishu, Somalia, which have sprung up throughout the city as migrants flee conflict in the country, continue to be plagued by insecurity, sexual violence and discrimination, making it impossible for them to make ends meet. In Lahore, Pakistan, the bulk of the city’s street sweepers are Christians – a fact that reinforces their stigmatization – whilst most of their supervisors are Muslim. The police killings in the United States of African-Americans were interpreted by demonstrators as reflecting institutionalized racism within the police force, provoking broader discussion of the inequalities experienced by black citizens, particularly in cities.

The pressures of assimilation in urban areas can also pose a threat to minority and indigenous identities and culture.

In Australia while 56 per cent of Aboriginals in rural areas speak an indigenous language, this figure falls to just 1 per cent in the country’s cities. Many young Endorois in Kenya move to cities away from their rural cattle-herding lifestyle in search of jobs and a better education. With little chance of returning home, they find themselves increasingly out of touch with their culture.

Some minorities may even disappear from the urban map altogether, such as in the Middle East.

Many of Beirut’s once diverse neighbourhoods have been left homogenized by the increasingly sectarian nature of Lebanon’s conflict – a legacy that sadly persists to this day. In Iraq ongoing violence is increasingly leading to the eradication of religious minorities in cities. ISIS, besides displacing minority communities in the areas under its control, has also destroyed churches, shrines and non-Sunni mosques. As a result, the historical legacy of centuries of coexistence is being erased.

Nevertheless, the report also includes numerous cases of inspiring success stories for minorities and indigenous peoples in cities, as well as examples of the substantial benefits their inclusion can bring for all urban residents.

In Oceania, for example, traditional indigenous solutions to environmental hazards are being applied to the defence of urban areas from climate change. Similarly, in Baguio City in the Philippines, indigenous women are earning a living using traditional cultural methods for recycling.

‘Protecting minority and indigenous peoples’ rights in the city benefits not only the communities themselves, but the entire urban population. Promoting diversity and inclusion is therefore essential for any city seeking to become successful, sustainable and just in the long term,’ adds Lattimer.

State of the World’s Minorities and Indigenous Peoples 2015

This year’s edition of State of the World’s Minorities and Indigenous Peoples explores the many challenges communities face in urban areas, from segregation and lack of services to targeted violence and exclusion