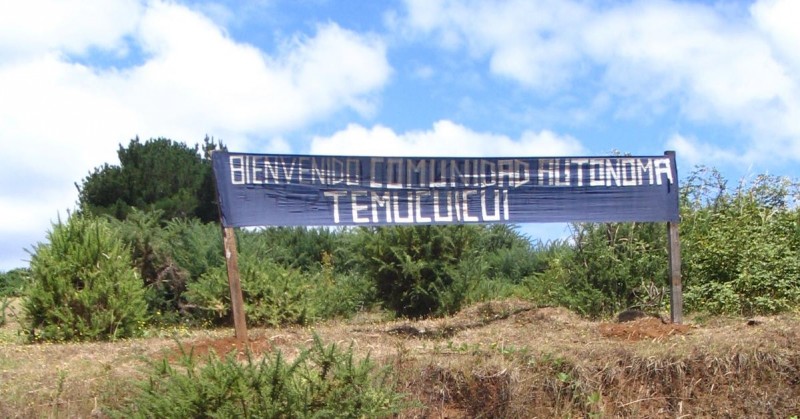 “Welcome to the Temucuicui Autonomous Community” Photo by Donmatas1 on Flickr (CC BY-NC-SA 2.0)
Support our journalism. Become a Patron!

In the early morning of Wednesday, October 9, riot police and members of the Group of Special Operations (GOPE in Spanish), an elite, special unit of the Chilean Police, raided the Temucuicui Autonomous Community [es], an indigenous Mapuche community located near the town of Ercilla in the Araucania Region of Southern Chile.

A self-denominated “autonomous” community, Temucuicui has occupied what they consider to be ancestral lands for over two years. They have resisted several eviction attempts, and their resistance has landed many community leaders and members in jail.

The land where the community lives is part of what the Mapuche call “Wallmapu”, meaning Mapuche country, where clashes between police forces and Mapuche activists are common. Currently, these lands are contested, but legally owned by landowners Rene Urban, Martin Ruf and the Zeit family.

News site Terra [es], one of the few to speak to the police, cited [es] Commissioner Major Salomón Zenteno, the Commissioner in charge of the 2nd Police Station of Malleco, explaining details about the operation that morning:

“This eviction order began to be [implemented] at around 09:15 with the participation of approximately 60 officers under the command of Colonel Marcelo Teuber Muñoz from the Malleco prefecture”, said the Commissioner. He added that “we had two arrests: Mr. Mijael Carbone (werkén or spokesperson) and his partner. During the eviction, a police woman was injured in her hand by Mijael Carbone’s partner when she kicked repeatedly while resisting arrest.”

[Note: In Latin America, the rank of Commissioner often refers only to the police official in charge of a single police station and not the entire police force, as is often the case in the UK or other countries.]

In a public statement, the community expressed its complaints and concerns about this operation and the broader context in which it occurs:

1.- On Wednesday, October 9 of 2013, two serious, violent incidents were carried out by the repressive apparatus of the Chilean State. Once again, they have violated our rights and the tranquility of the community, through the intrusion and the violent militarization of our lands. They have raided and destroyed all our goods and the crops that we possess in lands that we consider under “productive recovery” and which today are controlled by private landowners.

3.- This serious and violent police advance demonstrates that the Chilean State does not have the political and administrative will to solve the demands of our community. The “will to dialogue” that they have supposedly expressed, is nothing more than a long-held practice of deceit and manipulation against the Mapuche People. For that reason, our community will continue to reivindicate our legitimate rights to stolen lands. We regret that government authorities have not been capable of solving our demands. They only have responded with the strong repression and mistreatment of our people and our Traditional Authorities. [They have] militarized and completely sieged our community

According to Werken (leader/spokesperson) Jorge Huenchullan, about 300 police officers violently entered [the community], destroying homes and running over a flock of sheep that belonged to the community, leaving 15 animals dead and several wounded. “All belong to the peñis (brother in Mapudungun, the Mapuche language)

The Ajayula Magazine [es], republished [es] a post with the testimony of a Susana Curinao, a 25-year-old woman and member of the Temucuicui Autonomous Community. She explains that in the morning of October 9 they saw police forces destroying fences the community had erected to protect their sowed cereals. Mijael approached the person who was in charge of the operation to talk to them, while Susana filmed everything with her cellphone. She says that at least 20 police officers grabbed Mijael and kicked him. When Susana ran over to the officers to ask them to release Mijael, two female officers grabbed her. She says that 12 officers “dealt with her”

They grabbed my head and hair to put me on the ground. They kicked me from behind while others tied my hands with something like a rubber band that put a lot of pressure in my hands. They put me in a police van. Inside, I suffered the worse that can happen to a woman anywhere. The softest insult I received was “indian whore, drunkard daughter, you smell like ass, rat’s descendant…”. They also said that one day they will make all of the Mapuche disappear, just like their General had done with the communists. I didn’t understand that much, but I think they referred to Pinochet…

On Twitter, many shared reactions using the hashtag #temucuicui.

Mijael Carbone and his wife detained, now in Angol, after violent raid in Temucuicui

Families of Temucuicui re-enter lands without fear of another eviction

In an article for Revista Anfibia [es], Carolina Rojas [es] explored the long-term effects of the violence:

Yesterday, police vehicles kept on arriving at ten in the morning. It was like the Gaza Strip, but only 535 kilometers from Santiago. Prime time news did not mention it. Karina Riquelme, lawyer of some of the community members, knows well about that indolence. “This has been the largest raid in history and no one seems to care”, she said.

Karina says that one thing is the damage done to adults and another is how children are broken. These children’s lives are confined to a war zone and only get brief moments of happiness when they play hide and seek to the sound of crickets, ride a horse or chase pigs and sheep. Those moments are only the interlude in a long continuum of violence. “Children go through these situations from the time they are months old. These are children that do not smile and their seriousness intensifies as time goes by…

To learn more about the Temucuicui community and their resistance, watch this interview [es] of Mijael Carbone by Prensa Opal from December 2012.

This work by Felipe Cordero / Global Voices is licensed under a Creative Commons (CC BY 3.0) License.