Chevron Lawyer Claims that Victims of Rainforest Contamination Are “Irrelevant”

On February 15th of this year, Doak Bishop, a lawyer representing the American oil giant Chevron, claimed that all 30,000 people affected by Chevron’s 16 billion gallons of oil pollution in Ecuador are and have always been “irrelevant”.

The Amazon Defense Coalition responded to the preposterous claim this week with the following statement:

Chevron Lawyer Claims that Victims of Rainforest Contamination Are “Irrelevant”

WASHINGTON, April 14, 2012 /PRNewswire-USNewswire/ — A lead Chevron lawyer has made the preposterous claim that the 30,000 Ecuadorian victims of the oil giant’s contamination are “irrelevant” to the court case that led to an $18 billion judgment against the company. 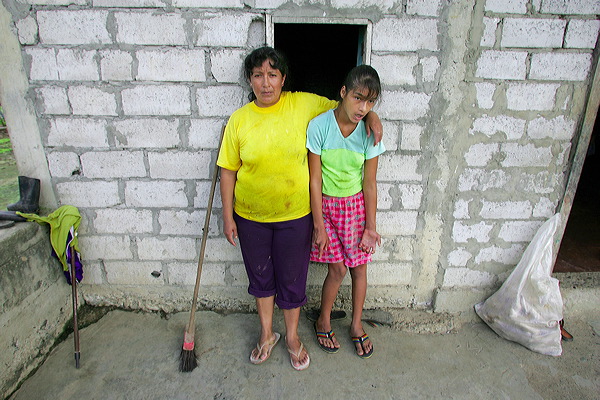 Carmen Guaman with her fourteen-year-old daughter Veronica at their home in La Primavera. Veronica suffers from a neurological birth defect. Photo: Lou DematteisDoak Bishop, a Chevron lawyer from the American firm King & Spalding, said the following before a panel of international investment arbitrators on February 15th:

“The plaintiffs are really irrelevant. They always were irrelevant. There were never any real parties in interest in this case. The plaintiff’s lawyers have no clients… There will be no prejudice to [the rainforest communities] or any individual by holding up enforcement of the judgment.”

Meanwhile, the Huffington Post published over a dozen photos of Ecuadorians who have died or have severe medical problems resulting from Chevron’s contamination. See here for photos, taken by Lou Dematteis. 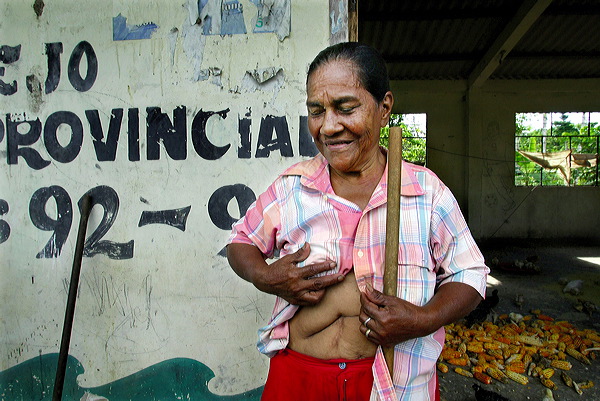 Maria Villasis shows the scars from four operations on her liver and gallbladder at her farm near Guanta oil well #8. Photo: Lou DematteisBy arguing that no Ecuadorians had been harmed or were in danger of being harmed, Bishop was trying to convince the panel of arbitrators that they should block the Ecuadorians from enforcing their judgment against Chevron in other countries, a strategy that has failed for multiple reasons.  See here.

Chevron has a long history of trying to dehumanize the Ecuadorians by denying their very existence or by belittling their culture, said Pablo Fajardo, the lead lawyer for the communities. 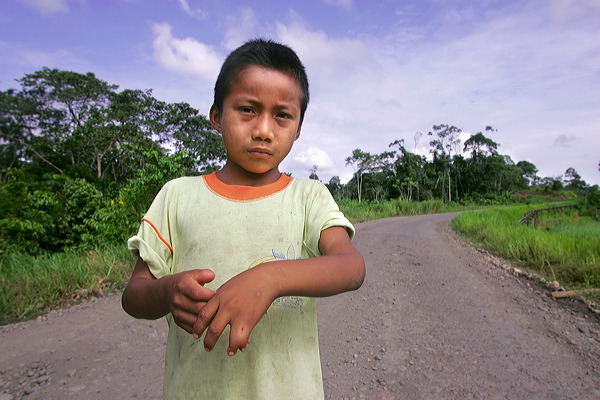 Nine-year-old Jairo Yumbo shows his birth-deformed hand on the road in front of his home in Rumipamba. Photo: Lou DematteisIn 2010, Chevron tried to claim the signatures of 20 of the 48 named plaintiffs in the lawsuit had been forged by their attorneys.  The charge was quickly rebutted after the plaintiffs appeared before a public notary to affirm their signatures were legitimate. See here.  Chevron engineers also belittled Ecuadorian indigenous leaders by making them wear Western clothes and suggesting that oil-laden streams were actually full of vitamins, according to published reports.

The existence and relevance of the Ecuadorians has been affirmed by multiple independent journalists, including those working for 60 Minutes, The Sunday Night Show  in Australia, The New York Times and The Washington Post. 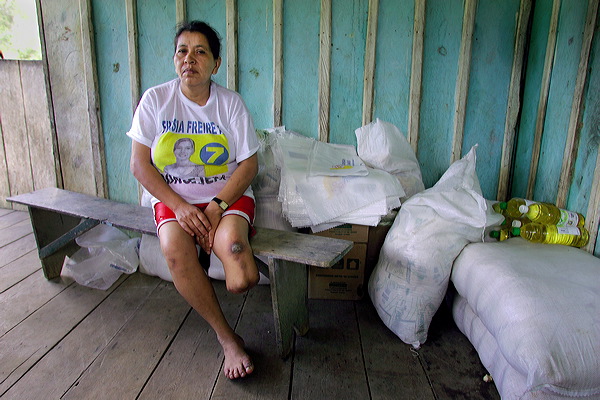 Her leg amputated because of a cancerous tumor, Modesta Briones sits in her house near Parahuaco oil well #2 in the Ecuadoran Amazon. Photo: Lou DematteisThe $18 billion damage award, levied by an Ecuador court, will be used to clean up Chevron’s deliberate contamination of the rainforest and provide clean drinking water and health care to the residents of the company’s former concession area.  The damage decimated indigenous groups and caused an outbreak of cancer, according to evidence relied on by the court in issuing the judgment. See this video for more information.

Chevron, under the Texaco brand, operated in Ecuador from 1964 to 1992. Chevron admitted dumping 16 billion gallons of toxic drilling fluids directly into waterways and streams relied on by local residents for their drinking water.

Photos appearing here taken by Lou Dematteis. You can find more at www.LouDematteis.com. For more information, visit www.ChevronToxico.com and www.TheChevronPit.blogspot.com.