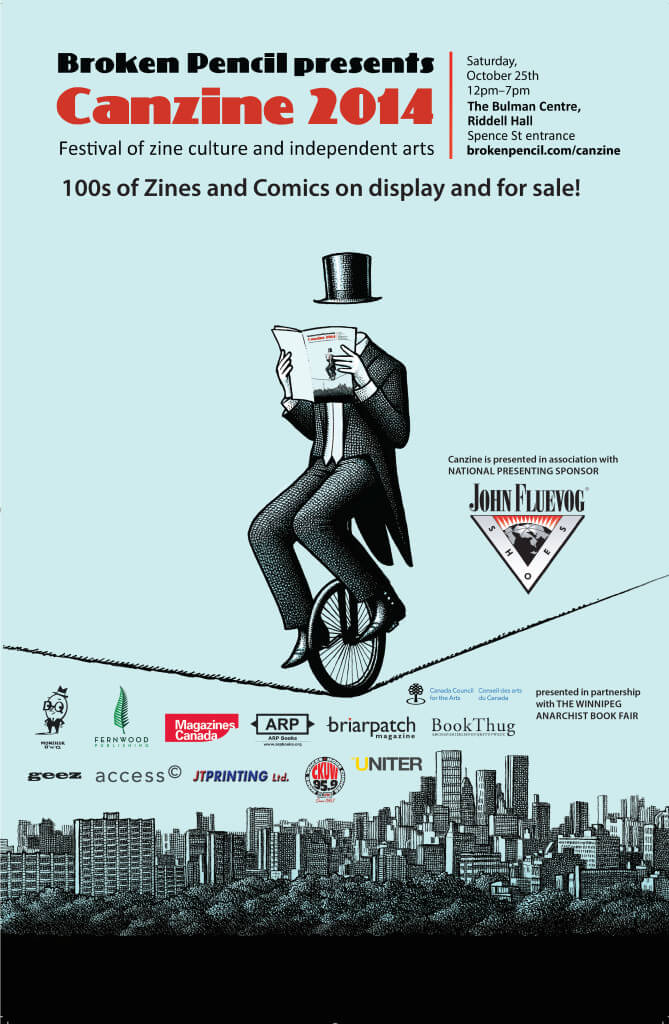 On Oct. 25, 2014, IC Magazine’s Editor and Publisher, John Ahni Schertow, took part in a panel discussion on print and digital media activism at CANZINE CENTRAL, Canada’s Largest Festival of Zines and Underground Culture. The event was presented by Broken Pencil in conjunction with the Winnipeg Anarchist Bookfair.

Due to formatting constraints, Schertow’s speech was replaced with an impromptu discussion about the purpose of IC Magazine and some of the challenges it has faced as an independent publication. For the sake of posterity, you can find his undelivered speech below.

I’d like to start off by pointing out in very broad terms that media plays an essential role in the success or failure of social, political, environmental and indigenous movements.

A poor media strategy might have us all trapped in a defensive position. Instead of taking control of events, we limit our movements by reacting to would-be opponents while they eagerly drain our resources and drown out our factual-based narrative with one based on fallacy, hyperbole and innuendo. As a result, the misguided masses who would otherwise stand on our side end up standing confidently against us, giving our opponents almost everything they need (majority consent) to achieve their ends at our expense.

A sound media strategy could dissolve such an unacceptable eventuality through a carefully constructed and consistent narrative that identifies an achievable set of goals, coordination between different media providers, well organized priorities and the use of tactics such as media swarming. Resource pooling could also help.

The complete absence of media can be a death sentence. When it comes to Indigenous Peoples, quite literally. Failure translates into the loss of individuals, families, communities, Nations, ecosystems and the very bio-cultural legacy that Indigenous Peoples maintain–a legacy that took tens of thousands of years to develop.

When I started IC Magazine I hadn’t really come to terms with these points, but I was responding to what I saw as a systemic media crisis.

In 2003 I set out on a journey to learn everything I could about the contemporary struggles of the world’s 6000 Indigenous Peoples and Nations. My work continued until midway through 2004 when I finally decided to take a moment and really look at what was around me.

I drew three conclusions from what I saw. The first was that Indigenous Peoples were being comprehensively ignored by the world’s corporate, independent and grassroots media. For the sake of illustration I’ll note that, on average, there are between 30-60 major events each month that should receive widespread attention and support from the international community. In reality, less than 5 stories a month get that attention and support. Stories like the US DEA gunning down a Miskito family in Honduras as they sat helpless in a boat or, hitting a little closer to home, the forced displacement of Lake St. Martin First Nation (so the City of Winnipeg can spare its citizenry the inconvenience of dealing with future flood waters) are simply drown out.

My second observation was that a great deal of the coverage that existed was generally quite biased and did not adequately relay the needs, rights, interests, opinions or perspectives of the indigenous peoples concerned. One example of this can be found in the Havasupai’s struggle to stop a Canadian mining company from re-starting an old uranium mine near a Havasupai sacred site in the Grand Canyon area. If we were to sift through all existing articles pertaining to this struggle we would find that the Havasupai are almost never mentioned, not even by name. Instead of speaking to the Havasupai, journalists will approach one of the environmental NGOs that are also involved in the struggle to stop the mine. More often than not, the representatives of those NGOs will go to great lengths to put themselves in the best possible light discussing only their own goals, interests and opinions. If we’re lucky, the Havasupai will be mentioned in passing. Without any context, the interviewee will briefly note that there are some “Native American Rights” concerns. The problem with this is self-explanatory. If no one knows about the Havasupai, if no one can even be bothered to say their name, they effectively don’t exist.

My final observation was painfully obvious, since it was the reason I spent more than a year researching. Back in 2004, there weren’t any online resources where we could learn about the struggles of the world’s Indigenous Peoples. If you wanted to know what was going on with, the Mapuche, the Maasai, the Mi’kMaq, the Awajun and Wampis, the Nasa and the Penan, you either had to know them; know someone who knew them; or, in the very least, you had to spend an enormous amount of time sifting through the internet. I was fortunate because I had the time to do that. Most people don’t.

It took me all of five minutes to figure out how I could start addressing all this. I just had to look at what I didn’t have and that was resources, money, and support. I did make a few different zines in the late 90s so I considered taking that route here; but as far as good strategy goes, the solution was proportionate to the scale of the problem: a local zine was never going to address this widespread international absence. The best option by far was to create the website that I could never find.

Six years and two crappy computers later, I found myself writing up to four articles day, even skipping meals in order to keep up with everything that was going on. I often joke that running IC is like working two full time jobs, but in all honesty, I was putting in more than 100 hours a week. In fact, by that time I was on the verge of burning out; but rather than let that happen I started looking for more writers to lend a hand.

A year after that, IC had about a dozen casual contributors and one columnist, all of whom were offering coverage that could have been sold to any paying media firm. Rather than make some quick cash though, they gave their work to us. For that level of loyalty, I decided to give a little something back. It also donned on me that if I created a print magazine like Briarpatch or the Dominion, IC could end up with a stable source of funding. About two months later IC had its first print magazine, an annual publication called People Land Truth.

The magazine turned out great as far as I was concerned. Each new issue has out-shined the last. As far as helping IC though, well, we sold less than ten copies of People Land Truth 2012 and 2013. The latest issue is fairing a little better. So far we’ve sold eleven copies. Clearly, we’re still a long ways off from making IC sustainable.

Perhaps this wouldn’t be the case if self-publishing wasn’t prohibitively expensive. Each copy of People Land Truth 2013, for example, cost us $20. With what extremely limited funds we do receive through online donations, we can only afford to print 20 or 30 magazines at a time. It’s a tough sell. And if you happen to be in Brazil or Australia the cost of the magazine doubles because of shipping.

Incidentally, we started a second publication in 2012 called Indigenous Struggles: Dispatches From The Fourth World. Unlike PLT which highlights the best of IC, each issue of this magazine offered a brief introduction to 350-450 individual stories from around the world. I thought it would be a very useful thing to have; especially for someone who thinks there’s only one major dam struggle in the world (when there are in fact dozens); unfortunately, the international community didn’t seem to think so. We only sold three copies of the last issue. Given how much work we put into the magazine, it just wasn’t worth the effort. I personally spent about 700 hours in research, writing, and design.

Discontinuing Indigenous Struggles really hurt; but given that IC is still basically a one-person show I have to manage my time carefully–even more so now that I am about to be financially dependent on IC.

For over a year now, I’ve been trying to create a non profit organization to make sure that I can make ends meet and give IC everything it needs to thrive including a dedicated staff, the means to distribute People and Truth en masse and the resources to send journalists out into the field. Unfortunately, this work is proving to be extremely difficult. Despite the fact that we have more than 30,000 readers we can’t even raise enough money to pay our bills. Nevertheless, I remain hopeful that the international community will come through for IC, so that it can finally cover all the essential stories that so many others ignore.