Canadian media gatekeepers up to their old tricks

Indigenous and minority voices have long been suppressed in Canada’s media landscape. It’s an ironic fact given that Canada has been floating on a cloud of inclusivity since 1971, when the Canadian Government adopted multiculturalism as an official policy, “affirm[ing] the value and dignity of all Canadian citizens regardless of their racial or ethnic origins, their language, or their religious affiliation.”

“All Canadians are guaranteed equality before the law and equality of opportunity regardless of their origins”, reads the government’s website. “Canada’s laws and policies recognize Canada’s diversity by race, cultural heritage, ethnicity, religion, ancestry and place of origin and guarantee to all men and women complete freedom of conscience, of thought, belief, opinion, expression, association and peaceful assembly.” It sounds great doesn’t it? Unfortunately, it just doesn’t reflect the reality of Canada.

For the past 150 years, the Canadian State has been seeping in a brine of white nationalism that permeates Canadian lives so completely that they routinely commit acts of racism and don’t realize it.

Case in point: In the latest issue of Write, The Writers’ Union of Canada’s magazine, Hal Niedzviecki wrote an editorial announcing that he doesn’t believe in “cultural appropriation”, stating that, “Anyone, anywhere, should be encouraged to imagine other peoples, other cultures, other identities.” He then went on to say that, “There should even be an award for doing so — the Appropriation Prize for best book by an author who writes about people who aren’t even remotely like her or him.”

The asinine assertion quickly led to Niedzviecki’s resignation and an apology from the Writers’ Union of Canada.

The story should have ended there, albeit with a frank and open discussion about the actual meaning of cultural appropriation and its impact on Indigenous Peoples as well as the Canadian media’s tendency to marginalize, exploit and make a mockery of Indigenous Peoples with impunity.

Ken Whyte, former editor-in-chief and publisher of Maclean’s, decided to tweet that he would donate $500 to fund an actual “appropriation prize.” 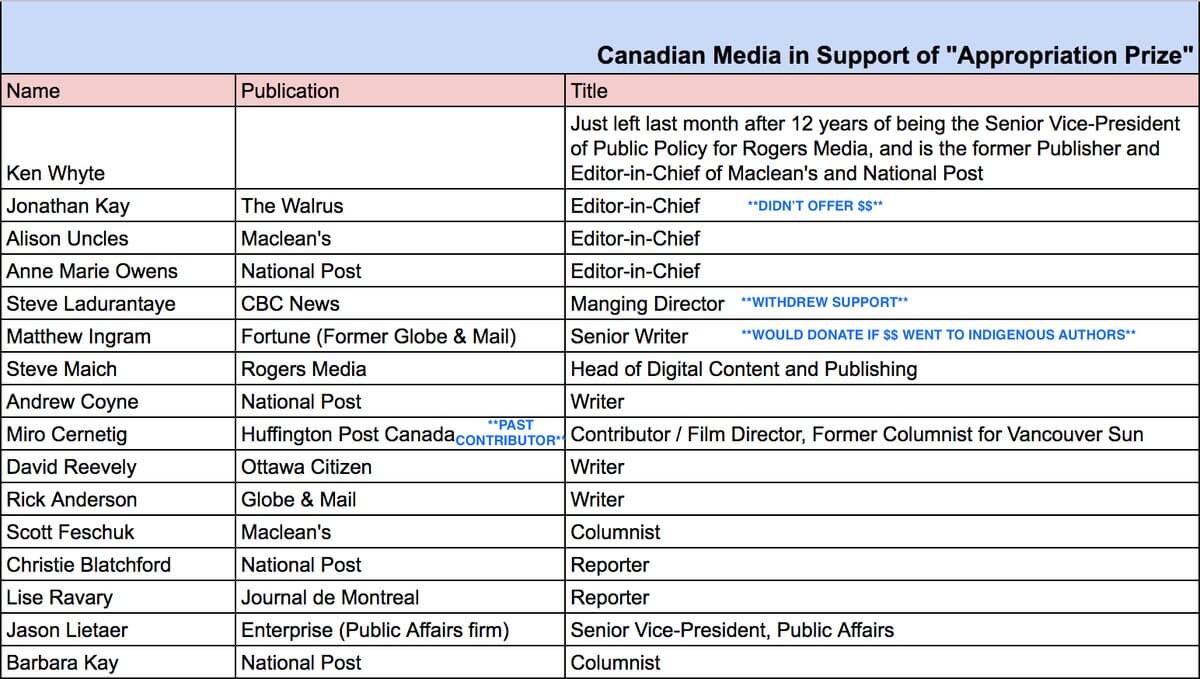 A list of the Canadian media orgs and journalists giving their own money to support a “Cultural Appropriation Prize”, edited to reflect those who’ve withdrawn support and/or written to clarify position. By @culturite

If nothing else, this is a razor sharp reminder of just how far Canadian media has to go before it can reconcile its own history of shirking responsibility toward Indigenous Peoples.

This is about white middle-class journalists, editors and publishers suppressing media diversity by appropriating opportunities for Indigenous and minority journalists. And it’s about ridiculing every Canadian’s right to access reporting that accurately and respectfully represents indigenous opinions, cultures, histories, needs and rights.

It’s also a symptom of a much deeper problem of racism in Canada that is being nurtured in no small part by the way the media continues to portray Indigenous Peoples.

For that reason, I can only hope that this preposterous call for an appropriation prize leads to something more than a few press releases and tweets.

We need more than words. We need a more inclusive and socially responsible standard in media.

We here at Intercontinental Cry are doing our part. For nearly 13 years we’ve been providing Indigenous Peoples with a platform to reach the international community. We’ve covered a lot of ground, both literally and figuratively. And now we’re stepping outside our comfort zone to launch the world’s first online indigenous journalism school, the Ka:nen School of Indigenous Journalism.

It’s going to take a lot more than a humble online school to change Canada’s media landscape, but we are going to move forward just the same. As an organization that was born out of the media’s failure to serve Indigenous Peoples, we really have no choice.

It’s time that we all start stepping forward now with innovative media projects of our own… for the sake of those who are cruelly unaware of their own racism; for those who are being strangled by silence; and yes, even those among us who desperately cling to decrepit white fences.