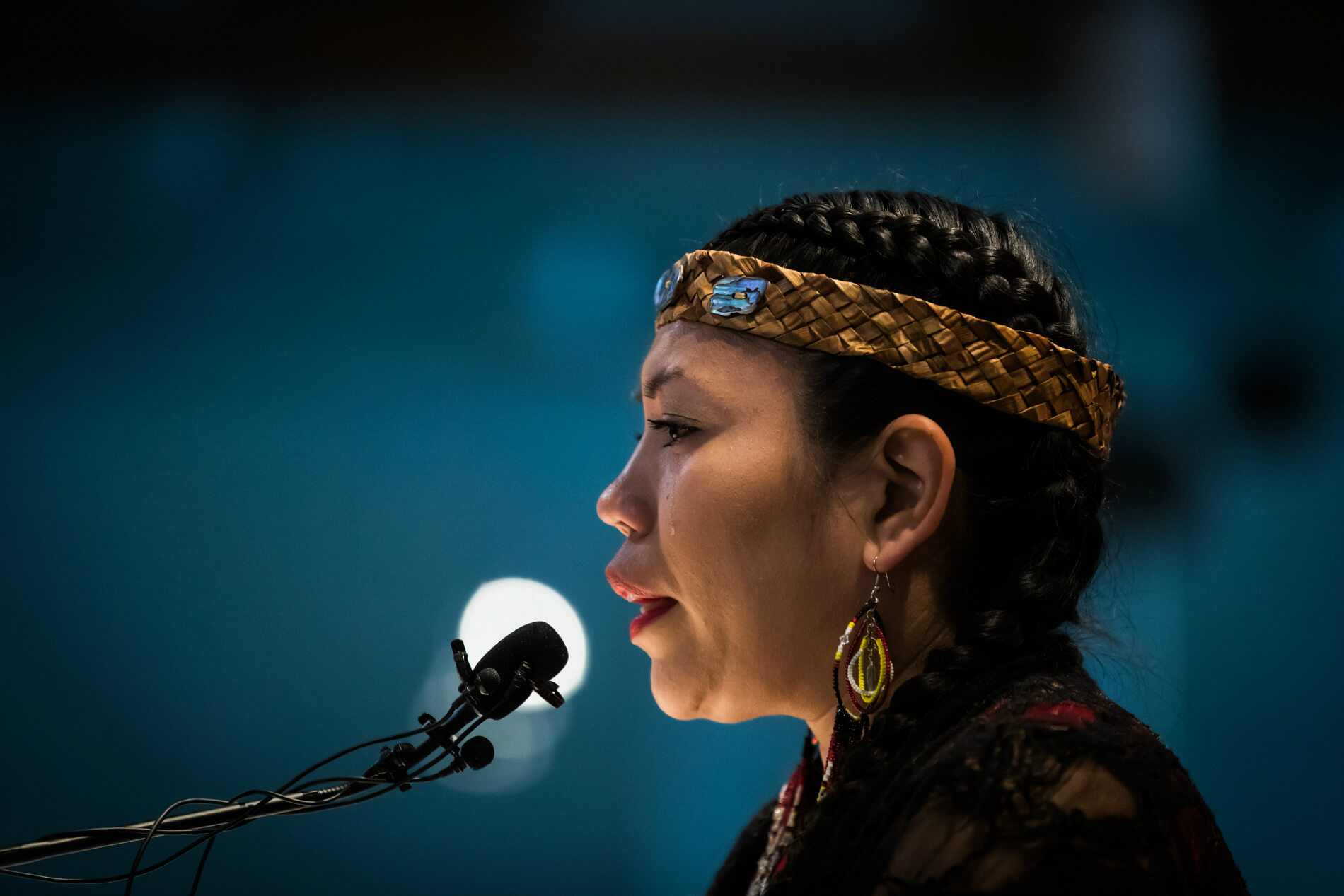 Lorelei Williams, whose cousin was murdered by serial killer Robert Pickton and whose aunt went missing in 1978, sheds tears while responding to the report on the National Inquiry into Missing and Murdered Indigenous Women and Girls. THE CANADIAN PRESS/Darryl Dyck
Support our journalism. Become a Patron!

When the National Inquiry into Missing and Murdered Indigenous Women and Girls released its final report, it described the ongoing violence as a Canadian genocide. In the aftermath of the report’s release, many public intellectuals and journalists in Canadian news outlets and others on social media have contested the use of the term genocide.

I am a genocide scholar who has written widely about settler colonial genocide.

Genocide, originally defined near the end of the Second World War in 1944 by Polish-Jewish lawyer Raphael Lemkin and consequently taken up by sociologists, historians, lawyers and others, is for Lemkin “a co-ordinated plan of different actions aiming at the destruction of essential foundations of the life of national groups, with the aim of annihilating the groups themselves.”

As a sociologist, I’m not interested in adjudicating this case according to an official legal definition of genocide. Rigid legal concepts can interfere with understanding the social nature of group destruction. It can flatten the analysis of group relations. It can serve as a hammer to pound a complicated history into a singular event. 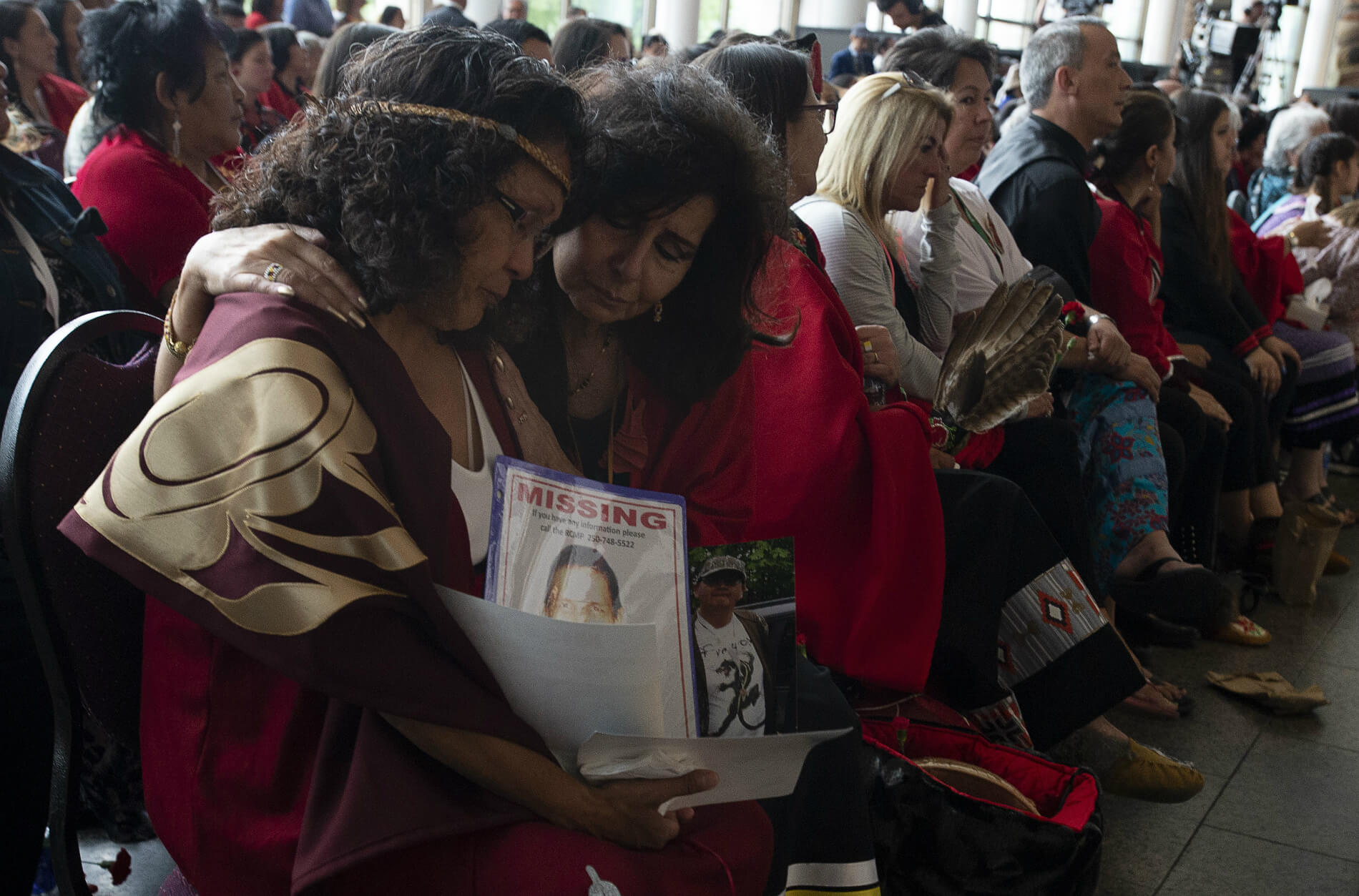 Two women embrace during ceremonies marking the release of the Missing and Murdered Indigenous Women and Girls report in Gatineau on June 3, 2019. THE CANADIAN PRESS/Adrian Wyld

One genocide is never the same as another, and therefore a static law or a fixed concept of genocide is of little use to protect us from its horrors. Understanding genocide as a process can help Canadians grapple with the ongoing threat faced by Indigenous peoples in Canada and Indigenous women and girls as outlined in the final MMIWG report.

Legal professionals over time have had to adjust their reading of genocide law. Since the Second World War, contesting ideas and debate have brought about changes to how legal scholars and courts interpret genocide. The authors of the genocide supplement for the MMIWG report draw upon these interpretations but also pose new challenges to the laws of genocide.

These questions are necessary because the history of settler colonialism in Canada includes a variety of efforts to remove, assimilate, starve and erase Indigenous nations. When one approach failed, the settler colonial mesh recalibrated.

For example, residential schools mutated into child removals and mass incarceration. Moreover, the strands of the mesh continue to entrap and strangle communities long after the supposed end of any one manifestation of group destruction.

This is the destruction to which the report draws our attention.

The 1948 United Nations Convention on the Prevention and Punishment of Genocide (UNGC) is the basis for both international and national laws on genocide. The law is the product of a socio-political moment. In the meetings leading up to the convention on genocide, delegates from colonial nations such as South Africa, Canada, the U.S., Sweden and New Zealand voted against inclusion of cultural genocide (Article III) in the genocide convention.

Quick hint to Canadians, especially journalists and the pundits:

We know being associated with genocide is uncomfortable for you. You have made that plain for a couple hundred years, while allowing the state to try and kill us.

But your discomfort does not eliminate our truth.

Colonial and masculine assumptions are evident in genocide law, as is the political will of the drafting parties to protect their own nations from accusations of genocide, hence the withdrawal of Article III from the final document.

Despite these beginnings, the law develops as people engage with it, and genocide case law has gradually addressed some of the limitations of the UNGC.

For example, through decisions from bodies such as the International Criminal Tribunal for Rwanda, the groups protected from genocide have been expanded beyond narrow understandings of ethnicity, nationhood, religion and race.

As well, the social death caused by mass rape has been interpreted as genocidal.

The MMIWG final report seeks to bring a grassroots, gendered and Indigenous reading of these laws to the discussion of MMIWG and how Canada’s actions and omissions contributed to their deaths.

This is a valuable contribution and pushes the boundaries of the definition of genocide. Thinking on this topic always needs to be pushed.

Genocide is a transgressive act. It overturns all expectations, violates social norms and continuously mutates to take on new and surprising forms. Different readings and interpretations of genocide are needed to truly confront the many evolving methods of group destruction. 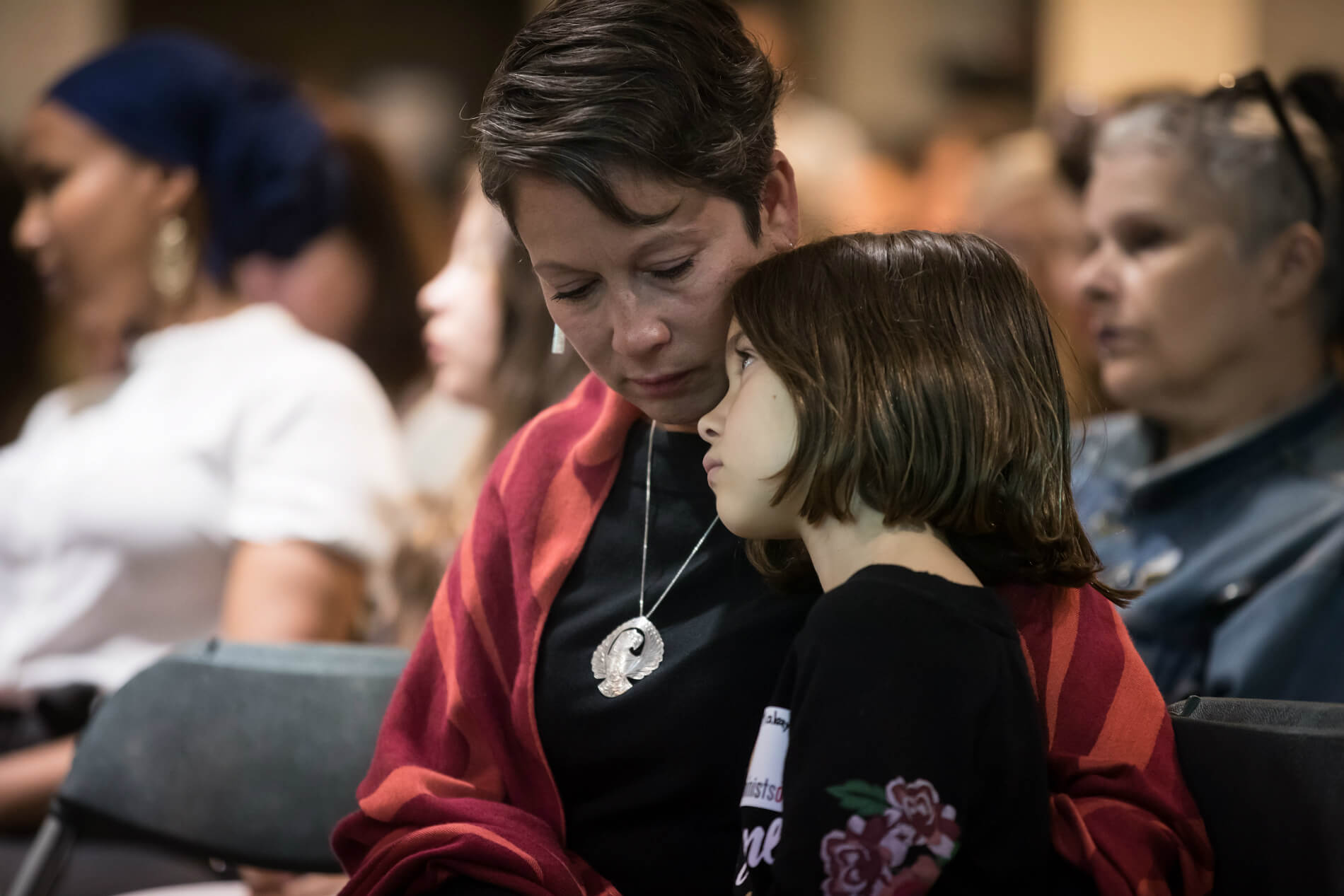 British Columbia Minister of Advanced Education and Skills Training Melanie Mark, B.C.‘s first female First Nations MLA, and her daughter Makayla, 8, listen as Indigenous women and allies respond to the report on the National Inquiry into Missing and Murdered Indigenous Women and Girls, in Vancouver, on June 3, 2019. THE CANADIAN PRESS/Darryl Dyck

Genocide as a process

I chart the development of Indigenous residential and boarding schools in North America and highlight the settler colonial practice of attempting to assimilate children through education.

Residential schools can be seen as situated within a series of nets that operated on all levels in society, including at the upper echelons of society among elite social influencers, and also through government and missionary institutions as well as individual teachers, principals and communities. There was a complex coordination of activities, habits, ideologies, motives and intents that were generally directed toward eliminating Indigenous peoples as distinct peoples.

These layers of destructive action can be likened to a settler colonial mesh constructed to entrap Indigenous peoples within an assimilative project. But the mesh is prone to snags and tears allowing for the emergence of resistance and subversion. Indigenous people were not passive; parents refused to send their children, children ran away and communities sometimes preserved their cultures when conditions allowed.

The MMIWG report is about the results of such processes and their effects on community and family relationships: harmful relations established through settler colonialism, their impact on intimate and everyday group relations and the possibility of better relations in the future.

It demands more of genocide law, and more from Canadian society, to address the intersecting settler colonial and hetero-patriarchal wrongs that have led to the injustice of MMIWG.

Rather than staunchly defend a narrow conception of genocide, it is time to demand this concept to do what it was intended to do: enable human thriving through respectful collective relations.

This article was originally published by our media partner, The Conversation. It has been re-published on IC under a Creative Commons License