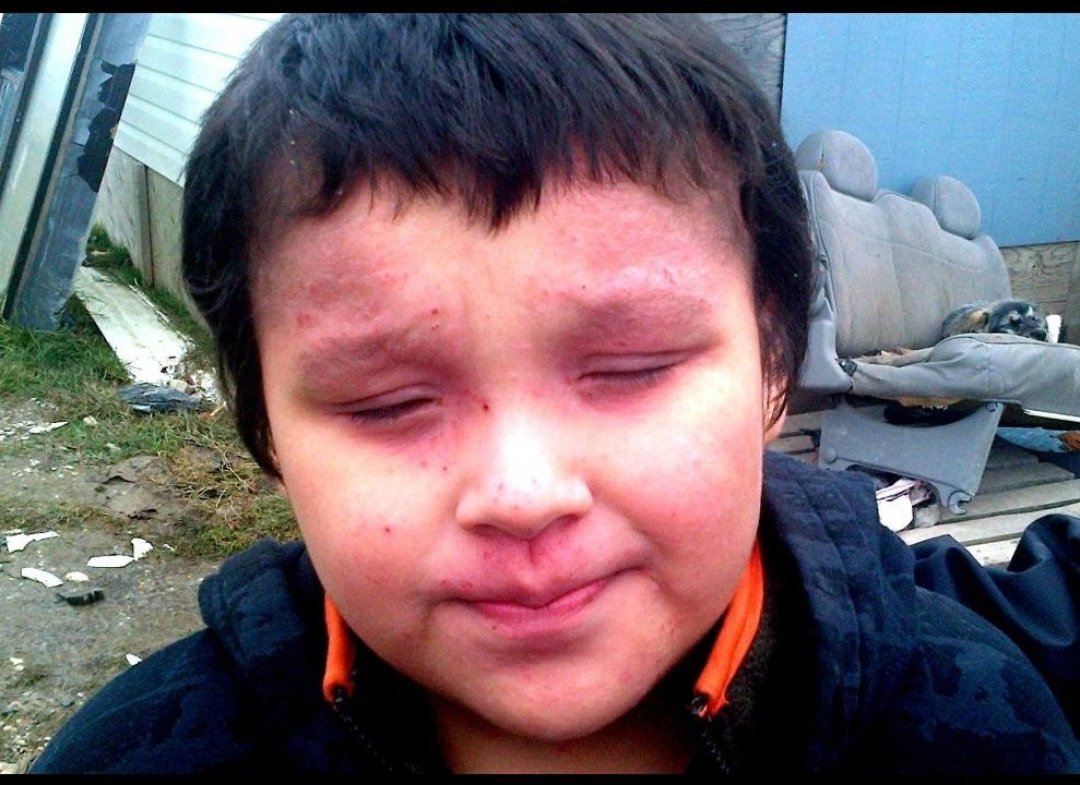 Attawapiskat: A child with a facial rash from lack of clean water and sanitation.
Support our journalism. Become a Patron!

Children living in un-insulated tents; families relying on buckets for toilets; elders living in sheds–these are some of the conditions witnessed by Timmins-James Bay MP Charlie Angus and MPP Gilles Bisson on a tour through Attawapiskat this month.

For almost two years, the Attawapiskat First Nation has been facing a severe housing shortage. As MP Charlie Angus recently witnessed first-hand, there are several families on the reserve who are living in makeshift shelters including uninsulated tents, converted garages, temporary trailers and deteriorating homes filled with Stachybotrys chartarum–a fungi more commonly known as black mold.

Some of the shelters have no heat, electricity, or plumbing of any kind. Some don’t even have toilets, so instead people are using plastic buckets, which they are dumping into nearby ditches. 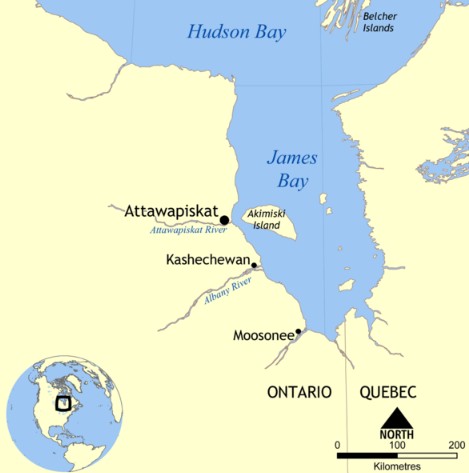 With winter fast approaching, the housing shortage is turning into the kind of crisis that humanitarian aid groups would normally flock to in droves, if it was happening in Haiti or Darfur. But the Cree Fist Nation isn’t in Haiti, it’s in Canada. And Canada is basically doing nothing. In fact, these days the government seems more interested in spying on Cindy Blackstock and shutting down native healing centres than actually helping and working with Indigenous Peoples.

In response to the ongoing crisis, Attawapiskat Chief Theresa Spence recently declared a state of emergency, in which she pleaded for the government to step in and, if necessary, lead an emergency evacuation to ensure everyone’s health and safety. The government said no.

It probably came as no surprise to Chief Spence, given the way Canada has dealt with Attawapiskat in recent years. For instance, in 2009, another state of emergency was declared after INAC finally stepped in to clean up a 30,000 gallon oil spill from the 1970s. The mass of oil had accumulated directly beneath the community’s school grounds.

Some 30 years later, children at the school started getting sick, leaving Attawapiskat with no choice but to abandon the building. INAC responded by providing a new makeshift school a few metres away; but the actual clean up didn’t begin for another nine years.

In 2009, INAC demolished the old school and left an “open wound” at the center of the community, which it covered with a tarp.

Soon after that, community members started complaining of headaches, nausea, skin rashes, nosebleeds and chronic diarrhea. In the makeshift school, some children were said to be just “passing out”.

Canada did nothing. In fact, then-INAC Minster Chuck Strahl even went so far as to say that the whole situation was little more than a publicity stunt being propped up “on the backs of needy aboriginal people.”

This time around, the Canadian government appears to be acting a shade more reasonably, but only a shade. They recently promised to give the First Nation $500,000 to renovate 15 houses; but that’s it. Federal officials haven’t even bothered to visit the community. And who knows how long that will take for that fund to go through; never mind the fact that almost half of the houses on the reserve need renovations or are condemned.

In a frustrating twist, Attawapiskat happens to be in the shadow of the De Beers Victor Diamond Mine, which extracts about 600,000 carats per year.

Attawapiskat is getting an undisclosed amount of money from De Beers; however, Chief Spence says the bulk of that money goes directly into a trust fund which they can’t access for housing. Chief Spence is trying to renegotiate with De Beers, but those negotiations don’t appear to be going anywhere.