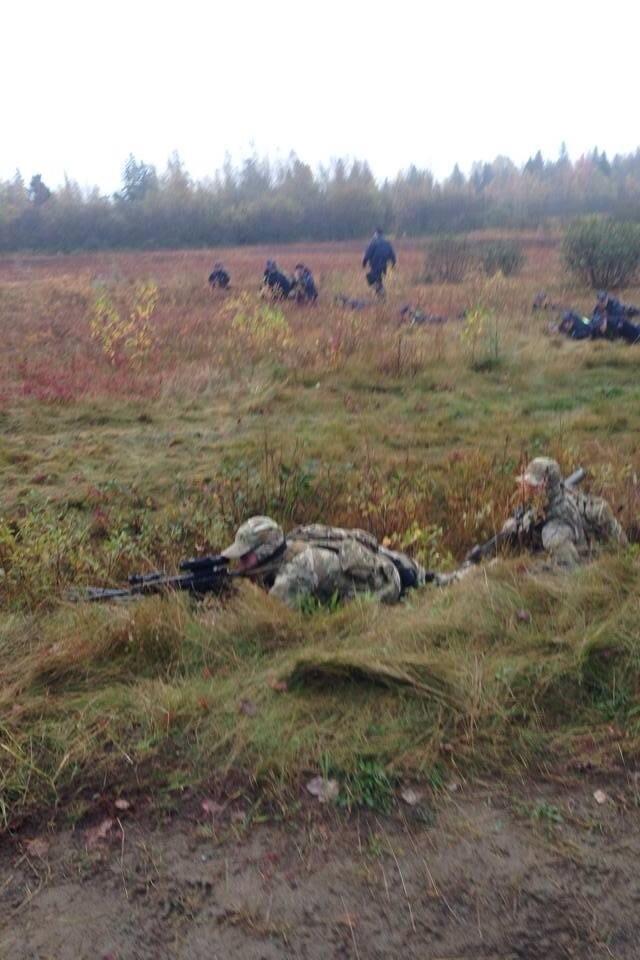 As revealed by a continuous stream of videos and photos on twitter and facebook, The RCMP, –enforcing an injunction that was obtained by SWN Resources Canada–came prepared for a war. In one photo that appeared early in the day, an RCMP Sniper is hiding in a ditch. In a video that was recorded at the time the photo was taken, a woman demands that he stop aiming at her mother who’s off in the distance.

In at least one instance, an RCMP officer attempted to incite a violent response from nearby protesters, saying “The Crown land belongs to the Govt, not the F*cking Natives.”

Despite the heavy presence of children, women and elders, as the day rolled on, the RCMP indiscriminately shot tear gas, plastic bullets, and pepper spray at the protesters, leading to an unknown number of injuries.

The RCMP also blocked medical personnel from entering the area to tend to the injured.

At the time of this writing, the RCMP have arrested more than 40 people, including the Elsipogtog First Nation Chief, several journalists and all members of the Mi’kmaq Warrior Society. They are also enforcing a media blackout, preventing reporters from gaining access to the area and documenting possible human rights abuses.

Some protesters responded in kind. Earlier in the morning, “Molotov cocktails were thrown from the woods […] in defense of the land and peoples. The RCMP, some with long rifles, entered the woods. Shots were fired, and screaming was heard.” reports EF! Newswire. Later on, a total of Six RCMP vehicles were set ablaze.

The RCMP raid is widely being considered a preemptive action to prevent the October 18 day of action that was issued 5 days ago by the Mik’maq Warriors Society.

In the call to action, Suzane Patles, an Ilnu woman and member of the Mi’kmaq Warrior Society calls for physical support at the blockade, solidarity actions across Turtle Island on Oct. 18th and a flooding of Kanadian official representatives’ phone and mail lines in protest of the court injunction that the RCMP enforced today.

Numerous solidarity actions are also being organized across Canada and the United States: