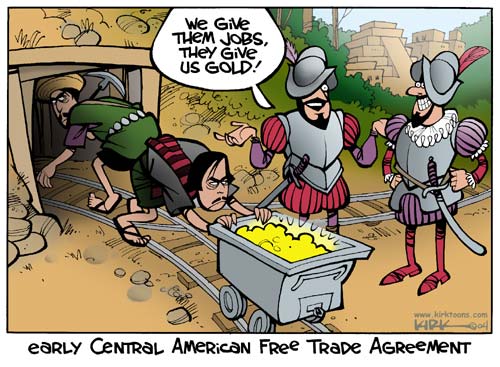 The court said that the law – which included provisions on biodiversity – was improperly passed because the government failed “…to consult the indigenous people, in accordance with Convention 169 of the International Labor Organization.”

Seen as a major victory for opponents to ‘free trade’, the government may now miss its Oct. 1 deadline to pass all the reforms needed to enter CAFTA.

“Following the ruling, the government issued a statement expressing concerns that Costa Rica might not make it to CAFTA, ratified here in referendum last October,” reports the Tico Times.

“The government is ‘greatly concerned about the impact of this ruling, in particular because of the issue of deadlines that Costa Rica has committed to,’ said a communique cosigned by the Presidency Ministry and the Foreign Trade Ministry, according to newswire EFE.”

“The government ‘will do everything possible and within its reach so that this doesn’t affect the ultimate incorporation of Costa Rica into CAFTA,’ the statement said.” However, its doubtful they’ll be able to pass a revamped version of the bill in time.

The victory will be short lived in any case. CAFTA, which essentially gives US corporations a high level of rights to operate in Central America, has already been ratified by El Salvador, Guatemala, Honduras and Nicaragua. It’s only a matter of time before Costa Rica manages to get in on the action.