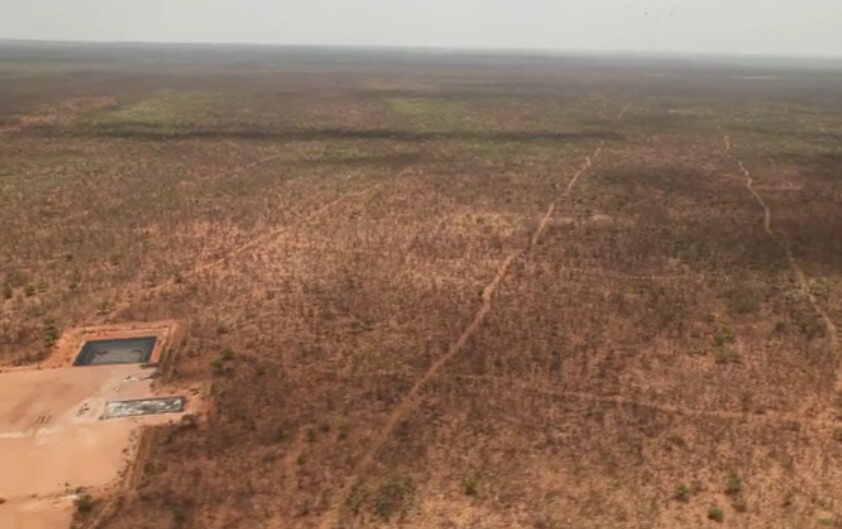 The Australian oil and gas exploration and production company Buru Energy is almost finished establishing a huge network of seismic lines and test fracking wells on Yawuru lands in the Canning Basin of Western Australia.

However, despite putting so much time and effort into its Laurel Formation Tight Gas Pilot Exploration Program, which gained official approval from Western Australia’s Department of Mines and Petroleum (DMP) in June of this year, the company has a problem.

As Yawuru man Micklo Corpus commented in a recent video interview, all of Buru Energy’s hard work was carried out in fundamental breach of the Yawuru’ rights because the company failed to properly consult or gain the Free, Prior and Informed Consent (FPIC) of the Yawuru Peoples.

Prior to gaining the DMP’s approval, Buru Energy was taking part in some notable discussions with the Yawuru community.

As detailed by the Yawuru Native Title Holders Aboriginal Corporation–the registered Native Title Prescribed Body Corporate (PBC) for the Yawuru native title holders–the Yawurua had established as part of those discussions “A rigorous information and review process to assist the Yawuru community in making an informed decision about their position on the proposed fracking. This process [was] underpinned by the United Nations Declaration on the Rights of Indigenous People’s principle of free, prior and informed consent.”

1. Urging the WA Government and the Environmental Protection Authority to assess the 2014 Yulleroo program to the highest possible standards;

3. Constructively engaging with Buru Energy to ensure Yawuru had access to all relevant information held by the company and maximizing Yawuru influence in the development of the Environment Plan;

4. Keeping the Yawuru community informed of the process and seeking feedback from the community along the way;

5. Contracting an expert to produce maps that show Yawuru cultural and ecological values as a tool for explaining the potential impacts of Buru Energy’s proposed Yulleroo program.

The Yawuru process looked very promising. It even gained a round of applause from the Native Title Tribunal.

But then the DMP issued its approval.

After the approval came down, the Yawuru Native Title Holders Aboriginal Corporation came together to define their position on Buru Energy’s project based on everything they had learned in previous months. At the end of that July 18th meeting, a 96 percent majority of Yawuru members resolved:

Yawuru does not agree to the 2014/2015 fracking at Yulleroo, but if Buru Energy goes ahead with the fracking, Buru Energy must agree to meet environmental, cultural, social and economic conditions set by Yawuru. 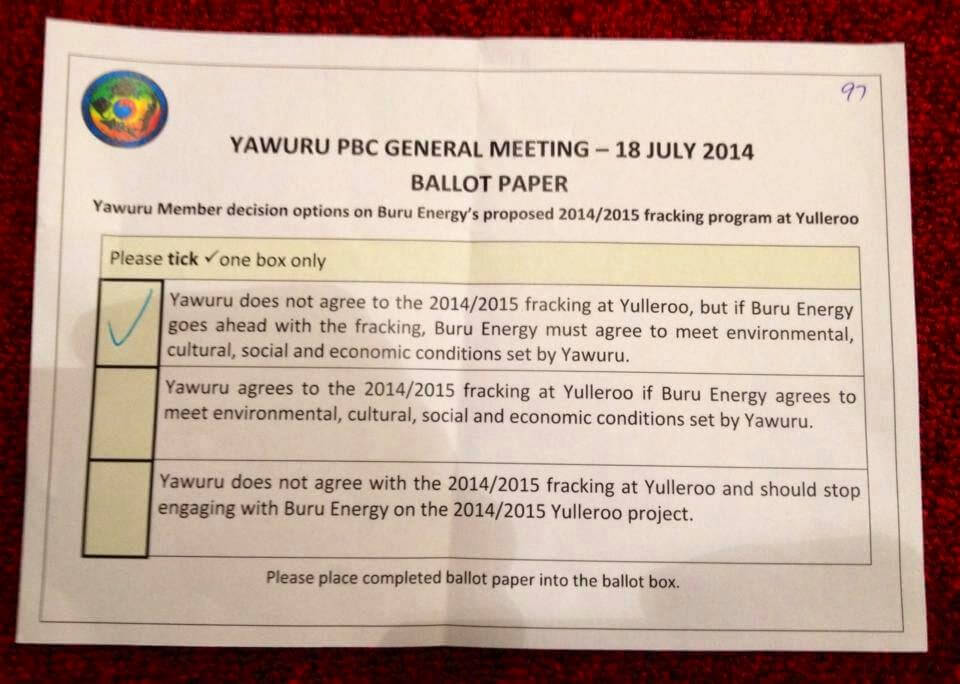 Instead of acting in good faith, Buru Energy chose to walk an all-too-familiar path by exercising its legal prerogatives under the Native Title Act of 1993. Under the NTA, the Yawuru Peoples lost the right to negotiate and/or veto Buru Energy’s proposed activities the moment that DMP issued its approval.

In addition to violating the Yawuru’s rights, Robin Chapple MLC, Greens Member for the Mining and Pastoral Region, points to Buru Energy’s environmental impact in the region. Of particular concern is the frequency with which dingos, reptiles, birds and other animals are being trapped in the company’s open-pit tailings dams.

“These tailings dams contain a toxic mixture of chemicals from the fracking process and also often include heavy metal traces and hydrocarbons drawn up from deep underground as a part of fluid recovery,” comments Mr. Chapple. “They are clearly not addressing the reality that native animals will see these ponds and assume they are a safe water source.”

Mr. Chapple went on to suggest that Buru’s fracking operations should be halted immediately until a ‘proper and thorough environmental assessment’ of the company’s activities has been conducted.

“Buru energy have proven time and again that they are not fit to manage, nor have they properly assessed, the potential environmental impacts of this invasive mining process,” he said.

“Until such time as they can guarantee that precious groundwater reserves won’t be contaminated, local ecosystems won’t be affected and native fauna won’t continue to die horrible deaths in their toxic ponds then they should not be allowed to continue operations.”

Despite the obvious environmental impacts, the company recently asserted that it is conducting itself in an environmentally and culturally sensitive manner.

Regardless of such assertions, the Yawuru Traditional Owners are continuing to seek their Native Title rights, calling for Buru Energy to decommission its four wells at Yulleroo, remove its toxic wastes, fill in the “open animal death pits”, and “leave Country”.