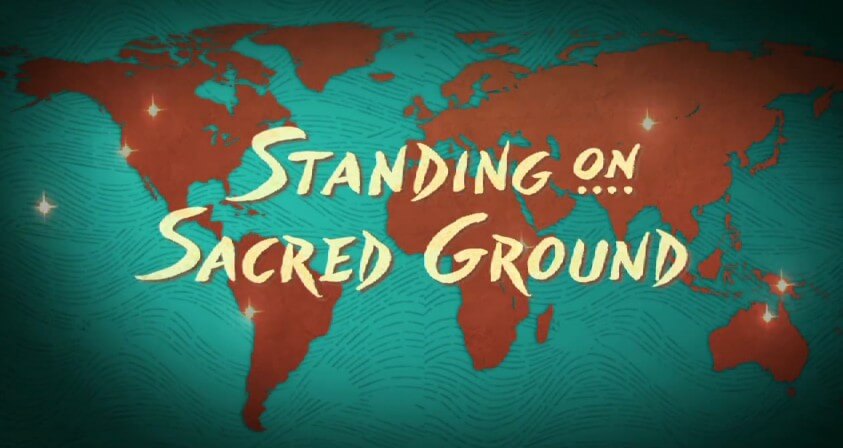 Debuts on The WORLD Channel Beginning Sunday, May 17 at 9:00 PM (ET)
Support our journalism. Become a Patron!

Berkeley, CA (Monday May 11, 2015): Standing on Sacred Ground, a four-part documentary series, eight years in the making, on Indigenous struggles over sacred sites, will enjoys its broadcast premiere nationally on The PBS WORLD Channel, this Sunday, May 17 at 9pm ET, with the next three episodes running on Sundays, May 24, May 31 and June 14, 2015. In addition, public television stations across the country are broadcasting the series via the National Educational Telecommunications Association (NETA), as part of May’s Asian-Pacific American Heritage Month (check local listings).

Standing on Sacred Ground, produced by the Berkeley, California-based Sacred Land Film Project, shares stories from eight Indigenous communities around the globe who are the protectors of sacred places, as part of a growing movement to defend human rights, protect culture and restore the environment. In the series, Native people share ecological wisdom and spiritual reverence while battling government megaprojects, consumer culture, competing religions, resource extraction and climate change.

In episode one, Pilgrims and Tourists, Indigenous shamans of the Altai Republic of Russia and northern California’s Winnemem Wintu Tribe find common ground protecting their sacred mountains from major government projects: Shasta Dam and the Gazprom pipeline. In episode two, Profit and Loss, from Papua New Guinea to the tar sands of Alberta, Canada, Native people work to protect their ancestral land, life-giving water and community health from international mining and oil corporations. In episode three, Fire and Ice, from the Gamo Highlands of Ethiopia to the Andes of Peru, Indigenous communities protect their sacred lands from development, competing religions and climate change. In the final episode Islands of Sanctuary, Native Hawaiians and Aboriginal Australians resist threats to their sacred places. In Australia’s Northern Territory, Aboriginal clans maintain Indigenous Protected Areas and resist the destructive effects of a mining boom. In Hawai`i, indigenous ecological and spiritual practices are used to restore the sacred island of Kaho`olawe after 50 years of military use as a bombing range.

“Public television viewers will now have the opportunity to access global perspectives from a chorus of Indigenous voices defending against attacks on their resources, and on the future we share,” said producer and director, Christopher “Toby” McLeod. “We are proud to partner with The WORLD Channel, NETA, Vision Maker Media and Pacific Islanders in Communications (PIC), who are constantly striving to provide public television stations with diverse, enlightening programming for their audiences.”

“We know having these films available to public television stations in May, timed with Asian-Pacific American Heritage Month, will allow local stations to provide their viewers with important content that focuses on the issues facing many Native cultures in their areas,” notes Leanne K. Ferrer, Executive Director of Pacific Islanders in Communications (PIC). “We also understand some stations may choose to hold some Standing on Sacred Ground to air in November during Native American Heritage Month.”

The film series has screened to great acclaim around the world since its release at the Mill Valley Film Festival in October 2013. It received the Best Documentary Feature Award at the Native American Film Festival 2013 and director Toby McLeod received the John de Graaf Environmental Filmmaking Award at the Wild & Scenic Film Festival 2014. The Smithsonian National Museum of the American Indian screened the series last year as part of the U.S. Environmental Film Festival, and the films were featured at the World Parks Congress in Sydney, Australia, last November. The films have also been screening in the Altai Republic, Moscow, Peru and Papua New Guinea.

The series concludes with the story of Kahoʻolawe in Hawaiʻi, which features the Protect Kahoʻolawe ʻOhana, the activist group that won the island back from the U.S. Navy after 50 years of bombing. Luana Busby-Neff, a founding member of the ʻOhana, says, “The broadcast of the Kahoʻolawe segment is timely, in light of the islands-wide and international focus on protecting the sacred mountain of Mauna Kea,” where 31 people were arrested in recent weeks protesting the Thirty Meter Telescope. “The Kahoʻolawe movement awakened my generation’s ancestral knowledge of and kuleana (responsibility) for sacred places through advocating Aloha ʻĀina (love for the land). Kahoʻolawe is sacred to Kanaloa, the Hawaiian god of the ocean and Mauna A Wākea is the sacred offspring of Wākea (sky father) and Papa (earth mother). The series as a whole shows that we are part of a global movement of Indigenous peoples protecting sacred places to sustain the health of our natural world.”

In addition to the WORLD Channel premiere in May, NETA has distributed Standing on Sacred Ground to the full public broadcasting system for May 2015. To find out more about the series, visit www.StandingOnSacredGround.org.