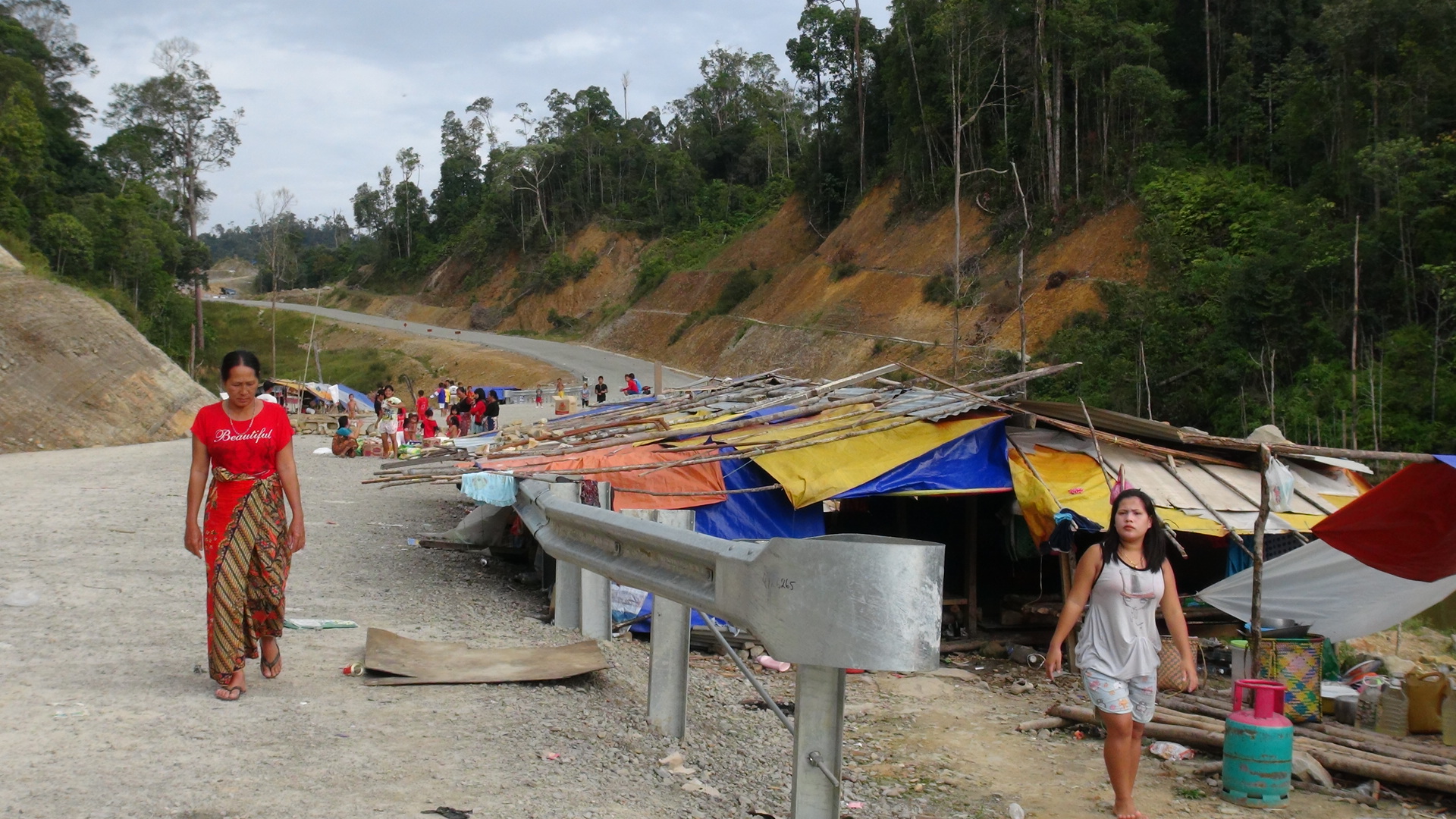 Bribed & Blackmailed! The Real Story Behind The Ending Of The 77 Day Murum Blockade

77 days living by the roadside had worn down the families
Support our journalism. Become a Patron!

Just days after the Chief Minister announced in the State Parliament that he would “not pay a sen more” to the Penan of Murum we can reveal how Sarawak Energy officials BRIBED the blockading families to give up their protests!

At the same time they BLACKMAILED them with threats that they were going to cut off the road bridges leading to their former homes, which would have denied them the chance to move their belongings before the waters flooded over them.

In an exclusive interview with Radio Free Sarawak, two of the Penan protestors admitted that they had finally agreed to give up their roadside protest on Sunday [Dec 1], after SEB officials arrived at the site and promised RM23,000 per family as total cash in hand, once they had moved to the barely built Metalung resettlement area.

Speaking on [the] show, they told the station that they knew it was a miserable amount (they had asked for RM500,000) but they were desperate and exhausted after 77 days of protesting in the open air and their villages were about to be flooded by the rising waters.

The Penan say they are continuing their legal action to get a fairer settlement supported by the native rights lawyer Abu Sui.

The show’s producers say the Penan explained that the first move had come after protestors, who had been arrested by the police for taking part in the blockade, made a court appearance to face charges of trespass (on their own ancient territories):

“On the 20th of November, after the court hearing in Belaga, officials from SEB approached the Penans and threatened them that three bridges will be demolished if the did not end their blockade. The bridges named by SEB were Sungai Peleiran Bridge, Sungai Lua Bridge and Sungai Pelutan Bridge. These bridges are the only forms of access for the Penans to their longhouses. SEB officials did not mince their words; they told the Penans that they have only one option – to end the blockade or to have the logging companies Samling and Shin Yang destroy the bridges.  Meanwhile, the waters at Long Lua have risen and this is frightening the families of the Penans still staying at Long Luar. [Radio Free Sarawak (RFS) producer – following an exclusive interview with Penan activists]“

In their next move, according to the Penan, Sarawak Energy (SEB) resorted to bribery with a miserable cash in hand offer of RM7,500 per family over the RM15,000 handed out earlier.

The only merit of the extra pay out is that it is more than the zero amount that the Chief Minister had earlier thundered they would get in the DUN Assembly.

Again, according to the Penan, this cash offer was mixed with official intimidation, through the presence of armed police officers, who accompanied the SEB personnel:

“On Friday the 29th of November around mid-day, the General Manager of Sarawak Energy Berhad (SEB) Johari Atok and the Sarawak Energy Berhad (SEB) resettlement officer Bit Surang, accompanied by about 20 police officers led by DSP Bakar Sebau, Chief of Police of Belaga, and several Government officials led by the D.O. of Belaga, Abdul Halim bin Abdullah, visited the blockade site and ‘negotiated’ with the Penans to go back to their villages to remove their belongings from their old longhouses to the new resettlement built by SEB in Mentalun. The presence of the police and the government officials was clearly meant to intimidate the protesters who felt threatened and so complied with the ‘negotiations’.” [RFS Producer]

The ‘agreement’ reached was that if the families agreed to move their things immediately from their old homes to the newly built resettlement, which is dusty and incomplete (of which more below) they could have the extra cash later, when their keys were handed to them for their replacement lodgings.

“On the following day, Saturday the 30th of November, at around midday, the same group of SEB officials, police and government officers went to Mentalun with five unknown media persons (one of Indian ethnicity, one of Kayan ethnicity from the Upper Baram and three of Chinese ethnicity) carrying photographic equipment. They brought with them bags of cash and as agreed, handed over RM22,500 in cash, without any form of formal agreement or paperwork, to each family. Some families received their keys while others did not. Those who did not receive their keys refused to accept the money. SEB returned later in the evening at around 8pm with the keys and the cash.

“Their community leader, Lian Buek, from Long Menapa, and their longhouse chief Madai Salu, who were present at the negotiations on Friday, however, were not present on Saturday. These two leaders refused to accept the ‘resettlement allowance’ as they had earlier requested for RM500,000 per family, and not the meagre RM22,500 which SEB offered. SEB said that the RM500,000 was still under consideration. The Penans then responded by saying that if the amount was not paid, they would resume their blockade.”

Under these shocking terms therefore the Penan were finally ‘resettled’ to the location provided in an abandoned Shin Yang palm plantation by the State Government. 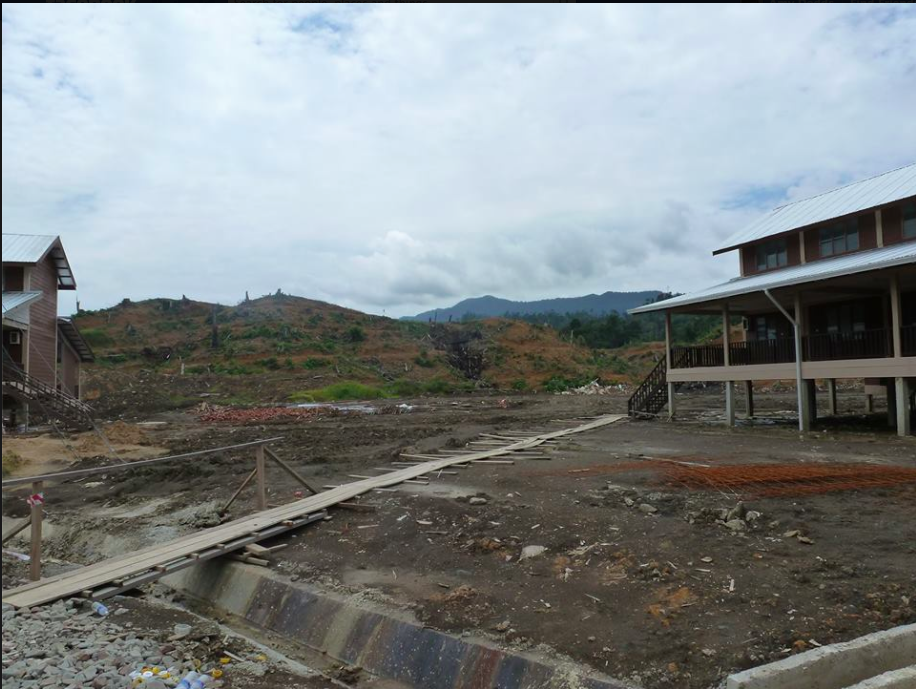 The Penan have confirmed to the RFS team that there was nothing put in writing at any stage and this appears also to relate to any compensation agreement.

At no point has the State Government appointed legal or any other assistance to provide representation for the interests of the Penan in any of these ‘negotiations’.

The vague commitment to ‘consider’ the compensation request of RM500,000 (which is the rough price of a semi-detached house in Kuching built by the Taib family company CMS on land appropriated for free from the state of Sarawak) remains no more than verbal.

PR Team instead of real reporters

Meanwhile, the photographers reported by the Penan have clearly got to work. The next day the Borneo Post carried an article with no by line, indicating it was merely a company press release with photographs issued by SEB.  It was full of optimism and praise for SEB over the resettlement.

Indeed, all the actual journalists in the country were detained far away in Kuching, enjoying a large and fancy media reception hosted by none other than SEB!

So, having spent so much of the public’s money on buttering up the gentlemen of the press, the state owned company can doubtless look forward to much more positive and unquestioning media coverage, provided by their own five man PR team, of course, while Sarawak’s entire journalist population recovers from their hangovers!

Await the pictures and gushing prose about the planned weekend SEB ‘party for the Penan’ in the Borneo Post courtesy of ‘their own correspondent’!

Meanwhile, SEB should perhaps recognise that it is impolite to impose their PR team on the homes and lives of the Penan, without even so much asking permission, in order to make their expensive and self-serving PR.  It is also dishonest.

And, if SEB handed out their much vaunted prize for the ‘best coverage’ of their resettlement programme last night, Sarawak Report would be most interested to know by any chance if we won it or whether it went to the ‘objective’ articles provided  by, for example, the Borneo Post?

The ‘article’ in the Borneo Post, also referred to the Penan’s apparent good fortune in now possessing:

In fact, the Penan, who spoke to Radio Free Sarawak pointed out that the only water they have available in their new premises in Metalung is rain water captured in butts!

There are so far no schools, no clinics, no chapel, no kindergarten and the Penan have been complaining they are being told that the supposed RM850 will largely be given in kind (rice and oil), even though it is a below poverty line settlement and only for 4 years.

Even electricity supplies are intermittent to the sites, only available a few hours a day.  How much better off were these people next to a fresh river where they could wash and fish as well as take clear water?

One Penan woman was quoted saying they had been promised the schools and clinic before the end of the year.  With the end of the year just 3 weeks away this looks set to be yet another broken promise by the Sarawak State Government to the native people of the state!

SEB should not ‘play Santa’ in place of due process

There will be more ‘handouts’ to the Penan as SEB tries to repair its tattered image in Murum.

However, such tactics only bring further into question the reputation of its Norwegian Chief Executive.  How can cash bungs and impromptu parties replace a proper planned compensation process?

Torstein Dale Sjotveit rushed into print last week declaring his innocence after questions were raised in the Norwegian newspaper Ny Tid about his handing of contracts to the Taib family and forcing natives from their homelands:

“We follow internationally recognized principles for procurement and tendering processes. We use, without exception, competetive tenders and awarding contracts to the company attractive offering the best value for Sarawak Energy…We have evicted some natives. We are starting with the relocation of about 1,500 Penan in 7 villages in Murum project. Three of the villages have already moved and the last four are planned moved during the coming months. Anyone who has moved are of course doing this voluntarily and no coercion has been used . I guess most of the remaining families will move as soon as they get the go-ahead to it.”[translation]

Does Mr Sjotveit think that people back in Norway will consider his mix of blackmail and bribery and his misrepresentation of the facts as practice ‘of the highest standard’?