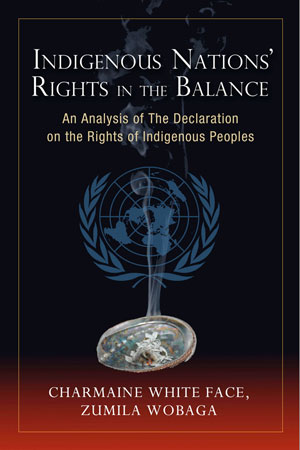 Breaking down the UN Declaration on the Rights of Indigenous Peoples

The UN Declaration on the Rights of Indigenous Peoples, or UNDRIP, is routinely cited by activists, academics and non-governmental organizations as a universal framework of minimum standards for the survival, dignity, well-being and rights of the world’s indigenous peoples.

The UN General Assembly, in adopting the declaration on Sept 17, 2007, referred to it as a “major step forward towards the promotion and protection of human rights and fundamental freedoms for all”.

Such claims are in desperate need of revision, much like the UN Declaration itself.

In the pages of Indigenous Nations’ Rights in the Balance, Charmaine White Face, an Oglala Tituwan woman, grandmother, writer and activist from Pine Ridge Reservation, provides a well-researched analysis of three different versions of the Declaration that culminated in the final version that was famously passed after a General Assembly vote of 143 in favor to 4 against, with 11 abstentions.

Acting in her capacity as the official spokesperson for the Sioux Nation Treaty Council who participated in the process to develop a sound declaration for all Indigenous Peoples, Charmaine White Face also offers her own insights about the differences between each declaration, commenting on each change and their ultimate effect on the meaning and integrity of the document.

For instance, White Face explains that, in the first official draft of the Declaration (sometimes called the Sub-Commission text) which was approved by Indigenous Peoples and passed by the UN Working Group on Indigenous Populations and the UN Sub-Commission on the Prevention of Discrimination and the Protection of Minorities in 1994, Preambular Paragraph 12 stated,

Recognizing also that indigenous peoples have the right freely to determine their relationships with States in a spirit of coexistence, mutual benefit and full respect.

The statement is straightforward enough. Given that we’re talking about a Declaration of Rights, there should be a provision identifying The Right of Indigenous Peoples to determine their relationship with a State, as opposed to having it forced upon them by the State.

In the second draft of UNDRIP, written by chairperson Luis Enrique Chavez of the Working Group on the Draft Declaration (WGDD) and passed by the UN Human Rights Council in 2006 (by a vote of 30 in favour and 2 against with 12 abstentions) the paragraph in question remained.

In the third and final draft of the declaration, the paragraph was removed. Charmaine White Face comments,

Another change reveals the essential role of the document not as a formal “Declaration of Rights” but as merely a “standard of achievement.”

The final preambular paragraph in the Sub-Commission text states that:

“Solemnly proclaims the following United Nations Declaration on the Rights of Indigenous Peoples”.

This paragraph was changed in the Human Rights Council Version and kept in the General Assembly version as:

“Solemnly proclaims the following United Nations Declaration on the Rights of Indigenous Peoples as a standard of achievement to be pursued in a spirit of partnership and mutual respect“.

As one final example–among the dozens of other changes that White Face reviews in her book– Article 6 of the original, Sub-Commission text states that:

“Indigenous peoples have the collective right to live in freedom, peace and security as distinct peoples and to full guarantees against genocide or any other act of violence, including the removal of indigenous children from their families and communities under any pretext. In addition, they have the individual rights to life, physical and mental integrity, liberty and security of person.”

“Indigenous individuals have the rights to life, physical and mental integrity, liberty and security of person. Indigenous peoples have the collective right to live in freedom, peace and security as distinct peoples and shall not be subjected to any act of genocide or any other act of violence, including forcibly removing children of the group to another group.”

“1. Indigenous Individuals have the rights to life, physical and mental integrity, liberty and security of person.

“2. Indigenous peoples have the collective right to life in freedom, peace and security as distinct peoples and shall not by subjected to any act of genocide or any other act of violence, including forcibly removing children of the group to another group.”

To the undiscerning eye, these articulations of a very basic set of rights don’t look at all different from one another. Upon closer inspection, however, White Face reveals the ugly underbelly of the UN Declaration on the Rights of Indigenous Peoples:

“Changing the phrase and to full guarantees against genocide to the phrase shall not be subjected to any act of genocide alters the full meaning of the Article. The Original Text stated that Indigenous Peoples have the right “to full guarantees against genocide.” The HRC and GA versions do not address this right. Rather, the HRC and GA versions state an action that needs to be enforced, but it does not say how it will be enforced. The Article, as it was changed, is written as a law, rather than as a Right.

“Finally”, Charmaine White Face observes, “totally deleting the phrase under any pretext is very ominous, since colonizers devise all sorts of excuses and pretexts to kidnap Indigenous children and place them under non-Indigenous control.”

All in all Indigenous Nations’ Rights in the Balance: An analysis of the Declaration on the Rights of Indigenous Peoples should be considered essential reading for anyone that’s working to defend Indigenous Rights on the international level. Not only does it provide a long-overdue analysis of the UN Declaration, it establishes the need either for a new declaration or the revision of the presently inadequate document and perhaps the addition of a second document specifically for States.