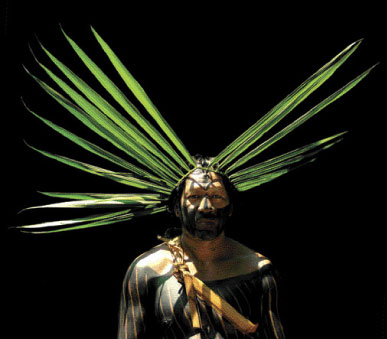 Earlier this month, a leader from the Kayapó delivered a letter to Brazil’s President, expressing a deep concern about a bill currently being debated in the Brazilian parliament which threatens to open up indigenous territories to mining and other development projects.

The letter, signed by 78 People from the Kayapó, Panará, Tapajuna and Yudjá Nations, warns that they will not accept mining on their lands without permission from the community; that they “do not want the entry of miners, miners, loggers, fishermen and any intruders into our territories.”

They also repeated their opposition to the hydroelectric dams the government plans to build on the Xingu river and its tributaries, stating ‘We will not allow the construction of these hydroelectric dams, which would destroy our territories, our natural resources and the lives of our peoples.’

Courtesy of Survival International, you can read the original letter (in Portuguese) here, or see below for a google translated version.

We are very concerned about the future of our peoples.

We want the demarcation of Kapôt Nh?nore this year. For a long time we are fighting for demarcation, because this land is sacred and very important for our people Meb?ngôkre. Every year the fishermen and farmers are invading and destroying our natural resources and sacred sites within the Kapôt Nh?nore.

Furthermore, we know that your government wants to build six hydro power plants in the Xingu River and its tributaries, as in Tepwatinhõngô, what the whites call Jarina. We will not allow the construction of these hydroelectric dams, which would destroy our territories, our natural resources and the lives of our peoples

We want the FUNAI strengthened, receiving and administering all of the resources that exist for the native peoples that are spread in several departments and governmental bodies. We do not accept the estadualização(?) and municipalização(?) of indigenous health and education. Each nation will decide how the funds will be repassed and administered for the care of their communities.

We do not accept the mining on indigenous lands and above without permission of the indigenous community. We do not want the entry of miners, miners, loggers, fishermen and any intruders into our territories.

We want indigenous rights won in the Constitution of 1988 are respected.

President Lula and the Brazilian government needs to respect and protect indigenous peoples.