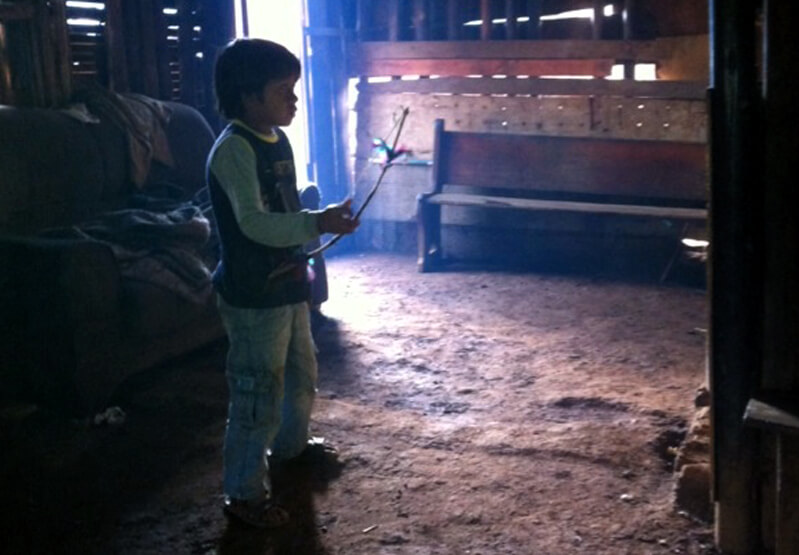 Agribusiness interests in Brazil are facing off against Indigenous Peoples calling for official recognition of territorial claims. During the opening ceremony of the World Cup, a Guarani Indian youth held up a small banner saying, in Portuguese, “Demarcation Now”. Demarcation meaning land recognition. There are over 400 indigenous groups in Brazil waiting for their ancestral lands to be officially recognized but Brazil’s powerful agricultural lobby is pushing for changes that would make it so they never are. Lucia Duncan reports.

Terra Indigena Jaraguá in Sao Paulo is the world’s smallest indigenous reservation – the size of just two soccer fields. Its Guarani residents quickly outgrew the space. They now occupy another plot nearby.

A young man plays the violin inside of the Opâ, a mud and thatched roof building that is the spiritual gathering space for the community. Chief Karai Mirim explains the meaning of symbols on the altar: “This represents land, this is all of our spirit, ambã, that illuminates our struggle and all the knowledge of our ancestors.”

Starting in 1934, Brazilian authorities established small reservations like Jaraguá with the expectation that Indians would assimilate into Brazilian society.

But in 1988, after the end of the dictatorship, Brazil’s new constitution recognized Indigenous Peoples as the original inhabitants of the country – with a right to enough land to continue their culture and way of life.

Daniel Pierri, an anthropologist who works for a Guarani advocacy group, says the lack of farmland has resulted in the loss of cultivation techniques. “Ways of growing corn and cassava that are unique and super important to their culture are being lost,” he says. “This causes problems like child malnutrition and other health problems. All this results from the lack of land.”

Last year, the government’s agency for Indian affairs approved expanding the Jaraguá territory. But Brazil’s Attorney General hasn’t signed off on it. So the Guarani living in the disputed area have been given an eviction notice. “We’re a people without life and we feel it,” says Chief Mirim. “Our kids don’t have a future. We’re at the end of the process, and we’re really worried.”

No new indigenous territories have been recognized under President Dilma Rousseff’s administration. And Brazil’s powerful agricultural lobby wants to pass a constitutional amendment to transfer authority over land demarcation from the agency of Indian affairs to Congress.

Pierri, the anthropologist, compares this to a fox guarding a hen house. “Brazil’s Congress is dominated by large landowners,” he says. “And so there’s a conflict of interest – those who are opposed to expanding indigenous land want to be responsible for regulating it.”

Last year, the Brazilian Congress decided to consider the landowners’ amendment. And there have been public hearings throughout Brazil.

Congressman Luis Carlos Heinze is President of the Congressional Agribusiness Caucus. He spoke to small property owners at an outdoor hearing in his home state in the south of Brazil, stoking fears that their land will be subject to expropriation. Video of the event posted to YouTube went viral after he described the interests advocating for indigenous land recognition as “Indians, descendants of runaway slaves, lesbians, and gays; people that are worth nothing. They are all allies and they control the government.”

Heinze has also encouraged small landowners to arm themselves.

A Global Witness report says the numbers of environmental and land rights activists murdered in Brazil tripled from 2002 to 2012. But Pierri says the threat of violence hasn’t deterred the Guarani: “They’re now making themselves visible to the broader society. After spending a long time opting to hide, living in the woods that were left, avoiding contact, they are now doing the opposite.”

The Guarani of Jaraguá have joined with other Indigenous Peoples throughout the country to protest and organize against both the constitutional amendment and other laws that would open up their lands to development and mining activities. “We thought a lot in the beginning about how to create a movement,” says Chief Mirim, adding that indigenous people in Brazil share the same goals. “To win our land. We want the Brazilian government to recognize us as indigenous peoples, with a different culture. We want respect and recognition.”

In September, the Workers’ Party will hold a Popular Referendum on Political Reform. This is a response to the massive protests in Brazil last June. Changes in campaign finance would be one way to reign in the power of the agricultural lobby, but the referendum is non-binding.