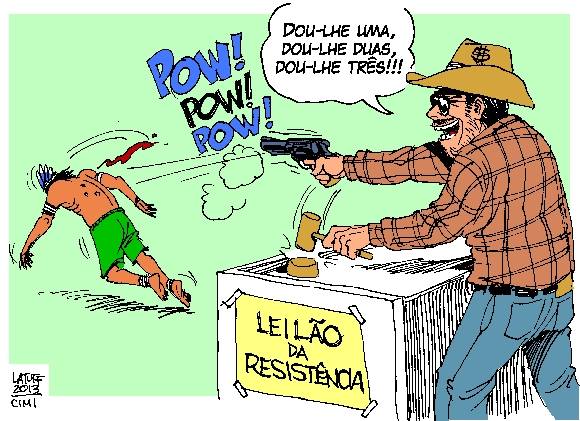 An agricultural auction held by ruralists in the state of Mato Grosso do Sul on December 7, 2013 raised one million Brazilian reals (about 425,000 US dollars) to finance what they refer to as “resistance” to the actions of indigenous peoples occupying their lands and reclaiming their rights in the state.

The auction was suspended by the courts in the beginning of December, but pressure from the ruralist lobby – which managed to remove the judge who made that decision from office by legally questioning her impartiality and independence – soon convinced another judge who was named to take the place of the first judge to revoke the suspension. Only three hours passed in between the suspension of the first judge and the appointment of the replacement judge who announced his decision in the same night. The maneuver was considered illegal by defense attorneys working for indigenous rights, who pointed out that the court should have kept the auction suspended until the order of suspicion of the first judge could be heard and judged in court.

The decision of the first judge argued that “the behavior on the part [of the ranchers] cannot be considered legal, as it is apparent that they intend to replace the State in the solution of an existing conflict between the ruralist class and the indigenous tribes” and that “they have the power to incentivize violence (…) and this collides with the constitutional rights to life, security, and physical integrity.”

The auction consisted of the participation of various politicians, among them mayors, state representatives, and federal representatives. Kátia Abreu, senator, leader of the ruralist group and president of the National Confederation of Agriculture (CNA), said that the purpose of the auction was not to finance a militia to combat and kill the indigenous, as defendants of indigenous rights claimed. The senator, however, did not explain what would be the purpose of the event.

Some of the quotes from politicians participating in the event, along with their euphemistic kind of language, give an idea of the objectives of the ruralists, such as what state representative Zé Teixeira of the right-wing party Democrats (DEM) said:

It has been years now that producers have wasted with the invasions. If the bank has security at the door, why can’t a farm have it too? This auction is a warning to show that the production sector will not wait for public power and needs security.

The situation of indigenous peoples [en] in Mato Grosso do Sul is alarming, a problem that has dragged on for decades, without the Brazilian government providing a solution that guarantees the rights of the indigenous tribes to occupy their own lands, an inalienable right. The constant attacks against the indigenous in the state, whose ethnicity is primarily Guarani Kaiowá, along with the assassination of various leaders and the imposition of the terrible living conditions on this tribe, has provoked waves of protests in Brazil and around the world [en]. One of these assassinations happened recently and gained attention with coverage [en] from the organization Survival International.

The use of social media to spread the word about the indigenous cause and the alarming situation in which many indigenous groups are living occurs not only on the part of NGOs, but also more and more on the part of the indigenous themselves, as analyzed by Raquel Recuero in the article Social Media: Brazil’s Indigenous Tribes Go Online in their Struggle To Be Heard [en].

The lack of political interest from the interest groups that dominate the government seems to be one of the principal motives for which the problem in Mato Grosso do Sul and other regions of Brazil has not been solved, as highlighted by researcher Imazon Paulo Barreto:

The argument about the lack of land is a fallacy, because there are 58.6 million hectares of degraded pasture on farms that could have been used for the resettlement and increase of production outside of indigenous lands. The government would have money available if a solution to these conflicts was considered a priority. For example, it would be enough to eliminate or reduce the 22 billion Brazilian reais [about 9.35 billion US dollars] that are given in annual subsidies to large businesses and eliminate the nearly 70 billion Brazilian reais [about 29.7 billion US dollars] lost yearly to corruption. The delay in judicial decisions slows the process, but even when obtaining a final ruling favorable to the indigenous, there are no guarantees with regards to the time it will take to be executed. For example, the indigenous people of Alto Rio Guamá have been waiting for the demarcation of their lands since 2010.

The Brazilian judiciary have even called indigenous people who fight for their rights guerrillas.

Blogger Camila Pavanelli called attention to the dubious morals of some politicians evident at the auction in a post titled Quebrar vidraça é vandalismo, atirar em índio não (Breaking glass is vandalism, shooting at Indians is not):

For Senator Kátia Abreu, for example, the popular protests against the Forest Code were authoritarian and anti-democratic, and against the presence of the military police at the University of São Paulo.

(…) the auction was organized to “raise money for resources against indigenous occupations.”

The message given by Kátia Abreu and her friends is clear:

Criticizing the government without breaking glass – you can’t do that either, that’s authoritarianism.

Shooting the indigenous – OK, well, that you can do.

Indigenous leaders and unionists opposed to the auction received death threats after the original judge’s decision to put a halt to it.

Even though the Federal Regional Court eventually allowed the auction to be held, it imposed conditions on the the event. The money raised will have to be deposited in a judicial account controlled by the court, and the resources raised can only be used after the court hears the Public Federal Ministry and the indigenous organizations of the region.

We are observing a case of ethnocide. They want to bring back the genocide of the indigenous people. This (the auction of resistance) is the presumption of those that think themselves above the state, the Constitution, and life itself. It is classic patrimonialism. They are treading on the Constitution and on democracy.