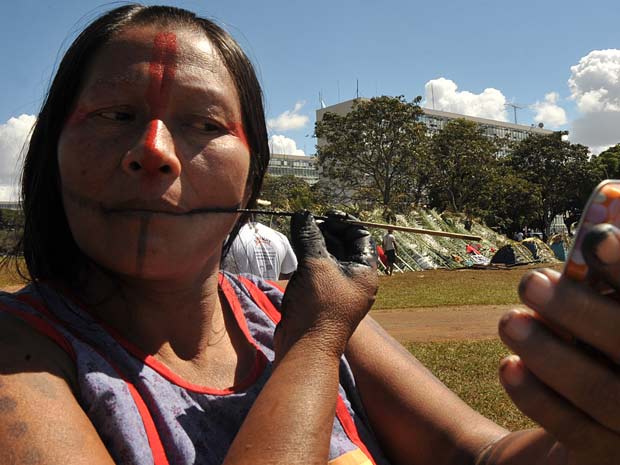 More than 800 indigenous people are gathered in the Free Land Camp 2011, which occurs among the Ministries, in Brasilia (Photo: Elza Fiuza / Apr)
Support our journalism. Become a Patron!

The Free Land Camp, which runs from May 2-5, 2011, has brought together leaders and representatives from at least 70 Indigenous Peoples to discuss the situation of Indigenous rights in Brazil, including the criminalization of leaders, the imposition of projects on traditional lands (like the Belo Monte Dam Complex), and the National Indian Foundation’s (FUNAI’s) inability to protect Indigenous Peoples’ needs and interests.

Once the Camp concludes, the delegates will present a list of demands to the Brazilian government.

In a recent statement (pdf), the Executive secretary of the Indigenous Missionary Council (CIMI), Eden Magalhães, stressed the importance of the ATL as “a unified space for the indigenous movement deeply concerned about the various forms of aggression against the territories of the communities,” stating “We believe that another world is possible with the indigenous peoples.”

The entire event, organized by the Articulation of Indigenous Peoples of Brazil (APIB), is being aired live on the internet: http://www.ustream.tv/channel/atlindigena

In the days leading up to the camp, a group of 69 leaders and representatives came together for three days of intense discussion at the “National Meeting of Indigenous Peoples in Defense of Earth and Life” (Encontro Nacional dos Povos Indígenas em Defesa da Terra e da Vida).

As reported by CIMI, the three-day meeting acted as a survey of the violations of rights being discussed at the camp; “violations of rights of which indigenous people are victims, such as the enterprises of federal, state and municipal governments that impact their lands; the criminalization and imprisonment of numerous leaders engaged in the struggle for recognition of their traditional territories and the morosity of [the] government to identify and demarcate indigenous lands in the country.”

“On the first day of the meeting, Professor Ariovaldo Umbelino, of the University of São Paulo (USP), and sub-prosecutors of the Republic, Drs Deborah Duprat and Rachel Dodge, coordinators of the 6th Chamber and the 2nd Criminal Chamber of the Federal Public Ministry (MPF – office of the federal prosecutor) respectively, contributed with discussions focusing on issues of land and criminalization. On the second day, the groups performed a survey, which notes that some 434 enterprises in the Program for Acceleration of Growth (PAC) impacting 182 indigenous lands, impacting 108 indigenous peoples,” CIMI continues.

They also observed a total of 748 indigenous prisoners across the country; many of whom are in jail as a result of land struggles.

“These and other preliminary data contained in the final document adopted late Sunday morning [see below] and which bears the signature of the 69 peoples who attended the meeting, [reports] in minute detail the reality they live in their communities under the current model of development imposed by the Brazilian government, and the various rights violations to which they are submitted,” adds CIMI.

Among the many points included in that document, the Indigenous Leaders single out “The performance of the Judiciary”; The lack of initiative of the federal government to structure an indigenist policy; the Ministry of Justice’s tendency to “accommodate conflicts rather than seek to resolve them”; and FUNAI’s lax approach when demarcating indigenous lands (especially Guarani Kaiowá lands) as well as their habit of approving “new highways and railways that tear through indigenous lands” and “the planting of GM monocultures of soy, sugar cane, eucalyptus, pine or livestock on lands that are undergoing demarcation.”

In their closing remarks, the document calls for “all indigenous peoples of Brazil to unite against the projects of the federal government and of the state and municipal governments that seek only and exclusively to gain money and power with the destruction of our Mother Earth. Mother who nourishes us, protects and guarantees our life and our future, who are our children and grandchildren.”