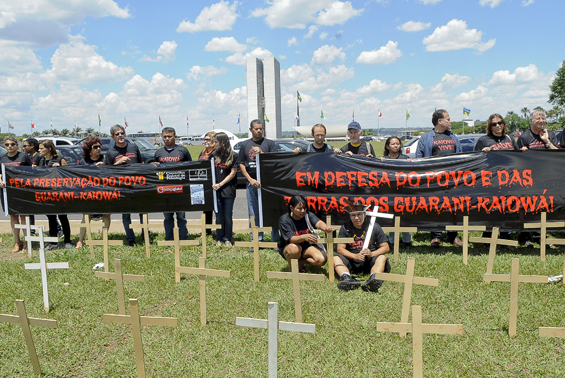 After issuing a statement that both shocked and confused the international community, the Guarani-Kaiowá community from Pyelito Key/Mbarakay can rest easy–at least for now.

A federal judge ruled on Tuesday that the community should be allowed to remain on their ancestral land until a final decision is made on the area’s lawful owner.

Specifically, Judge Cecília Mello of the Regional Federal Tribunal of the 3rd Region stated that the community “can not be evicted from the land that they occupy because those lands are the subject of an administrative process of demarcation.”

The process of demarcating Indigenous territory, as per the 1973 Statute of the Indian, involves an extensive ethnographic and geographical survey of a land area in question, and a proposal that aims to fairly resolve any existing land disputes. Such proposals have frequently led to the eviction of non-indigenous occupants to lands, such as the case with the territorial integrity of Raposa Serra do Sol in Roraima.

Even so, the demarcation process can take decades to complete, often to the detriment of the indigenous communities who must either live in squalor alongside busy highways – or contend with private land holders and their hired guns.

Knowing this all too well, the Guarani-Kaiowá community from Pyelito Key/Mbarakay warned earlier this month that they would rather die than lose what little land they managed to recover.

The Guarani’s profound words–which echoes the needs and fears of all Indigenous Peoples in Brazil–both shocked and confused the international community.

Journalists and activists alike mistook the Guarani’s warning to mean that they were going to commit mass suicide if the courts ordered them off the ancestral land.

To be sure, “mass suicide” was simply never an option the Guarani considered. Rather, their plan was mass resistance, to the death.

Fortunately, the community will not have to follow through on their promise unless this latest ruling is overturned or worse, the current land title holder decides to take matters into his own hands. There is alot of precedent in both scenarios, especially when the land in question is Guarani land.