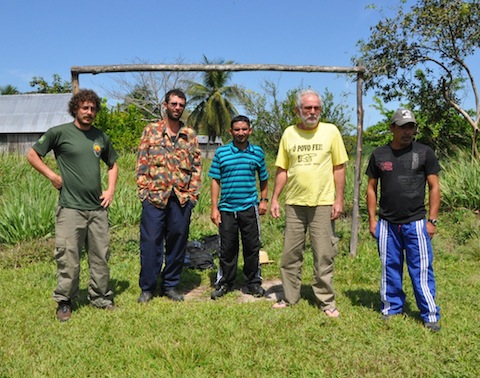 Jose Carlos dos Reis Meirelles and four employees of FUNAI, decided to travel to the region to try and stop the paramilitaries from moving in. Photo Blog da Amazonia
Support our journalism. Become a Patron!

Heavily armed drug traffickers from Peru are beleived to be hunting isolated indigenous peoples in the Brazilian state of Acre on the border with Peru, in order to make way for coca-growing operations.

According to FUNAI, Brazil’s National Indigenous organization, late last week a group of men armed with rifles and machine guns invaded a region of Brazil dedicated to Isolated Indigenous Peoples.

On August 5, Brazil’s Federal Police carried out an operation along the Xinan River, where FUNAI has an outpost, in order to arrest the paramilitaries. However, they only managed to detain one person, a Portuguese man previously convicted for drug-smuggling. They also found a package containing 20kg of cocaine, reports Survival International.

Sources in the office of the Federal Police Superintendent in Acre confirmed the operation, but said that they cannot comment on it because, “The issue is sensitive… it involves national security and relations between the two countries. We are awaiting authorization from Brasilia to release a report and disseminate images of the operation,” said one of the Federal Police sources.

As the Police decided to leave the area, four employees of FUNAI and the Amazon forest tracking expert, Jose Carlos dos Reis Meirelles, decided to travel to the region to try and stop the paramilitaries from moving in,” reports Altino Machado at Blog da Amazonia.

Since doing so, the paramilitaries have reportedly surrounded the remote guard post which FUNAI normally uses to study and protect the indigenous peoples. 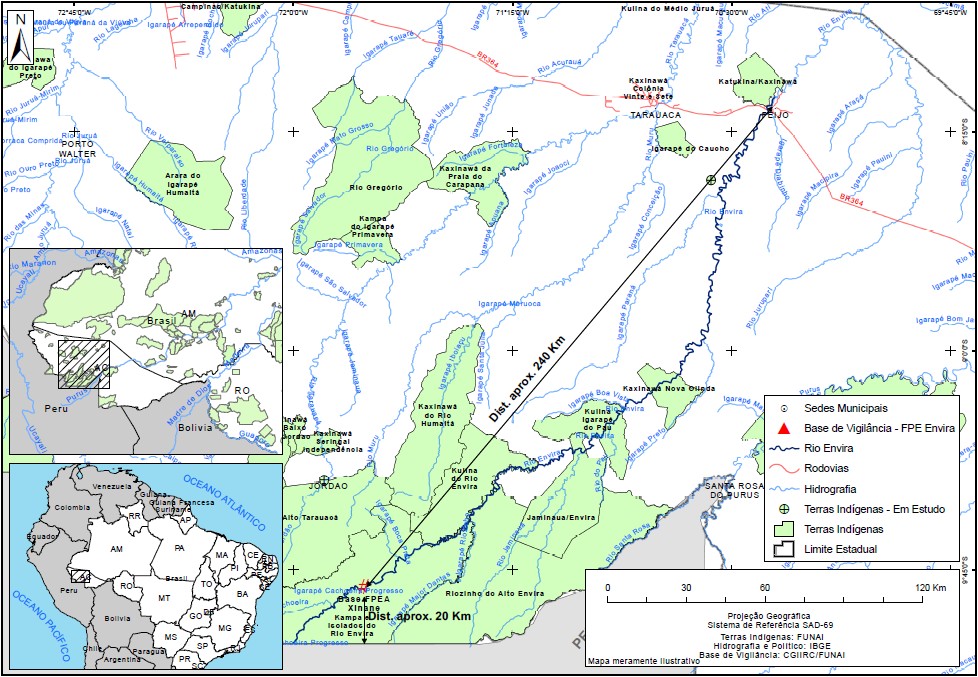 “We are here, with the Peruvians encircling us”, said Carlos Travassos, the head of FUNAI’s Department for the General Coordination of Isolated and Recently-Contacted Indians (CGIIRC), in a brief phone interview with Blog da Amazonia. Meirelles added: “We can’t spend much time on the phone or at the computer. We have to keep a close eye on the Peruvians outside. So far, it’s been quiet but we don’t know how the situation will develop.”

Later on, Travassos issued a warning that the paramilitaries appear to be organizing the murder of indigenous peoples in the territory. “We are now more concerned than ever about the situation of the isolated peoples. This situation could be one of the largest blows to the work for the protection of isolated indigenous peoples in recent decades. A catastrophe for our society. Genocide. We are outraged,” he said.

The Funai team estimates the presence of at least five men in more than one paramilitary group.

Travassos went on to say that a group of Ashaninkas heard the FUNAI team on the radio, and came up to bring them weapons and a boat motor. The Ashaninkas told them they saw fresh tracks belonging to three people, further down the river. “Tomorrow [Sunday] they will return to the village. At least here we now have more arms. We will need to make a new flyover to verify the integrity of the isolated peoples or at least of their malocas (community long houses). This is breaking news for us.”

On Sunday, the Pro-Indian Commission of Acre (CPI-AC) requested the urgent presence of the Armed Forces, the Ministry of Defense and Ministry of Justice, stating,

“It is necessary that the state and federal government, as well as the Peruvian government recognize that the indigenous peoples were, are and always will be a relevant part of the national policies and dynamics, especially on the border. Now, with their security threatened, we hope that the defense of national sovereignty will not once again exceed and disconnect indigenous rights and indigenist policy of the indians. It is necessary to address the issue in an integrated manner and understand that, in this case, national security should be linked to defense of life, not only of the nation, but of those who live, survive and make the Envira region of Brazil what it is – affirmed.”

According to latest reports, the Acre state government is preparing to send in a team of police by helicopter to provide security for the five men.

You can find updates and more information in Portugese at Blog da Amazonia. Thanks to Meg for providing the translations to English.