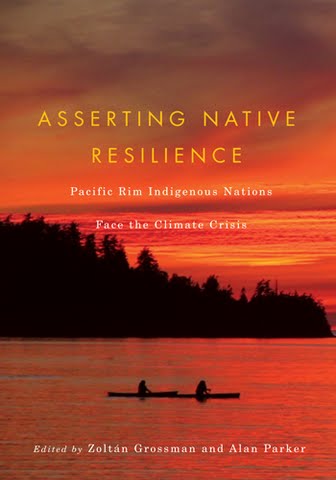 "We are all dependent on the health of our ecosystem, whoever we are and whatever we do." — Billy Frank, Jr., from the Foreword
Support our journalism. Become a Patron!

Extreme weather events forced an awareness of urgent climate disruptions this year, with July 2012 being the hottest month on record – hotter even than the Dust Bowl’s July 1936.

Grossman, a professor of Geography and Native American and World Indigenous Peoples Studies at The Evergreen State College (TESC) in Olympia, Wash., and Parker, a Chippewa Cree tribal citizen and Professor of Advanced Studies in Tribal Governments, and executive director of the Northwest Indian Applied Research Institute at TESC, write, “The people of the world, and especially Native communities, no longer have five to 10 years to begin planning. We must begin today!”

The editors maintain, “Indigenous nations are on the front line of the climate crisis. With cultures and economies among the most vulnerable to climate-related catastrophes, Native peoples are developing twenty-first century responses to climate change that serve as a model for Native and non-Native communities alike.”

Climate change threatens health, culture, livelihoods, species migration and traditional foods for place-based communities, the availability of fresh water, and oceans with increasing acidity (think of it as turning into a cola drink). This comprehensive book focuses on Native American tribes in the Pacific Northwest and Indigenous Peoples of the Pacific Rim already deeply affected by droughts, flooding, reduced glaciers and snowmelts, seasonal shifts in winds and storms, and the northward movement of species on the land and in the ocean. The book describes how, using tools of resilience, Native peoples are creating defenses to strengthen their communities, mitigate losses, and adapt where possible.

Asserting Native Resilience presents a rich variety of perspectives on Indigenous responses to the climate crisis. The anthology’s Foreword is written by Nisqually treaty rights leader Billy Frank, Jr. Chapters, authored by more than twenty contributors including tribal leaders, scientists, scholars, and activists from the Pacific Northwest, British Columbia, Alaska, and Aotearoa/New Zealand, and beyond explain the effects of the climate crisis, interpreting the science into language non-scientific readers can understand. They cover the current response plans created by tribal nations, possible paths, and give us cultural perspectives. A resource directory of Indigenous governments, NGOs, and communities is also included, as well as a community organizing booklet for use by Northwest tribes.

Winona LaDuke’s endorsement of the book includes, “Life is in water, air, and relatives who have wings, fins, roots, and paws, and all of them are threatened by climate change–as are people themselves. Parker and Grossman have done an excellent job in telling the stories of climate change, and the people who are standing to make a difference for all of us.”

The book, published by Oregon State University Press is available in paperback in bookstores for $24.95. Or call 1-800-621-2736, or visit online to order: http://osupress.oregonstate.edu/book/asserting-native-resilience. For more information, read an interview with the editors.