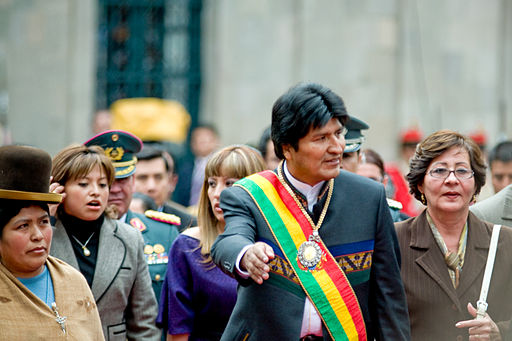 Bolivia’s Indigenous Future: A Balance of Preservation, Protection and Connection

Evo Morales’s very name seems to suggest his destiny of leading Bolivia in a valiant attempt at ‘moral evolution’ with all other Nation States in tow. Tasked with the difficult role of representing his Indigenous roots at the national and international levels of government and policy, Morales continues to make great strides that by all appearances bridge the dichotomy of tradition and modernity. Recent evolutions in Bolivian national policy regarding the protection and preservation of indigenous cultures continue to gain legal traction. Simultaneously, more Bolivians than ever before are poised to claim their rightful place in the interconnected web that is the information age.

Indigenous Peoples in Bolivia recently performed rituals to ‘Pachamama’, or ‘Mother Earth’ to bless the launch of Bolivia’s first telecommunications satellite. The satellite has been officially named, ‘Tupac Katar’, after the revered Amyara indigenous hero who led a resistance to Spanish colonization in the 18th century. The new satellite has been lauded with the potential to drastically reduce the cost of television and satellite services to rural communities, according to the Associated Press.

Bolivia’s indigenous communities have claimed another victory of late. A new law is being implemented, designed to instill harsh penalties on any entity found to be endangering the livelihood and preservation of Bolivia’s numerous Indigenous Peoples. Recent coverage on Infosurhoy.com provides a rundown of the new legal development, outlining four categories of offenses that will elicit harsh penalties on guilty parties.

The first category of offense cited is: ‘cultural genocide’, which carries a punishment of 15-20 years in prison for those found to be in violation. Such designated crimes would include actions deemed to exhibit a plausible threat to the continued existence of any Indigenous Peoples in Bolivia.

The second category in the new legal framework is ‘cultural disruption’, which is defined as any activity found to negatively alter indigenous livelihood–a crime that’s punishable by anywhere between 6-10 years in prison.

The third category, ‘financing of cultural disruption’, with a nod to Bolivia’s overall movement towards resisting destructive forms of imperialism, can carry an even harsher penalty of 8-12 years.

The final category, ‘environmental damage’ can also carry an 8-12 year sentence, perhaps highlighting another recent evolution in national jurisprudence that gave distinctive rights to Pachamama herself.

The new legal move towards preserving indigenous culture will also give birth to a new government agency known as DISEPIO. Translated to English as “The General Directorate of Indigenous Nations and Peoples at Risk of Extinction, in Voluntary Isolation or Without Contact”, DISEPIO, according to Deputy Minister for Native Indigenous Justice, Isabel Ortega, will be in charge of developing specific plans and programs that protect Indigenous Peoples under the new regulations.

In a recent interview, Guarayo indigenous leader, Bienvenido Zacu, lamented on the challenges ahead in bridging the gap between establishing such regulations and assuring their broad and continued implementation:

In order to protect the indigenous peoples of Bolivia, we need more than just regulations. We need to raise the level of awareness and we particularly need to provide ongoing health care, instead of responding to emergencies, such as the threat of extinction.

Zacu went on to suggest that broad public awareness campaigns might also play a role in these focused efforts at preventing cultural extinction. “We’re about to become extinct. We can’t stand back and let this happen. We need to get back in touch with our roots,” he commented.

According to the most recent Bolivian census, between 15 and 36 indigenous populations are hovering on the edge of cultural extinction. This new law will seek to preserve these important lines of heritage while the new technology services will aim to supplement the overall standard of living in rural areas. The Machineri Peoples, with a count of just 38 men, women and children, is the most vulnerable of all. Others, such as the Guarasugwe and the Tapieté remain intact, though with populations that are dipping below 100. The relatively large Amyara and Quechua Peoples are stable and strong, each having populations well over a million according to the same census count. It is thought that all of the headcounts may prove to be much higher once more advanced methods of obtaining and reporting familial heritage become available.

Bolvia’s forward strides in indigenous rights at home will most likely continue to pave the way internationally as a model for, and harbinger of, a more evolved standard of indigenous jurisprudence around the world. Landmark paradigm shifts, such as Bolivia’s official declaration of ‘plurinationalism’ in 2009, continue to reinforce Bolivia’s status as a global leader in the movement to recognize indigenous sovereignty as protected by international law. In return, increased international awareness may be expanded and reflected back to Bolivia’s Indigenous Peoples from the international stage, as more and more Bolivians gain access to information technology and thus claim their rightful power to represent themselves directly to the global community.

Those interested in a deeper exploration of the issues raised above will enjoy this documentary: