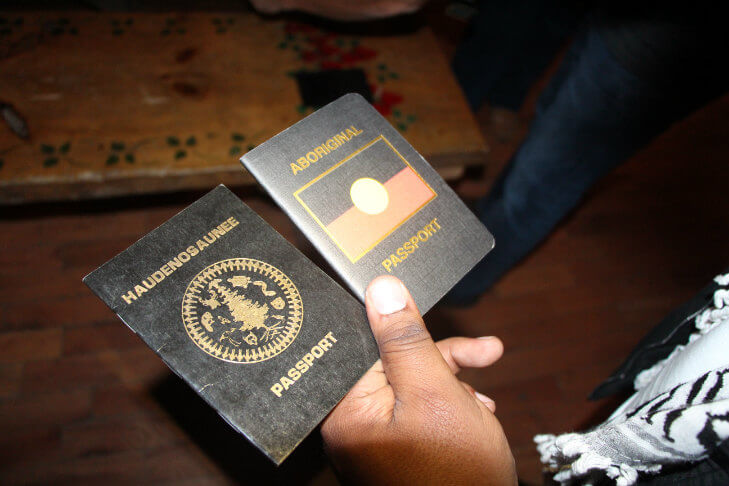 Nganyaywana man CALLUM CLAYTON-DIXON reflects on the nature of Native politics in so-called Canada and the parallels with Aboriginal politics in occupied Australia
Support our journalism. Become a Patron!

Callum Clayton-Dixon
In August 2014, Callum Clayton-Dixon (Nganyaywana), Meriki Onus (Gunnai) Pekeri Ruska (Goenpul) and Bogaine Skuthorpe-Spearim (Gamilaraay) traveled more than half way around the world to develop new ties with the Indigenous peoples of Turtle Island. Arriving as delegates of the Aboriginal Provisional Government, the group of Aboriginal activists spent more than four weeks on the road, making stops at the Unist’ot’en Camp, the Aseniwuche Winewak Nation, the Nisga’a Nation, the Mohawk Nation at Kahnàwa:ke and the Mi’kmaq Warrior Society and meeting many others along the way (including IC’s Editor-in-Chief). In this article, Callum takes a moment to reflect on the journey and the parallels he observed between Native politics in Canada and Aboriginal politics in occupied Australia.

As delegates of the Aboriginal Provisional Government (APG), we were welcomed by the Mohawk Nation at Kahnàwa:ke on the 11th of September 2014. This was without a doubt the most humbling occasion during our travels across so-called Canada.

The Chiefs and Clan Mothers led us into the Kahnàwa:ke longhouse, a gathering place for the political, social and spiritual functions of the Mohawk Nation. The men and women entered the longhouse separately. Aged wooden benches lined each side of the hall. Sitting opposite to the Mohawk dignitaries, we were in awe as two young men stood and addressed us in their native tongue. They spoke for at least half an hour, with just a few minutes set aside for summing up in English what had been said. In announcing themselves, they acknowledged all that is central to the Mohawk identity – their story of creation, their relationships with the natural world, as well as their responsibility to protect land, water, plant and animal.

We were then asked to take the floor. One at a time, Meriki, Pekeri, Bogaine and I stood, introducing ourselves briefly in what little of our own languages we knew. But this didn’t satisfy our hosts. “We hear you’re carrying a message on your travels,” they said. “Can you tell us what it is?”

Standing again, legs trembling slightly, I set about explaining our philosophy of Aboriginal nationalism, the reasons behind why we as Aboriginal people have our own passport, and our insistence to remain politically independent of the colonial Australian state.

Their response was something akin to: “Well then, I think we’ll get along just fine!”

The Mohawks are part of the Haudenosaunee (also known as the Iroquois) Confederacy, an ancient alliance of six nations united by the common goal to live in harmony. Like the APG, the Confederacy issue their own passports. These passports have been used by Haudenosaunee nationals to travel around the world (e.g. Bolivia, Japan and Switzerland) since the late 70s, and have recently been upgraded to comply with internationally recognized standards. Although Canadian customs officers refused to stamp our Aboriginal passports on arrival into Vancouver international airport, we were honoured to receive a stamp from the Haudenosaunee Confederacy on entering Kahnàwa:ke Mohawk territory.

Existing completely separate to Canada’s Indian Act system, the Haudenosaunee Confederacy rejects that band councils – installed by the colonial government – can legitimately represent their people. This seemed to be a common attitude among grassroots Native activists and traditionalists in so-called Canada.

The ‘Indian Act’ is a Canadian law governing the 600 plus federally recognized ‘Indian bands’ and their ‘Indian reserves’. This piece of legislation controls how bands and reserves can operate, along with defining who is and is not a ‘registered Indian’.

Being a registered Indian means you can attain band membership, vote in band elections and referendums, share in band assets including treaty benefits, access housing subsidies and free education programs (in some cases), and carry around an Indian ‘status card’ entitling you to highly specific tax exemptions on and off reserve. Whatever the benefits might be, Indian status and the limited rights attached are essentially being bred out. For instance, if a Native person with status has a child with someone without status, and their grandchildren have a non-status parent, their grandchildren won’t be considered Indians under Canadian law. It is a rather sinister form of eugenics, somewhat reminiscent of the Aboriginal Protection Act caste system.

After contending with generations of economic and political subjugation under consecutive Canadian governments, many band councils have ended up as bureaucracies rife with corruption, signing off on multimillion dollar mining deals left, right and centre while their communities continue to live in abject poverty.

The split between those engaged in band council bureaucracies as opposed to traditional forms of Native self-governance was glaringly evident when we visited the Unist’ot’en pipeline blockade 16 hours north of Vancouver. While the Moricetown Band Council appeared to support making multimillion dollar partnership agreements with resource giant Chevron in constructing a liquid natural gas pipeline through unceded Wet’suwet’en lands, many of the hereditary chiefs and clan members remain ardently opposed.

There are also Native groups in particular areas, such as the Aseniwuche Winewak in Alberta’s rocky mountain region, who have never had Indian status because they didn’t sign treaties with the Crown to begin with. We were taken on a tour of Aseniwuche Winewak Nation (AWN) headquarters in Grand Cache. Although not an Indian Act band council, AWN is still a corporation making money from the destruction of Native lands. They pride themselves on being a “competitive company” gaining the majority of their income through providing “equipment and labour services to resource industries”. The term ‘tribal capitalism’ is how we saw best to describe this situation.

Learning firsthand about the not-so-great reality of Canada’s treaties with Native peoples was by far the greatest eye opener for me. Prior to spending a month on the ground in various Native communities and meeting with an array of Native activists, my ill-informed view was that the treaty process had been of great benefit to the colonized. The vast majority of treaties served the purpose of coercing Native groups into signing away much of their land and pushing them on to reservations.

And contemporary land claims are really not that much different, the equivalent of souped-up Native Title agreements. The Canadian government promotes these ‘modern day treaties’ as a genuine form of self-government, but they are effectively yet another way of domesticating and restricting the self-determination of Native peoples.

The Nisga’a Final Agreement was signed between the Nisga’a Nation, the province of British Columbia, and Canada’s federal government in the year 2000. This agreement is said to be best practice when it comes to relations between colonial governments and Indigenous peoples. Yet the Nisga’a Treaty is referred to by many Natives as the “teardrop agreement” because the Nisga’a Lisms Government (NLG) has recognized authority over only ten percent of their traditional territory. On a map, this ten percent is in the shape of a tear drop. The treaty settlement provided funding for a highway to be constructed from the city of Terrace to the Nass Valley’s four Nisga’a villages. But the machine of modern ‘progress’ is undeniably destructive when it comes to Indigenous society, irrespective of whether it’s by choice or not. Locals complained that the completion of Highway 113 helped to speed up the degradation of Nisga’a culture. “Our children don’t want to learn their language anymore,” a Nisga’a fisherman in the coastal village of Gingolx told us. The NLG also signed off on a six million dollar pipeline deal in 2014, sanctioning what will be an immensely destructive industrial development that numerous other Native groups, including the Unist’ot’en, are fighting to stop.

Then there’s the Assembly of First Nations (AFN), formally established in 1985, which now works closely with the Canadian government in developing its policy on Indigenous affairs. Funded primarily by the federal government, the AFN is widely condemned by Native people as being a toothless advisory body and not representative of the greater Native population. Sound familiar? We have the same exact problem with the National Congress of Australia’s First Peoples.

There are many parallels to be drawn from the experiences of Native relations with colonial Canada. We don’t have an Indian Act, but we do have a Native Title Act determining which Aboriginal groups have and don’t have a limited set of rights to their traditional homelands. Instead of band councils, we have Native Title corporations and land councils governed by pieces of federal and state legislation. The Native Title process and the accompanying Indigenous Land Use Agreements (ILUAs), like Canada’s land claims and modern day treaties, are often responsible for ripping apart our communities and giving legitimacy to mining activities.

But the vigor and determination of the Unist’ot’en pipeline blockade, the Mi’kmaq Warrior Society’s fight against fracking in so-called New Brunswick, and the Mohawk Nation’s staunch stance on their right to political independence were of great inspiration. These examples of Native resistance and revival represent a transition in strategy – from dealing with colonial authorities in the hope of gaining recognition of their rights, to simply asserting their inherent rights and responsibilities as Indigenous peoples.

This is where we as Aboriginal people need to be looking towards. Our fight to decolonize won’t take place within the confines of Aboriginal organizations and corporations attached to and restricted by colonial legislation. The words of Pakana elder and activist Jimmy Everett’s ring true: “We can’t keep going and looking at White Australia thinking that we will find answers”.