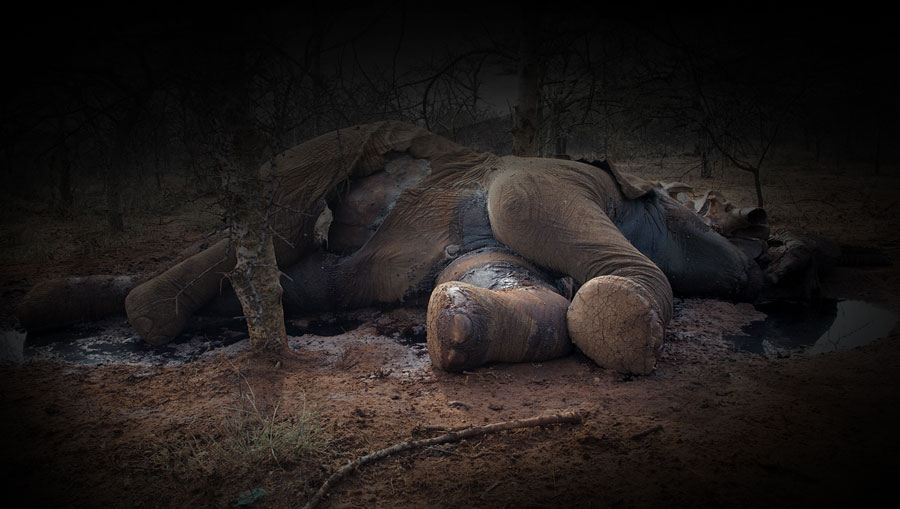 Blaming all San for the cyanide slaughter

More than 100 elephants have now died from cyanide poisoning in Zimbabwe’s vast Hwange National Park – and more carcasses are still being discovered in the bush. It is a shocking story.

But what is even more shocking is how the authorities have reacted – by targeting the San living outside the park, who have accused game-rangers and the police of brutal harassment following the poisoning of the park’s waterholes. And how little local or international attention has been focused on the plight of the San – as opposed to the fate of the unfortunate elephants.

Take for example Linah Tshuma’s son, Dedani. Employed as a domestic worker at the time of the poisoning, he was recently sentenced to 16 years in prison with an additional fine of US$200,000 after being convicted of involvement in the elephant slaughter.

“We are victims of poverty. My son is in jail because we are poor people,” said Linah, who is adamant that her son was treated unfairly. “I don’t know what happened but he was employed by a businessman, who I believe was the one dealing in ivory because he is on the run.”

Linah says what pains her most is that her son was sentenced within a few days of his arrest in a remarkably swift legal process, yet those who were arrested for supplying the cyanide – including the manager of the company that provided the poison, who has been charged with contravening some sections of the Environmental Management Act – were given US$100 bail.

“I don’t even have a single cent to go and visit my son in prison and I hear the police beat him and one of his eyes was bleeding,” said Linah, with tears welling up in her eyes. “His friends also told me his private parts were burnt.”

She accuses law enforcement agents of targeting the San, who are poor, while letting the rich – the real beneficiaries of ivory poaching – go.

And the vast majority of the San living with her in Cawuna village – about 220 km west of Bulawayo near the border of Hwange National Park – are extremely poor, uneducated and excluded from society. Just like the rest of the 1,200 San still living in western Zimbabwe.

For a long time, the San in Zimbabwe have complained that the government marginalizes them and has done nothing to improve their lives. And now they are bearing the brunt of the authorities’ reaction to the elephant massacre.

Christopher Dube, a vocal member of the San community, says that what is happening now is very sad because it is a clear violation of human rights – and yet no one seems to care.

“We are living in fear because rangers can come here at any time and harass us,” he said. “A few days ago they wanted to arrest me because they alleged it was me and my neighbours who went with the poachers to help carry out the operation. They came to me and said my neighbour confessed that we collaborated in the crime but it isn’t true.”

Dube says two members of the community have fled their homes and are now hiding in the bush, as they fear victimization by the rangers, who allegedly met them near the park and started assaulted them after accusing them of being involved in poaching.

“We started living in this area long before the National Park was established and we have never poisoned animals,” said Dube. “We are hunters by nature and we can co-exist with wild animals. But all of a sudden every San person is now a suspect. Are we that bad as a people?”

But this is not an isolated incident. Dube says the oppression of the San people started way back in 1928 when the Hwange National Park was established and they were evicted by Ted Davison, who was the first Warden of Hwange.

“Our grandfathers suffered under Davison,” said Dube, adding that “each time our donkeys strayed into the national park they were taken by the colonial government and were fed to the lions and we were not compensated.”

And after independence, the new Zimbabwe government did not make any efforts to help them. Indeed, the introduction of laws banning hunting forced them to abandon their traditional life as hunter-gatherers and take up subsistence farming. But most of them do not have cattle so they use their ‘bare hands’ to plough and usually they harvest little or nothing.

The San provide also cheap labour for the Ndebele and Kalanga communities in exchange for food. Sometimes they cross the border into Botswana in search of employment.

And it is possible that some of them were involved in the poisoning.

“Poverty is the problem here,” explains Dube, “Poachers target our people because they know they are poor. We are told that people were promised US$20 per tusk.”

But the authorities seem intent on targeting whole communities – aware that they have no money, no voice and little outside support – rather than pinpointing individual suspects.

For example, the government has given the people in the village of Tsholotsho, which is on the border of the Park, until the end of this month to surrender any cyanide to Chief Siphoso or face arrest. Unsurprisingly, the villagers are fearful about what will happen at the end of October as they all appear to have been declared guilty by the authorities – without any proof whatsoever.

“We were given a month and we do not know what will happen after that. Maybe the police will come and arrest us all or they will come and beat us up,” said Sihle Ncube. “We are living in fear and a number of villagers are thinking of crossing into Botswana before the ultimatum is up.”

Davy Ndlovu, a human rights activist who advocates for the rights of the San, said that the government has always put elephants before the San.

“Every year, at least one person is killed by an elephant here but nothing is done,” said Ndlovu. “During the farming season, elephants destroy their crops and the same rangers who are harassing the people now are nowhere to be seen when they are called to drive the elephants away.”

And then he asked a question which goes to the heart of the poaching debate in Zimbabwe and elsewhere.

“Who benefits from these animals because these villagers are poor although their area is rich in wildlife?”

Surely this is an incentive for the San to poach – to make a profit out of the elephants that live around them?

Indeed, this is a real fear. And villagers are not convinced the government is going to take the necessary measures to clear the cyanide from the National Park and surrounding areas – leaving them in danger in the months ahead.

And leaving them feeling traumatized, vulnerable and even more marginalized than they were before.

This op-ed originally appeared at osisa.org.