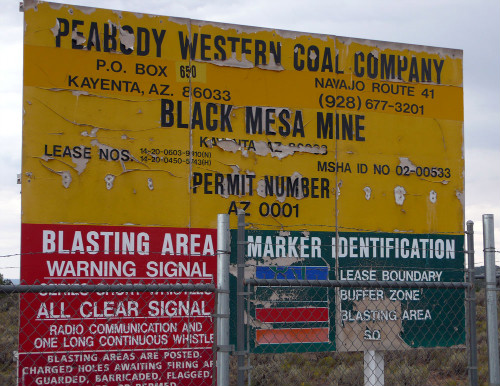 Peabody Coal’s massive coal mine project, on the traditional lands of the Hopi and Dineh People in northeastern Arizona, was dealt another major blow this week by an administrative judge in Salt Lake City..

“As a result,” Judge Holt states, “the Final EIS did not consider a reasonable range of alternatives to the new proposed action, described the wrong environmental baseline, and did not achieve the informed decision-making and meaningful public comment required by NEPA [National Environmental Protection Act].”

The permit was supposed to “guarantee” Peabody’s operation until 2026, or “until the coal runs out.” Now it’s on hold—-a welcomed turn of events in the decades-long struggle against the project, as Wahleah Johns, co-director of Black Mesa Water Coalition stated on January 8, 21010:

“As a community member of Black Mesa I am grateful for this decision. For 40 years our sacred homelands and people have borne the brunt of coal mining impacts, from relocation to depletion of our only drinking water source. This ruling is an important step towards restorative justice for Indigenous communities who have suffered at the hands of multinational companies like Peabody Energy. This decision is also precedent-setting for all other communities who struggle with the complexities of NEPA laws and OSM procedures in regards to environmental protection. However, we also cannot ignore the irreversible damage of coal mining industries continues on the land, water, air, people and all living things.”

“This is a huge victory for the communities of Black Mesa impacted by coal mining and proof that Peabody can’t have its way on Black Mesa anymore,” adds Sierra Club’s Hertha Woody, also a member of the Navajo Nation. “Coal is a dirty, dangerous and outdated energy source that devastates communities, jeopardizes drinking water and destroys wildlife habitats. This decision is yet another example of why it no longer makes sense to burn coal to get electricity.”

Just a few weeks ago, the EPA issued its own decision and withdrew Peabody’s water permit, after the Black Mesa Water Coalition, To’ Nizhoni Ani (“Beautiful Water Speaks”), Diné CARE and several other groups raised concerns the company was violating NEPA, as well as the Clean Water Act and the Endangered Species Act.

The diverse group of defenders, some of whom were recently blacklisted for being “a threat” to the Hopi and Navajo Nations, also alleged the EPA did not fully consider the environmental impacts of Peabody’s waste ponds, and failed to provide opportunities for public involvement in their decision-making process.

“For three-and-a-half decades, Peabody’s coal mining operations on Black Mesa have been dependent on the sole source of drinking water for Navajo and Hopi communities. Between 1969 and 2005, Peabody pumped an average of 4,600 acre-feet of water annually from the Navajo Aquifer, causing significant damage to Navajo and Hopi community water supplies. The permit … would have allowed Peabody to continue discharging heavy metals and toxic pollutants into washes, tributaries and groundwater relied on by communities,” states the Sierra Club in a December Press Release.

Following the decision, Nicole Horseherder of To’ Nizhoni Ani, who lives about 20 miles away from
Peabody’s Black Mesa Complex, said “I am very happy about the EPA’s decision to withdraw the permit. I am glad to see a federal regulatory agency finally doing its job. In the course of our struggle to protect the water and bring awareness to the impacts of this coal mining operation, we have never had such a favorable decision by any agency charged with regulating the impacts of Black Mesa.”