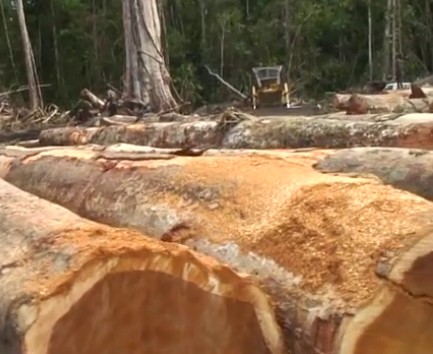 Filmed undercover, it is a tale of exploitation and broken promises, where local people are treated as second-rate citizens in their own country by Malaysian logging companies and corrupt politicians.

Customary landowners are forced into signing documents they don’t understand, for the promise of “development” – fresh water, health and education, but these essential services are rarely provided. Instead, their traditional hunting grounds are destroyed, waterways polluted, and their way of life ruined forever.

For background or more information about the film, visit http://www.bikpelabagarap.com/

Note from the filmmaker
Bikpela Bagarap / Big Damage has been independently produced and funded. If you have been moved in any way by the film or the issues that it presents, please take it upon yourself to raise and spread awareness about the situation in Papua New Guinea.

The full film is available to watch for free on this website, and I am relying on YOU to spread the word. Please feel free to use social media to make people aware of this film/website and also follow/like on Facebook to help this film reach as wide an audience as possible.

“If a tree falls in a forest and no one hears it, it doesn’t make a sound”.