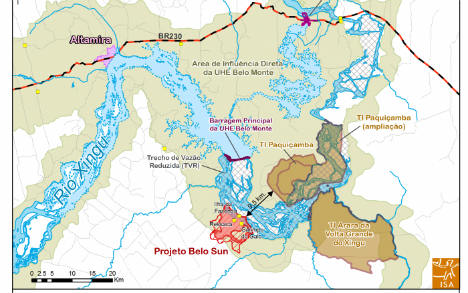 Altamira, Brazil – In response to a civil lawsuit filed on November 13th by the Federal Public Prosecutor’s office in the state of Pará (MPF-PA), a federal judge has ordered the immediate suspension of environmental licensing for a massive gold mining project proposed by Canadian-based Belo Sun Mining along the Big Bend (Volta Grande) of the Xingu River until full analysis of effects on indigenous peoples has been carried out within the Environmental Impact Assessment (EIA). MPF also calls for a process of free, prior and informed consultations and consent among local indigenous peoples regarding the project in accordance with ILO Convention 169 and the Brazilian Constitution.

Judge Sergio Wolney stated in his decision that, “the licensing of the mining project without necessary and prior analysis of impacts on indigenous peoples – a fact confirmed by evidence presented in this case – constitutes a serious violation of environmental legislation and indigenous rights.”

According to Wolney an “undeniable fact” is that the mining project, slated for installation in the immediate vicinity of the controversial Belo Monte dam complex, may lead to devastating and irreversible consequences – including synergistic impacts with Belo Monte – for the quality of life and cultural heritage of indigenous peoples and their territories.

For the MPF, granting an environmental license for an additional project with such severe probable impacts without a prior study of its consequences for indigenous populations is inadmissible. The people of the Big Bend of the Xingu will already suffer the worst impacts of Belo Monte as a result of the diversion of 80% to 90% of the Xingu River’s flow to feed the dam’s turbines. The potential impacts of Belo Monte are so severe that the federal environmental agency (IBAMA), when granting a first phase license for the project, established a six-year period to test whether the Big Bend and its people would be able to survive a permanent hydrological deficit and other consequences of diversion of the Xingu river associated with dam construction.

Meanwhile, Belo Sun stated today that it will take all “applicable legal measures to appeal the decision of the Federal Judge and defend the validity and legality of the licensing process.”

“It’s interesting that Belo Sun claims to collaborate with regulatory and legal authorities in Brazil when in practice the company questions these same authorities and disrespects national and international law, refusing to acknowledge the severe potential impacts of their mining enterprise on indigenous peoples of the Xingu.” Said Maíra Irigaray Castro, Brazil Program Coordinator at Amazon Watch.

The Volta Grande Mining Project proposed by Belo Sun aims to become the largest gold mining project in Brazil. The project would be located about 10 km downstream from the Belo Monte hydroelectric complex currently under construction, which will divert an estimated 80% of the flow of the Xingu River from its natural channel on the Volta Grande. The so-called “area of direct influence” of Belo Sun’s Volta Grande project is located 9.5 km from the Paquiçamba Indigenous Territory, home of the Juruna indigenous people.

On November 18th the State Environmental Council in the state of Pará (COEMA) met to discuss whether to grant a preliminary environmental license for the Belo Sun project. One of its members, a state public prosecutor, requested for the decision to be postponed, calling for a more detailed analysis of project documents. The next meeting of the Council is scheduled for December 2nd. However, with yesterday’s federal court ruling, the state council is now legally prevented from approving the controversial Belo Sun project. A failure by Belo Sun or the state government of Pará to comply with the federal court decision will result in a daily fine of R$20,000 (approximately US$16,000).