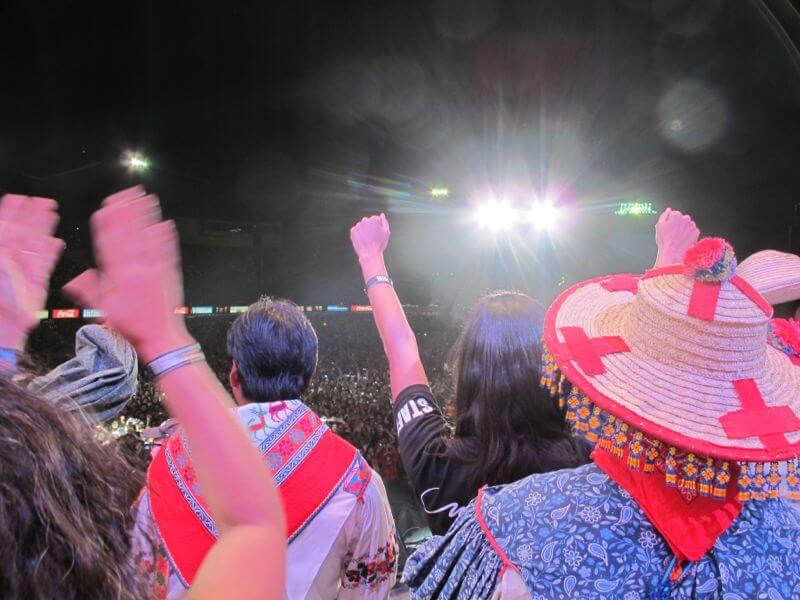 Behind the scenes: What the fans of Wirikuta Fest bought with their tickets

It was a long time coming – but it was worth the wait.

Nearly two years ago, more than a dozen of Mexico’s biggest performing artists came together in a mega-event aimed at saving Wirikuta, one of the country’s most sacred sites, from devastation at the hands of Canadian gold and silver mining operations.

It was a triumphant moment for the indigenous Wixarika people and for indigenous movements in general when, as the daylong festival came to a close, they were invited to come up on stage. A massive screen flashed images of traditional Wixarika beadwork behind them as 60,000 fans chanted, in unison, “Wirikuta no se vende! Wirikuta se defende!” (Wirikuta is not for sale! Wirikuta will be defended!)

Leaders of the indigenous Wixarika people and the Wirikuta Defense Front, the civil society coalition that is supporting them, came forward in a Mexico City press conference recently to give an accounting of how the money was spent – an example of innovation in the face of daunting challenges.

A dozen activists assembled on the dais at the Agustin Pro Human Rights Center in Mexico City, half of them in the white cotton ceremonial dress of the Wixarika people, colorfully embroidered with their sacred plants and animals. One of the activists, inconspicuous in jeans and a T-shirt, was the rock superstar Ruben Albarran of Café Tacuba, arguably one of Mexico’s most beloved performing artists. 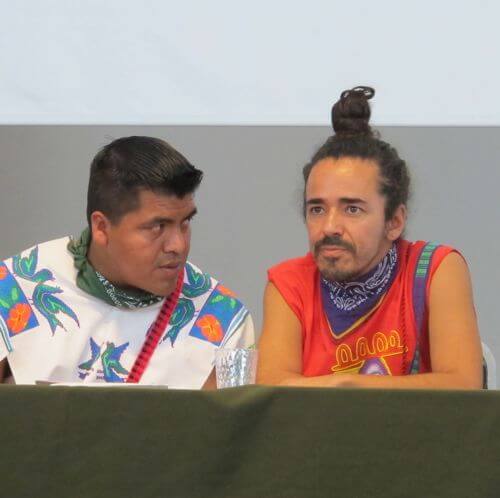 Santos de la Cruz, the young Wixarika attorney and traditional leader who has served as a spokesperson for the movement, was among the first to speak.

“It’s a struggle that has been very difficult for us; it’s not been something we’ve done because we liked doing it,” he said, reflecting his people’s reluctance to involve themselves in conflicts; indeed, it was their retreat into the rugged Western Sierra Madre with the incursions of Spanish colonialists that allowed them to retain their intricate Earth-based cosmology, perhaps more than any other tribal group in the Americas. “It was born of necessity – not only from an attack on our fundamental rights, but because they are threatening to exterminate our sacred heart that is called Wirikuta.”

The Wixarika people live in their mountain communities hundreds of miles to the west; but to them, Wirikuta is the birthplace of the sun and the origin of their spiritual traditions; an area that spans more than 140,000 hectares of desert and mountain in the north-central state of San Luis Potosí and includes the colonial mining town of Real de Catorce. The region is dotted with sacred springs, mountains and other auspicious landmarks for the Wixarika and has been the destination of pilgrimages since time immemorial; it also serves as the hunting ground for the Wixarika sacred plant, the peyote cactus, used in traditional ceremonies to maintain communication with and guidance from the nature spirits that live there.

In June of 2010, the Wixarika people became aware that the government had granted concessions for more than half of their sacred territory to several mining companies including First Majestic Silver and Revolution Resources of Canada so they could eventually open silver and gold mines. The Wirikuta Defense Front, an unusual coalition of civil society groups with the Wixarika traditional leaders at the helm, arose as a response. Its legal team has managed to get a legal suspension halting any government agency, at the national, state and local levels, from granting any permits or authorizations to any mining companies that would allow them to further explore or exploit the area as the case works its way through the courts.

Tensions around the issue are high in the area, which has among the country’s highest rates of emigration to Mexico’s northern states and to the United States because of the devastating poverty, a legacy of generations of mining going back to the Spaniards that left large swaths of barren landscape and depleted water. Many locals fear the impacts of modern subterranean and open pit mining will render what’s left uninhabitable; others see an opportunity to once again have good-paying jobs and economic development that will keep husbands and sons at home.

One of the most difficult challenges for the four-year-old Wirikuta Defense Front has been countering the powerful influence of the mining companies in the area. Those who dare to speak out against the proposed mining projects face harassment, threats and intimidation. Since the beginning, a major part of the group’s strategy has been to promote sustainable development in the region as an alternative to the mines. For a grassroots group like this one, however, coming up with the funds to make a meaningful impact – especially in the face of the millions the mining companies were spending on public relations projects and bribes – seemed an overwhelming task.

Wirikuta Fest was the answer; the result of more than a year of organizing, culminating in a powerful moment in the history of indigenous struggles with a lineup of superstars like Caifanes, Calle 13, Café Tacvba, Enrique Bunbury, Julieta Venegas and many more, it wasn’t hard to fill the massive Foro Sol stadium with a standing-room only crowd. 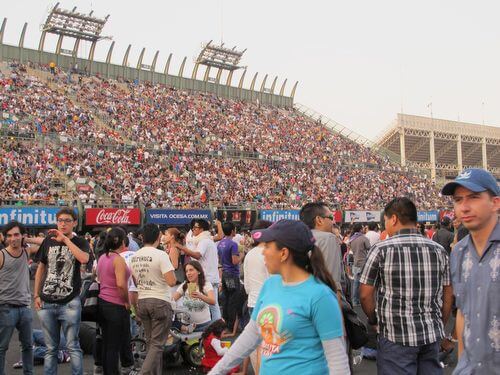 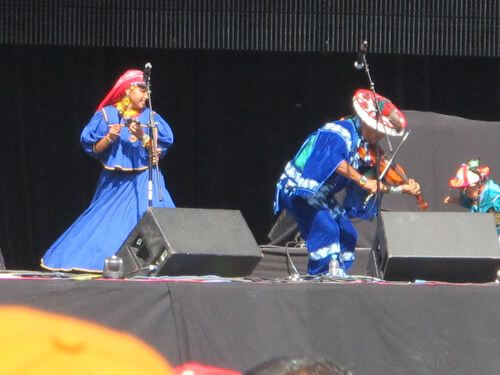 Venado Azul, a popular band comprised of a Wixarika couple and their small son, were among the headliners at Wirikuta Fest.

The campaign yielded close to 8 million pesos – more than $700,000 – most of which was destined to winning the hearts and minds of the communities in Wirikuta by providing them with much-needed practical support in a multitude of ways. Tunuary Chavez, an environmental analyst and one of the founders of the Wirikuta Defense Front, pointed out the significance of this decision.

“It’s important to note that in the Wixarika communities, there is also hunger, there is also a lack of services and good education. But they didn’t hesitate for an instant in saying that all the money should go to Wirikuta,” said Chavez.

De la Cruz spoke of the various ways the money was applied: on the legal front, in supporting the legal team in fighting the battle in the courts, procuring at least temporarily a suspension of the 78 concessions the government has granted to mining companies; on the political front, the group has worked to raise awareness of the issue and built alliances with other organizations and indigenous groups at the national and international level that are working to protect their lands and rights from destructive multinational megaprojects like mines and dams.

Most important, however, has been the work on the ground in the communities, and Mario Alberto Becerro, the project coordinator, gave a brief rundown of projects that have already substantially improved the lives of hundreds of local residents.

“The process of getting these projects done was nothing easy,” Becerra commented – given that the municipal president had been hand-picked and supported by the mining company, the environment was a tough one, filled with threats and sabotage.

“There was a moment when we said, ‘how can we keep going? This is really dangerous,’” he said. “We thought about quitting.”

Just in time, 2,500 DVDs arrived – a media campaign called “Information is a Right,” featuring interviews with scientists and other experts explaining the ecological and health risks of the mining industry, produced by volunteers with money from the Wirikuta Fest.

“So we began to distribute the information in the communities and we began to see that really there were a lot of people who were not at all in favor of the mines,” said Becerra. “So we were able to enter the communities much more easily and see close-up what they really needed.”

Clearly one of the things the local residents needed most was better access to water for irrigation and household use. The region traditionally relies on subsistence agriculture, and the past few years have seen devastating droughts. In the community of Refugio de Coronados, for example, they were able to install 3½ kilometers of six-inch pipe with 42 water outlets, giving member farmers direct access to the local water supply in their fields and cutting water bills by two-thirds; the water system was the first phase in a long-term permaculture project for the 19 member farmers.

In the town of Los Catorce, they built 28 composting toilets, trained a women’s cooperative, “Flor de la Sierra,” to produce medicinal ointments and helped create a marketing plan; and constructed two large solar dehydrators and trained local people in their use for drying the fruit produced in the area during the rainy season.

In Mastranto, they purchased and installed a hose to carry water from a well 3 kilometers away, and installed four cisterns in the community, giving 400 people access to the previously inaccessible water.

In Las Margaritas, they helped build the community center and are currently fixing deteriorated roofs and installing a rainwater catchment system for 20 rooftops, with local youth contributing their labor.

Another urgent need is employment – or, from a different standpoint, ways that subsistence farming families can supplement their incomes and otherwise improve their quality of life so they can be supported in staying on the land they love. Many of the projects were designed with that need in mind.

In Real de Catorce, the Real de Catorce Mountain Cyclist Club got three high-performance bikes, and the Wixárika Regional Council and the local Livestock Association organized a project encouraging cultivation of native maize in which 14 tons of maize seed of local origin were distributed to 204 families. And in the tiny town of Wadley, 14 families got support in setting up their own home garden plots.

The list went on, and there are other projects in the works that the group didn’t make public for security reasons; but the most important thing, he said, is that local people have felt supported in a meaningful way. Other national and international organizations have come forward to help as well, and the neighbors have begun connecting across the communities to strengthen and grow a once fragile movement.

“We don’t know how long this struggle is going to last, because those natural resources are always going to be there,” Becerra said. “I think it will be a lifelong struggle, so hopefully we will continue to do it well.”

Albarran, who is working with a film crew to tell the story behind Wirikuta Fest, hopes the documentary will give an inspirational look into the connections between social movements and the need to keep them moving forward.

Albarran, whose own spiritual path has taken him to the desert of Wirikuta, spoke of a deeper connection to the movement.

“I love knowing that the spearhead of this struggle is spiritual, because personally I think we share that, it’s a spiritual moment for everybody, and that is what is leading us and giving strength, Father Sun is giving us strength, and we will overcome. Also, at some point we can get rid of the thought that some win and others lose; we will all live in harmony, and we will be able to enjoy the blessings the Great Spirit has given us in these beautiful and spiritual places like Wirikuta.”