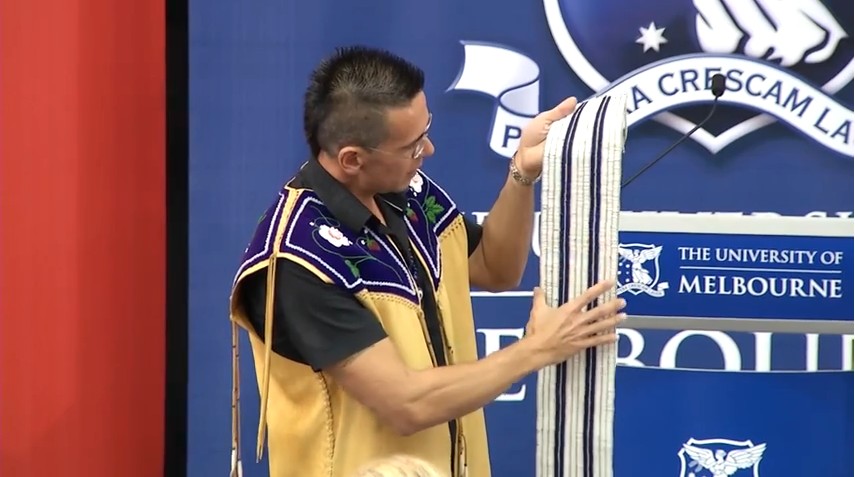 Being and becoming Indigenous: Resurgence against contemporary colonialism

On Nov. 28, 2013, Kanien’kehá:ka scholar activist Taiaiake Alfred was in Melbourne, Australia, to deliver the 5th annual Narrm oration at the Melbourne Institute for Indigenous Development at the University of Melbourne. The title of his oration was: Being and becoming Indigenous: Resurgence against contemporary Colonialism.

Named after the Wurundjeri word for the land surrounding Melbourne, the Narrm Oration profiles leading Indigenous thinkers from across the world to enrich our ideas and understanding about possible futures for Indigenous Australia.

A Professor in Indigenous Governance and in the Department of Political Science at the University of Victoria, Taiaiake Alfred is a specialist in studies of traditional governance, the restoration of land-based cultural practices, and decolonization strategies. An indigenous intellectual of international renown, he is the author of many scholarly publications and writings, including Wasáse (Broadview, 2005); Peace, Power, Righteousness (Oxford University Press, 1999/2009); and Heeding the Voices of Our Ancestors (Oxford University Press, 1995).

“There is a danger in allowing colonization to be the only story of Indigenous lives. Colonialism is an effective analytic frame, but it is limited as a theory of liberation. It is a narrative in which the Settler’s power is fundamental and unquestioned; it limits the freedom of the colonized by framing all movement as acts of resistance or outcomes of Settler power. For Indigenous peoples, colonial systems have always been ways of gaining control over Indigenous peoples and their land for the sake of Western notions of progress and Settlers’ interests. We now live in an era of post-modern colonial manipulation; the instruments of domination are evolving and elites are inventing new methods to erase Indigenous identities and presences. While on the surface subtle and non-violent, these strategies deny the ability of Indigenous people to act on their authentic identities, severing Indigenous lives from vital connections to land, culture and community, and offer Indigenous people only one option: dependency or destruction. Far from being a post-colonial era, the very survival of Indigenous nations is threatened today just as in earlier more brutal eras of colonial oppression. The current discourse and framing of Indigenous peoples in Canada is an example of this new reality. A façade of “reconciliation” is being used to buttress white supremacy, pacify and co-opt Indigenous leadership, and facilitate total access to Indigenous lands for resource development. Against this, an ancestral movement has re-emerged among some Indigenous thinkers and Indigenous and Settler ally activists in North America: Indigenous Resurgence. These people are dedicated to recasting Indigenous people in terms that are authentic and meaningful, to regenerating and organizing a radical political consciousness, to reoccupying land and gaining restitution, to protecting the natural environment, and to restoring the Nation-to-Nation relationship between Indigenous nations and Settlers. This reframing of Indigeneity as Resurgence promotes the kind of action and provides the spiritual and ethical bases for a transformative movement that has the potential to liberate both Indigenous peoples and Settlers from colonialism.”

Speakers (in order of appearance)