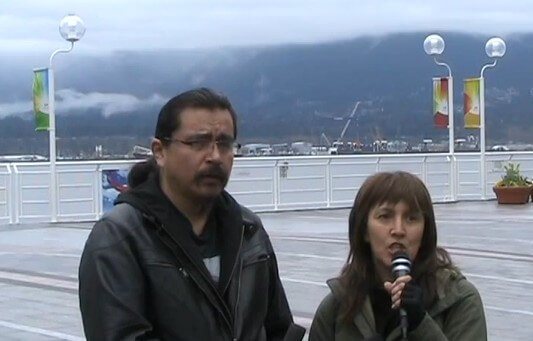 Leaders of the Unist’ot’en resistance camp held a press conference in Vancouver on April 7, 2014 in response to leaked information that the Provincial government is preparing an injunction against the camp. The camp is in Wet’suwet’en territory in northern BC on the route of the Pacific Trail fracked gas pipeline.

Premier Christie Clark has staked her political future on liquefied natural gas (LNG) exports, more accurately called liquefied fracked gas or LFG. But pipelines from the fracking fields in the province’s north-east must pass through unceded Indigenous territory on the way to the coast. They therefore require the free, prior and informed consent of the people of those lands; consent they do not have and will not receive from the Unist’ot’en and the other Wet’suwet’en hereditary clans.

“While the elected leadership of some Indian bands have signed agreements regarding the Pacific Trail Pipeline, Wet’suwet’en hereditary clans have jurisdiction over their territories” says Freda Huson “The Unist’ot’en are standing up for our territory, and protecting Mother Earth on a global scale by keeping fracked gas in the ground.”

Huson asserts that both indigenous law and the Canadian Supreme Court Delgamuukw decision prevents Indian band councils from unilaterally authorizing projects on Unist’ot’en land. She asserts that the Wet’suwet’en hereditary clans have the right to free, prior and informed consent — the right to say no — regarding any major projects, such as pipelines, on their unceded territory.

Resistance camp spokespeople Freda Huson and Toghestiy were in Vancouver after attending two historic gatherings of Indigenous land defenders and climate justice activists. The first was in Victoria March 29 to 31 and the second April 4th and 6th in Vancouver. The gatherings brought together hundreds of people opposing fracked gas and oilsands bitumen pipelines for joint training and strategy development.