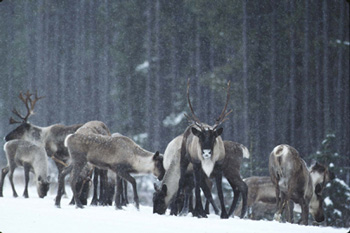 Earlier this month, the West Moberly First Nation (WMFN), in northeastern British Columbia, put the junior mining company First Coal Corporation (FCC) “on notice” that they will explore all possible avenues – including legal action – to prevent further destruction to the Threatened Burnt/Pine caribou herd as well as to protect their own treaty rights and interests.

Currently, First Coal is awaiting government approval to remove as much as 100,000 tonnes of material from a 17-hectare region of land known as the “Goodrich property.”

The region is a core habitat for the Caribou herd, who are currently listed as threatened under the Species At Risk Act.

Vancouver-based Ascenta Finance Corporation, a leading investor in FCC, is also being put on notice by the First Nation.

“Current and prospective private investors in FCC may be unaware of FCC’s permit violations and the unfolding conflict the company has spurred,” says Roland Willson, Chief of the WMFN.

For instance, according to a provincial Inspector of Mines, the FCC is
in contravention of the Mines Act as well as the Health, Safety, and Reclamation Code for Mines in BC.

Further, the company has no “legal authorization” to clear the land, and they have yet to carry out a meaningful consultation with WMFN.

“These violations call into question their managerial competence,” states Chief Willson, who goes on to explain that WMFN wants the BC Government to halt any further approvals until “the Crown initiates a meaningful consultation process with WMFN with respect to FCC’s activities.”