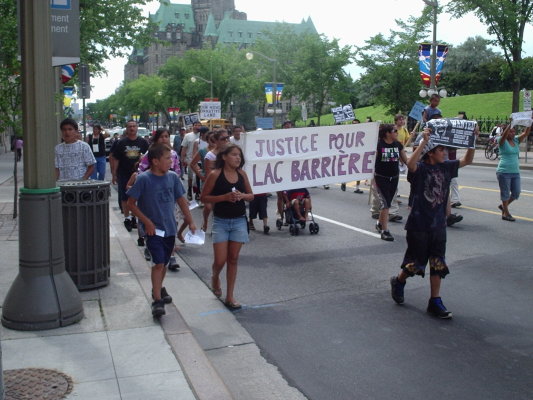 The Barriere Lake Solidarity collective is asking groups and organizations to endorse a list of demands issued by the Algonquins of Barriere Lake.

Located about 400 km north of Montreal, Quebec, the Algonquin community was unjustly placed under third party management earlier this year by the Federal Government.

The Algonquins are demanding that the government revoke this management status (something that should be reserved for bankrupt corporations, not indigenous communities with sovereign rights) and that it stops interfering with their internal governance practices. Among other demands, they are also urging the Province of Quebec to honour the agreements it signed with the community, including the 1991 Trilateral and 1998 Bilateral agreements.

See below for the full list of demands and the solidarity collective’s request for its endorsement.

A CALL FOR ENDORSEMENTS AND SOLIDARITY

As you might know, in March the Algonquin community of Barriere Lake, located 400 kms north of Montreal, Quebec, had their Customary Chief and Council deposed by the Canadian government, with support from the Quebec government, in an attempt to get out of binding agreements signed with the community.

This is only the latest chapter in Barriere Lake’s long struggle to wrest control over their lives and lands from governments and corporations. In 1991, Barriere Lake compelled Canada and Quebec to sign a groundbreaking land management and sustainable development agreement, after a campaign of civil disobedience that caught international attention. The Trilateral agreement set important precedents: it would give Barriere Lake decisive say in the management of 10,000 square kilometers of their traditional territory, protect Algonquin land uses, and give them a share in the resource-revenue from logging and hydro projects on their land. Praised by the Royal Commission on Aboriginal Peoples, the agreement was an alternative to the Comprehensive Land Claims process, which Barriere Lake rejected because it would force them to extinguish their Aboriginal title and rights, among other reasons.

The federal and provincial governments never liked the agreement, and have tried everything to undermine it – including the unilateral leadership change in March. It’s the third time in the past 12 years that the government has refused to recognize the legitimate community leadership. Today, the agreement remains unimplemented.

For background and information on Barriere Lake: http://www.barrierelakesolidarity.blogspot.com/

Though a small community with few resources, Barriere Lake has demonstrated remarkable tenacity in their struggle for self-determination and the protection of their culture and land. But it is a struggle that can only succeed with broad support and solidarity from non-native people.

The Barriere Lake Solidarity collective in Montreal, taking direction from Barriere Lake, is looking for groups and organizations to ENDORSE THE COMMUNITY’S LIST OF DEMANDS in order to build pressure on the federal and provincial government.

Email us if you can: barrierelakesolidarity@gmail.com

1. That the Government of Canada agree to respect the outcome of a new leadership re-selection process, with outside observers, recognize the resulting Customary Chief and Council, and cease all interference in the internal governance of Barriere Lake.

2. That the Government of Canada agree to the immediate incorporation of an Algonquin language and culture program into the primary school curriculum.

3. That the Government of Canada honour signed agreements with Barriere Lake, including the Trilateral, the Memorandum of Mutual Intent, and the Special Provisions, all of which it has illegally terminated.

4. That the Government of Canada revoke Third Party Management, which was imposed unjustly on Barriere Lake.

5. That the Province of Quebec honour signed agreements with Barriere Lake, including the 1991 Trilateral and 1998 Bilateral agreements, and adopt for implementation the Lincoln-Ciaccia joint recommendations, including $1.5 million in resource-revenue sharing.

6. That the Government of Canada and the Province of Quebec initiate a judicial inquiry into the Quebec Regional Office of the Department of Indian Affairs’ treatment of Barriere Lake and other First Nations who may request to be included.

7. That the Government of Quebec, in consultation with First Nations, conduct a review of the recommendations of the Ontario Ipperwash Commission for guidance towards improving Quebec-First Nation relations and the SQ’s procedures during policing of First Nation communities.

Apart from ENDORSEMENTS, we are seeking other forms of support:

**Consider getting INVOLVED in our campaign – as a group, or as an individual – during the upcoming months.

**Consider making a DONATION, to support Barriere Lake’s needs and to help with our mobilization efforts. Contact us by e-mail to make a donation, or donate directly to Barriere Lake through our website.
http://barrierelakesolidarity.blogspot.com/2008/03/donations.html

**If you want UPDATES, we can add you to an email list to notify you about upcoming events and actions. Just email barrierelakesolidarity@gmail.com