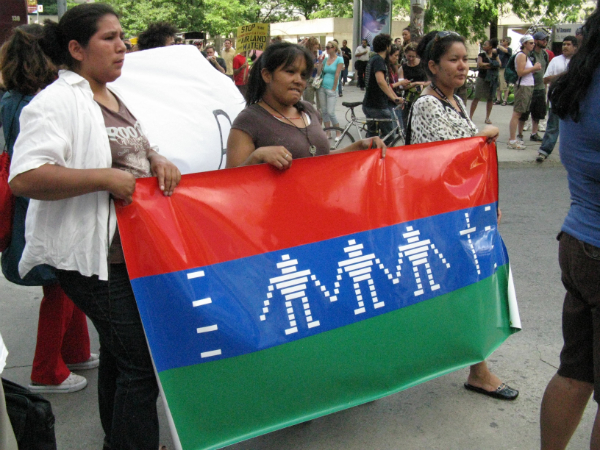 Three-Figure Wampum belt, dated back to around 1760, is an agreement between the Barriere Lake Algonquine, the Church and the settlers. The belt depicts an acknowledgement whereby, under the sign of the cross, no interference would be made into the local native ways of life. Photo c/o ipsmo.org
Support our journalism. Become a Patron!

Early this morning, a group of Barriere Lake Algonquins set up a peaceful blockade on the access road leading to their reserve, about 300 km north of Ottawa.

The defensive action was aimed at stopping a government-appointed electoral officer from holding a nomination meeting on the reserve for the government’s highly-controversial imposed Band Council Election.

Below, a press release about the action from Barriere Lake Solidarity.

Kitiganik, Rapid Lake, Algonquin Territory / – This morning Barriere Lake community members set up a peaceful blockade on the access road to their reserve to prevent an electoral officer from conducting a nomination meeting for Indian Act band elections.

The electoral officer aims to implement the federal government’s plan to abolish Barriere Lake’s traditional leadership selection system by holding nomination meetings in the community for a band election imposed through section 74 of the Indian Act. Barriere Lake is one of the few First Nations in the country who have never been under the Indian Act’s electoral system, continuing instead to operate under a Customary Governance Code that they have used since time immemorial.

At its General Assembly in Winnipeg on Wednesday, the Assembly of First Nations passed an emergency resolution condemning Minister of Indian Affairs Chuck Strahl and demanding that he rescind the section 74 order to impose Indian Act band elections.

“We reject the Minister’s unconstitutional attempt to assimilate our leadership selection customs by imposing a foreign regime on us. The community is unanimously in favour of continuing to be governed by our customs,” says Marylynn Poucachiche, a community spokesperson. “Because the government has not heeded its constitutional obligations or our community’s wishes, we are turning to peaceful direct action. We will be preventing the nomination meeting from proceeding and are demanding the federal government immediately cease and desist in their attempt to abolish our customs. The government is breaking the law, but through our actions we are protecting it.”

Barriere Lake’s inherent right to customary self-government is protected by section 35 of the Canadian Constitution. A May, 2010 report by the Standing Senate Committee on Aboriginal Peoples affirmed that First Nations have the right to maintain control over their internal affairs and be free to pursue their vision of customary government.

“The Canadian government is trying to forcibly assimilate our customs so they can sever our connection to the land, which is at the heart of our governance system,” says Tony Wawatie, another community spokesperson. “They don’t want to deal with a strong leadership, selected by community members who live on the land, that demands that the federal and Quebec governments implement the outstanding agreements regarding the exploitation of our lands and resources.”

Under Barriere Lake’s customary governance code, participation in leadership selections is open only to those band members who live in the traditional territory and have knowledge of and connection to the land. This ensures that people who have a stake in the land and it’s health select leaders. But Indian Act band elections would open voting to individuals on the band registry list who do not live in the community’s territory.

The federal government has slightly delayed the date for the Indian Act band elections, announcing they will try to hold them on September 8, 2010.